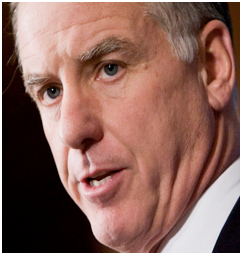 POLITICS - Howard Dean is my hero. No politician is perfect, and I don’t agree with him on everything.

But Howard Dean is why I got involved in progressive politics as an activist. Howard Dean’s insurgent campaign led me to believe that there was a reason to think that the Democratic Party could be more than the shadow of itself it had been since the 1970s.

And it was DNC Chairman Howard Dean’s call to progressives to get involved in local central committees that led me on the path to being a county party chair and state executive board member in California.

Howard Dean has just about had enough.

Howard Dean has had it with President Obama’s budget proposal, saying the plan put forward by the White House might just drive him from the Democratic Party he once led as DNC chair.

On Sunday night, Dean tweeted that the restoration of some defense sequestration cuts contained in Obama’s budget proposal were a step too far when coupled with the president’s entitlement cut proposal that progressives like Dean are already livid about.

“If this is true I may have to become an independant [sic],” Dean wrote, before linking to an April 10 article by Bloomberg BusinessWeek’s Josh Green.

Dean doubled down on his threat to leave the party in an interview with BuzzFeed Monday. The White House did not respond directly, but an official did push back Monday on the thrust of Dean’s attacks.

“I just think that’s unacceptable,” Dean said. “If this passed I would have to reevaluate if I belong in the Democratic Party. If this were passed with Democratic votes, I think it would be impossible to be Democrat.”

“I would have to oppose any Democrat that is supportive of this,” Dean added.

I don’t disagree. The direction of the national Democratic Party is totally unacceptable under current leadership. The reason I stay involved is that California Democrats are a mostly bright spot.

At our convention we passed a number of progressive resolutions, including one written by CDP Chairman John Burton unequivocally rejecting Social Security cuts.

How the folks in DC can countenance what has happened to the national Party is anyone’s guess.

But I stand with Howard Dean in his disgust.

(Digby is the pseudonym of progressive political blogger Heather Parton from Santa Monica, California who founded the blog Hullabaloo… where this commentary first appeared.)
-cw