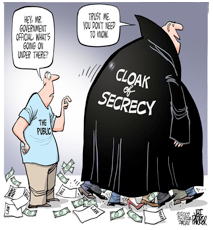 POLITICS - California is home to Silicon Valley, so you think we could bring some of that innovation to bear on our state government.

But one look at the Cal-Access contribution information website will quickly disabuse any user of that notion. But more than that, the state lacks the kind of transparency tools that other states provide. That yields a failing grade in the US-PIRG's report on state government transparency.

The report describes California as a "failing state" because, even though it contains some checkbook-level data for contracts and grants, it lacks other important information to allow residents to monitor state spending, including checkbook-level data on non-contract spending and information about which companies benefit from economic development tax credits.

One of the more interesting aspects of the Stimulus package of spending was the clean and easy to use website, Recovery.gov, that the federal government set up to track spending. But here in California, where spending will directly impact our daily lives, that data just isn't easily tracked anywhere. If Utah can do it, and their transparent.utah.gov website is pretty slick, why can't California do it?

And while there are a few random attempts to improve transparency, it certainly has been Sen. Leland Yee's focus for a while, there hasn't been any systemic path towards greater transparency in state government. (Sen. Yee is also carrying SB751, a bill that calls for greater transparency, but is, in all likelihood a target for gut and amend in the future.)

On the other hand, some municipalities are making an effort on this front. San Francisco has set up a website, with APIs, for a slew of data. And other cities are working towards better transparency, but the process is slow and totally inconsistent.

If we are to improve in this area, it will have to come from the top, with at least a modicum of funding. But despite the cost, transparency has a way of paying for itself in reduced waste and a better and more informed democracy.

(Brian Leubitz holds a law degree from the University of Texas and a Master of Public Policy (M.P.P) from the Goldman School at The University of California, Berkeley. He is the publisher and editor of Calitics.com where this piece was first posted.) –cw