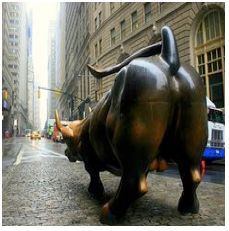 MARKET POLITICS - On Tuesday the Dow Jones Industrial Average rose above 14,270 – completely erasing its 54 percent loss between 2007 and 2009.

The stock market is basically back to where it was in 2000, while corporate earnings have doubled since then.

Yet the real median wage is now 8 percent below what it was in 2000, and unemployment remains sky-high.

Why is the stock market doing so well, while most Americans are doing so poorly? Four reasons:

First, productivity gains. Corporations have been investing in technology rather than their workers. They get tax credits and deductions for such investments; they get no such tax benefits for improving the skills of their employees. As a result, corporations can now do more with fewer people on their payrolls. That means higher profits.

Second, high unemployment itself. Joblessness all but eliminates the bargaining power of most workers – allowing corporations to keep wages low. Public policies that might otherwise reduce unemployment – a new WPA or CCC to hire the long-term unemployed, major investments in the nation’s crumbling infrastructure – have been rejected in favor of austerity economics. This also means higher profits, at least in the short run.

Third, globalization. Big American-based corporations have been expanding and hiring around the globe where markets are growing fastest – even while the U.S. market is lackluster. Tax policies and trade policies have encouraged them.

Finally, the Fed’s easy-money policies. They’ve pushed investors into the stock market because bond yields are so low. On Tuesday, the yield on the 10-year U.S. Treasury note was just 1.9%.

All of this spells widening inequality in America, because the people who invest the most in the stock market have high incomes. Those who rely most on wages have lower incomes.

Corporate profits are claiming a larger share of national income than at any time in 60 years, while the portion of total income going to employees is near its lowest since 1966.

As my colleague Immanuel Saez recently found, all the economic gains between 2009 and 2011 (the last year for which data were available) went to the richest 1 percent of Americans. The bottom 99 percent has continued to lose ground.

And yet the tax code continues to give preference to capital gains over ordinary income — a huge boon to investors.

The sequestration is likely to make all this worse, since it will slow the U.S. economy and keep unemployment higher than otherwise.

It will also hurt the most vulnerable. Some $1.9 billion in low-income rental subsidies are being eliminated, affecting 125,000 people. Cuts to the Department of Agriculture will eliminate rental assistance for another 10,000 low-income rural people. Meanwhile, 100,000 formerly homeless Americans are likely to be removed from their current emergency shelters.

More than 3.8 million Americans receiving long-term unemployment benefits will have their monthly payments reduced by as much as 9.4 percent, and lose an average of $400 in benefits over their period of joblessness.

The Department of Education’s Title I program, which helps schools serving more than a million disadvantaged students, will be cut $715 million, and $400 million will be cut from Head Start, the preschool program for poor children. And major cuts will be made in the Special Supplemental Nutrition Program for Women, Infants, and Children, which provides nutrition assistance and education.

The health of an economy is not measured by the profits of corporations headquartered within it or the value of its stock market. It depends, rather, on how many of people have jobs and whether those jobs pay decent wages.

By this measure, we are a long way from economic health. Rarely before in American history have public policies so blatantly helped the most fortunate among us, so cruelly harmed the least fortunate, and exposed so many average working Americans to such widespread insecurity.