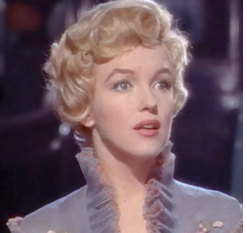 CELEBRITY POLITICS - FBI files on Marilyn Monroe that could not be located earlier this year have been found and re-issued, revealing the names of some of the movie star’s communist-leaning acquaintances who drew concern from government officials and her own entourage.
But the files, which previously had been heavily redacted, do not contain any new information about Monroe’s death 50 years ago. Letters and news clippings included in the file show the bureau was aware of theories the actress had been killed, but they do not show that any effort was undertaken to investigate the claims. Los Angeles authorities concluded Monroe’s death was a probable suicide.

Recently obtained by The Associated Press through the Freedom of Information Act, the updated FBI files do show the extent the agency was monitoring Monroe for ties to communism in the years before her death in August 1962.
The records reveal that some in Monroe’s inner circle were concerned about her association with Frederick Vanderbilt Field, who was disinherited from his wealthy family over his leftist views.
A trip to Mexico earlier that year to shop for furniture brought Monroe in contact with Field, who was living in the country with his wife in self-imposed exile. Informants reported to the FBI that a “mutual infatuation” had developed between Field and Monroe, which caused concern among some in her inner circle, including her therapist, the files state.
“This situation caused considerable dismay among Miss Monroe’s entourage and also among the (American Communist Group in Mexico),” the file states. It includes references to an interior decorator who worked with Monroe’s analyst reporting her connection to Field to the doctor.
Field’s autobiography devotes an entire chapter to Monroe’s Mexico trip, “An Indian Summer Interlude.” He mentions that he and his wife accompanied Monroe on shopping trips and meals and he only mentions politics once in a passage on their dinnertime conversations.
“She talked mostly about herself and some of the people who had been or still were important to her,” Field wrote in “From Right to Left.” ”She told us about her strong feelings for civil rights, for black equality, as well as her admiration for what was being done in China, her anger at red-baiting and McCarthyism and her hatred of (FBI director) J. Edgar Hoover.”
Under Hoover’s watch, the FBI kept tabs on the political and social lives of many celebrities, including Frank Sinatra, Charlie Chaplin and Monroe’s ex-husband Arthur Miller. The bureau has also been involved in numerous investigations about crimes against celebrities, including threats against Elizabeth Taylor, an extortion case involving Clark Gable and more recently, trying to solve who killed rapper Notorious BIG.
The AP had sought the removal of redactions from Monroe’s FBI files earlier this year as part of a series of stories on the 50th anniversary of Monroe’s death. The FBI had reported that it had transferred the files to a National Archives facility in Maryland, but archivists said the documents had not been received. A few months after requesting details on the transfer, the FBI released an updated version of the files that eliminate dozens of redactions.
For years, the files have intrigued investigators, biographers and those who don’t believe Monroe’s death at her Los Angeles area home was a suicide.
A 1982 investigation by the Los Angeles District Attorney’s Office found no evidence of foul play after reviewing all available investigative records, but noted that the FBI files were “heavily censored.”
That characterization intrigued the man who performed Monroe’s autopsy, Dr. Thomas Noguchi. While the DA investigation concluded he conducted a thorough autopsy, Noguchi has conceded that no one will likely ever know all the details of Monroe’s death. The FBI files and confidential interviews conducted with the actress’ friends that have never been made public might help, he wrote in his 1983 memoir “Coroner.”
“On the basis of my own involvement in the case, beginning with the autopsy, I would call Monroe’s suicide ‘very probable,’” Noguchi wrote. “But I also believe that until the complete FBI files are made public and the notes and interviews of the suicide panel released, controversy will continue to swirl around her death.”
Monroe’s file begins in 1955 and mostly focuses on her travels and associations, searching for signs of leftist views and possible ties to communism. One entry, which previously had been almost completely redacted, concerned intelligence that Monroe and other entertainers sought visas to visit Russia that year.
The file continues up until the months before her death, and also includes several news stories and references to Norman Mailer’s biography of the actress, which focused on questions about whether Monroe was killed by the government.
For all the focus on Monroe’s closeness to suspected communists, the bureau never found any proof she was a member of the party.
“Subject’s views are very positively and concisely leftist; however, if she is being actively used by the Communist Party, it is not general knowledge among those working with the movement in Los Angeles,” a July 1962 entry in Monroe’s file states.
(Anthony McCartney writes for the Associated Press. This report was posted earlier at HuffingtonPost.com)
-cw
CityWatch
Vol 11 Issue 1
Pub: Jan 1, 2013