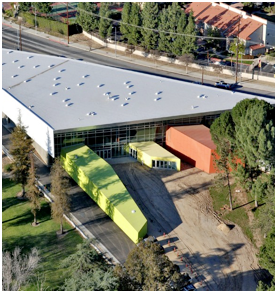 LA WATCHDOG - On Friday, our increasingly desperate City Council approved the “final development” of the troubled Children’s Museum / Discovery Science Center of Los Angeles (the “Children’s Museum”) and its $21 million financial plan.
An integral part of this plan includes the looting of our Department of Water and Power for $3.9 million and the Bureau of Sanitation (part of the Department of Public Works) for $3.6 million, a total of $7.5 million.
Needless to say, the proponents of this scam, led by termed out Richard Alarcon, dressed this project up by claiming it is “something special for our children” and promoting the benefits of environmental awareness, conservation, sustainability, and recycling, right up there with apple pie and motherhood.

But all this hot air from the City Council barnyard is not supported by any facts, figures, or analysis that would confirm the economic feasibility of this hare brained scheme cooked up in the bowels of City Hall over ten years ago.
For example, what is the market and who are the patrons for this architectural eyesore that is inconveniently located in the far northern reaches of the City, in the flood prone Hansen Dam complex, 20 miles from City Hall, 30 miles from South Central LA, 44 miles from San Pedro, and over 20 miles from the West Valley?
There is not any analysis of the Children’s Museum operating budget that is showing a $5 million loss over the next five years.  But these losses, the responsibility of the City’s General Fund, are probably overly optimistic as the projections assume flat operating expenses and consistent increases in admission revenue, fund raising, and third party service contracts.
In addition, there are no definitive plans or budget for DWP’s exhibit, meaning that DWP and Ratepayers are writing a blank check to the Children’s Museum for $3.9 million.
But perhaps we should be grateful that it is only $3.9 million, not the originally planned $5 million envisioned by the designated operators of the facility, the Discovery Science Center of Orange County.
As for DWP’s investment in the Children’s Museum, this expenditure was not in the Department’s budget, a sure sign that Alarcon forced the DWP to fund this albatross in return for his not opposing the recent 11%, $330 million increase in our power rates over the next two years.
Unlike DWP that at least prepared a memo which was the subject of debate by the DWP Board of Commissioners meeting where one of the four members present dissented, the million dollar Commissioners of the Board of Public Works, consisting primarily of public interest lawyers who lack the necessary operational, administrative, and financial experience to oversee this $2 billion operation, did not even prepare a memo or discuss its $3.6 million investment in any meaningful detail.
But that is not surprising since the President of the Board of Public Works is Andrea Alarcon, the 33 year old daughter of Richard Alarcon appointed by Mayor Villaraigosa.
It is also no surprise that this significant expenditure of funds by DWP and the Bureau of Sanitation was not reviewed by the Energy and Environment Committee chaired by Alarcon’s politically ambitious cohort, Jose Huizar.
Furthermore, there was not adequate time for the Ratepayers Advocate to review and analyze this inappropriate use of Ratepayer funds.
Underlying the City’s motivation - where it is throwing in good money to salvage a rotten investment - is the effort to save $16 million that would City would be obligated to repay if the Children’s Museum is not opened by March 31, 2015.
But does this justify the expenditure of another $21 million plus the funding of operating losses that will more than likely exceed $5 million?
Rather than continuing with this folly and fleecing the DWP Ratepayers and the citizens that are funding the Bureau of Sanitation, the City should cut its losses and outsource the operations, management, and finances of the Children’s Museum / Discovery Science Center of Los Angeles to a private operator.
As the City faces operating deficits over the next four years totaling $1.1 billion, it is time for the City to realize it cannot be everything to everybody.  Otherwise, the City will eventually be insolvent.
(Jack Humphreville writes LA Watchdog for CityWatch. He is the President of the DWP Advocacy Committee,  the Ratepayer Advocate for the Greater Wilshire Neighborhood Council, and a Neighborhood Council Budget Advocate. Humphreville is the publisher of the Recycler Classifieds -- www.recycler.com. He can be reached at: lajack@gmail.com)
-cw
CityWatch
Vol 10 Issue 101
Pub: Dec 18, 2012