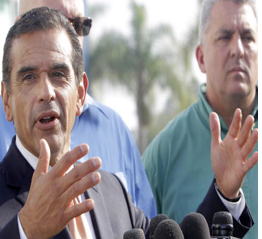 AT LENGTH - On Nov. 27, while most of us were recovering from stuffing ourselves on Thanksgiving turkey, and others were counting down the days to the end of the Mayan calendar (Dec. 21), the Office Clerks Unit of the International Longshore Workers Union local 63 at the Port of Los Angeles went out on strike. The cause for this action was obscured by the corporate media speaking on behalf of the shipping companies for their own slant on the negotiations and their goal to “outsource” certain technology jobs outside of union jurisdiction.

The issue seemed pecuniary and small. Just 51 jobs out of roughly 600 union positions and the shipping companies were accusing the union of wanting “featherbedding” contract language requiring artificial staffing levels. And the mainstream press mindlessly kept repeating the narrative that the strike caused an estimated loss of $1 billion per day, just as it had during the 10-day 2002 lockout. None of this was accurate.
But the value of the diverted cargo was not lost because of the delay, even though there may be added costs to the delivery. Nor was the core issue about preserving jobs for the sake of keeping a job.  The issue was wrapped up in something called the “Framework for Special Agreement on Application of Technologies and Preservation of Marine Clerk Jurisdiction,” dated November 23, 2002.  It's now simply referred to as the “Technology Framework.”
The dispute here is whether the employers have the right under current working agreements to outsource jobs to non-union workers, often out of state, due to attrition, vacancy or retirement. With the increased use of technologies now available, remote inputting and tracking of cargo could be done anywhere. This has been an ongoing conflict since the OCU contract ended in June of 2010 and has been the subject of ongoing negotiation ever since. In frustration, the union finally decided they had no alternative but to strike, in order to make their point.
The reason this dispute ballooned into such importance—a strike action that brought in the leadership from the International ILWU, the mayor of Los Angeles and ultimately federal arbitrators—is that it is seen as a precursor to the larger Longshore Division contract coming up in 2014.
The outsourcing issue will continue to be an issue in the years to come, particularly in the next round of contract negotiations. This won't affect just the OCU workers, but the entire 20,000 ILWU workforce from Seattle to San Diego. So this was just the preliminary bout that gave the parties the opportunity to size each other up, and see how the Obama Administration would react and whether the union was organized enough to fight this drift toward outsourcing their jobs.
The ILWU stood their ground for now. But it needs to more fully explain its motto of “an injury to one is an injury to all” in fighting to preserve just 51 jobs. Even more so, the union's considerable ability to rally its members, to recognize and support a picket line tends to distract from its inability to communicate its position outside of the union hall—something that the legendary Harry Bridges excelled at, but which the union as a whole seems to have forgotten.
They still have a problem responding effectively to the media, who generally don't get or are downright hostile to organized labor initiatives. This may involve some training in new technologies and communication strategies, tools for which they may need, oddly enough, to outsource.
At least for now, the issue is settled, pending  ratification by the OCU members.  But the countdown to the 2014 contract negotiations is hovering like the end of the Mayan calendar, which I imagine was caused by a premature strike by the stonecutters, not some astronomical prediction.
The Mayan stonecutters were probably underpaid, overworked and when they went on strike were likely sacrificed to one of their gods. It's doubtful that they had collective bargaining rights.
As for our illustrious Mayor Antonio Villaraigosa, his involvement in this drama is just a dress rehearsal for his future position in the Obama administration in the Department of Labor, or perhaps the Department of Homeland Schmoozing. He's a real pro at working the room. A job that's hard to outsource to just anybody!
(James Preston Allen is the Publisher of Random Lengths News and an occasional contributor to CityWatch. More of Allen and other views and news at  randomlengthsnews.com where this column was first posted) –cw
CityWatch
Vol 10 Issue 100
Pub: Dec 14, 2012