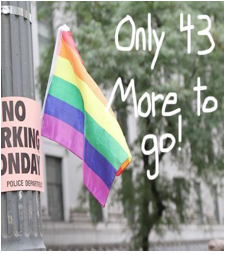 GUEST EDITORIAL - For 14 years, same-sex marriage proponents lost every popular vote. But the 2012 general election may well be remembered as the day that changed all that when three states — Maine, Maryland and Washington — approved ballot measures to extend marriage rights to same-sex couples. Nine states plus the District of Columbia now recognize marriage for gay and lesbian couples. This is progress.

It was just over two years ago that a major national poll first found a narrow majority of Americans supported same-sex marriage. But it wasn't until this election that the shift in attitudes was reflected at the ballot box. Since 1998, voters have voted 32-0 in state elections to ban same-sex marriage. This lopsided voting record had been a powerful argument of those fighting against marriage equality.
They claimed that while some courts and legislatures had approved same-sex marriage, when the question was put to voters it was uniformly rejected. Even the liberal state of California passed Proposition 8 in 2008 limiting marriage to a man and a woman.
Now it appears the tipping point may have been reached. In addition to voters in three states approving same-sex marriage, Minnesotans voted against a constitutional ban on same-sex marriage. And the first U.S. president in history to declare his support for same-sex marriage while in office — Barack Obama — was decisively re-elected.
There are two reasons to believe it is only a matter of time before marriage equity extends to every state, including the dozens like Florida that ban the practice in their state Constitutions. First, demographics. Young people support same-sex marriage by large margins. Second, the federal courts may decide the issue, as the US Supreme Court did in 1967 by striking down state laws that barred interracial couples from marrying.
Later this month the US Supreme Court will decide whether it will take up challenges to (California’s Prop 8 and) the Defense of Marriage Act, the 1996 law passed when just 25 percent of the electorate supported gay marriage rights. The law prevents the federal government from recognizing the legitimacy of same-sex marriages. Lower federal courts have said the act is an unconstitutional violation of equal protection for gays and lesbians, preventing duly married same-sex couples from enjoying federal benefits such as Social Security survivor benefits.
The election signaled the rewards of a 40-year organized struggle for equality and acceptance. Most Americans would grant gay and lesbian couples their full complement of human rights, including the right to form loving families. The only question now is how long it will take states like Florida to do the same.
(This is a Tampa Bay Times editorial posted first at TampaBay.com and later at CommonDreams.org.)
-cw
CityWatch
Vol 10 Issue 95
Pub: Nov 27, 2012