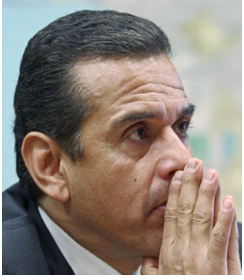 INSIDE CITY HALL - City Hall is talking taxes again. With about a third of the Fiscal Year gone, our leaders say they’ll need an additional $220 Million to make it through the year. Moreover, they say they’ve cut just about everything they can cut, so they’ve decided to consider putting a tax-hike proposal on the March 5, 2013 ballot.
While I won’t comment here on the City’s current financial problems, I do have a few suggestions I’d like City Hall to consider. These are not new ideas. They were previously offered in a letter to the Chairman of the Council’s Budget Committee. My guess is they were probably dismissed without discussion. But now, with an ongoing financial crisis, these ideas may be considered.

1. Replace the full-time Board of Public Works Commissioners with a part-time Board. Over the years, this recommendation has been submitted at least 20 times by various organizations. All those recommendations were dismissed for the same political reason. The fact is a full-time Board offers the Mayor five cushy jobs to give his campaign contributors.  And the taxpayers get stuck with the bill. That’s not fair; it must not continue!
2. Reduce the number of exempt Aides currently employed in the Mayor’s Office and in the City Council. Based on the most recent statistics available, the Mayor and Council together have budget authority to employ 125 exempt Aides—80 in the Mayor’s Office and 45 in the Council. But in their Personnel Ordinances, the Mayor and the Council give themselves an additional 375 Aides. Together, they employ 500 exempt Aides—185 Mayoral Aides and 315 Council Aides. Instead of laying off 200 employees in the Police Department and the City Attorney’s Office—as has been proposed—the Mayor and Council should lay off 200 exempt Aides.
3. Reduce the number of Management positions in City Service. A survey of 34 City departments counted I29 management-level positions. That’s about 3.8 Managers and Assistants / Deputies per department. Considering that 12 City departments have fewer than 200 employees, are all those expensive Deputies/Assistants really necessary?  An objective audit may well indicate that the City organization would not collapse if 20 or 30  high-level employees were laid off. Such an audit may even show that fewer deputies and assistants would make certain departments more efficient.
4. Improve the management of employee performance. The combined work force of 34 budgetary departments costs the taxpayers over 4 Billion dollars a year. Yet in most of those departments employees are hired on the basis of an invalid working test. And the annual evaluation of vested employees is conducted with appraisals that are inherently unreliable. Moreover, City departments don’t require employees to meet job-related performance standards. It’s clear to everyone but the City Bosses that significant savings could be achieved by replacing archaic personnel practices, by training supervisors, and by acknowledging that employees are the City’s most valuable asset. Such changes would enhance both employee morale and employee productivity.
5. Expand the use of one-officer patrol cars in the Police Department. I believe  this could be done without exposing Police Officers to greater danger. No employer would knowingly send two employees to do a job that could be performed well and safely by one employee. If there are opportunities to safely expand the use of one-officer patrol cars, our leaders should be willing to use them. The opportunity for significant savings should move City Hall to give this suggestion the consideration it deserves.
OK. These suggestions are being sent to City Hall in Los Angeles. If YOU think they deserve thoughtful consideration, you may want to contact the Mayor at (213) 978-0600, or E-mail him at mayor@lacity.org.
(Samuel Sperling is a City Hall watchdog who writes for the Tolucan Times. Check out other writers and reporters … including Greg Crosby … at tolucantimes.info) You can reach Samuel Sperling at: samuelmsperling@yahoo.com.) –cw
CityWatch
Vol 10 Issue 95
Pub: Nov 27, 2012