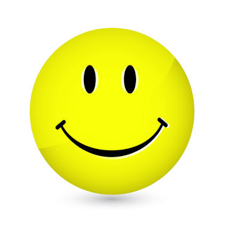 HAPPY MESSAGING - Picasso said, “Art is a lie that tells the truth.”  Nowadays, there’s less truth to that, as the creative process is increasingly about prettying up and papering over what’s broke.
More on that shortly, but first, about the breakage: it’s legitimate. Said Nobel laureate Joseph E. Stiglitz in a recent NY Times piece that plain-talks our economic conditions: “Increasing inequality means a weaker economy, which means increasing inequality, which means a weaker economy.”

That assessment—from a very smart man studying the problem—isn’t good. But in the American feel-good milieu you wouldn’t know it: “We’re coming out if it.” “Tomorrow is forever.” “Start-ups will save the US” Etc. And while tone deaf, this kind of brushing off of problems isn’t new, but part of what social critic Barbara Ehrenreich refers to as America’s “cult of cheerfulness”, and it’s a “cult” that has spawned a longstanding and growing American feel-good industry.
Recently, researcher Jeff Faux—in his book The Servant Economy: Where America’s Elite is Sending the Middle Class—says the feel-good industry has disarmed social urgency and unrest with “cheerful denial”, particularly as it relates to declining standards of living. Faux writes:
[T]he positive-thinking industry has gone from publishing self-improvement books and training sales people to smile even when they don’t feel like it to loosely constructed system of social engineering that distracts and discourages Americans from dealing with what is happening to their society.
This form of social control is wide and far-reaching, ranging from the smiley face Wal-Mart logo to motivational seminars for laid off workers that spoon feed a “can do” attitude like it’s castor oil, regardless if it is the context that really “can’t.” Increasingly, cheerful denial has become the purview of artists and designers; that is, instead of using aesthetics to tear down—like did Picasso, Duchamp, and Matta-Clark—we use aesthetics to prop up.
Enter placemaking, or that medium of developing “place” in our cities through shared efforts of artists and designers alike.
Placemaking does a lot of good. Parks, festivals, and various urban design interventions can create for a myriad of positive attributes related to happiness, worth, and reinvestment. But placemaking in its pervasive search for vibrancy can often come off as Pollyannaish, or yet another means at happy messaging. At its worst, placemaking not only distracts from pressing concerns if only to provide a place to collectively clap, but—when done in exceedingly high rent spots continuously immune to economic downturns—can also serve to reinforce the bubble mentality of the elite.
One needs to go no further than America’s cultural capital, New York City, to see this operating. For instance, in a recent article called the “How Rust Became the New Urban Luxury Item”, the author talks about how the aesthetic of rust is being remade from a reality into a motif. The new billion-dollar Barclays Center was made rusty on purpose, and a new section of the High Line—the park made from an abandoned rail line—will most certainly retain its wear, with its decay polished if need be.
Why is this occurring? The author writes:
[R]ust has become fashionable. It’s a sign of street cred, kind of like the pre-fab holes in a pair of $500 designer jeans…
…The kind of rust you find on the Barclays Center and in the refurbished High Line park is a luxury item. In places like Cleveland and Detroit and the parts of New York without corporate sponsorship, rust is still just rust.
There is a lot of truth there: rust is still just rust in places that have come to exist in post-industrialization, but for others: rust is luxury, rust is christened from the landscape of one’s hard times up to the decor of the powerful’s play areas.
On one hand, there is nothing new here. Beautification efforts to attend to social ills is a longstanding method of inflicting good feelings over hard realities. There was the City Beautiful Movement, the Urban Renewal Movement, etc. But what’s rarer is the fact that the aesthetics of disinvestment—in this case rust, and its “hard time” connotations—are being brought in to “dirty” the pretty up. In other words, by “street cred-ing” spaces for the elite, design is used to legitimize the extravagant via images of the honest-to-god consequences of the all-too every day.
The problem of course is that it elevates how things look and feel in places like the Rust Belt into a luxury status. But in reality, the Rust Belt has been anything but. And while rust is a genuine and pulsating aesthetic in post-industrial America, it is more so akin to the look of a scar: or a character-molding image of resilience that’s now part of the culture’s flesh, and as such can come off as lame when it’s fabricated to make the appearance of something look “harder” than what is.
Of course this adopting of the Rust Belt aesthetic is but part of a cultural authenticity movement that has been going on for some time. People are tiring of the flighty, ephemeral, and the rootless. People want reminders of where America came from and the fight it has in it. But designing for authenticity, according to scholar Jeanne Liedtka, is not only foolhardy—“the authentic emerges; it is not summoned…”—but yet another indication that America is spending more energy on faking it then fixing it.
(Richey Piiparinen is a writer and policy researcher based in Cleveland. He is co-editor of Rust Belt Chic: The Cleveland Anthology. This piece originally appeared at his blog.)
Tags:
CityWatch
Vol 10 Issue 94
Pub: Nov 23, 2012