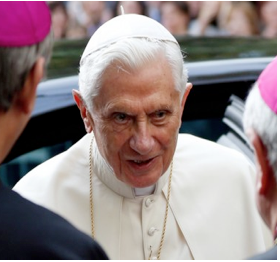 RELIGION & POLITICS - In light of stunning, sweeping gains for marriage equality not just in last week’s United States elections but in France and Spain, it was inevitable that the men in long dresses and funny hats would get their dander up. But what’s most laughably ridiculous about the Vatican’s latest outburst against LGBT rights is that it just can’t let go of one of the oldest, dumbest arguments against them in the world.
In an editorial this weekend, Vatican chief spokesman Father Federico Lombardi — the guy who thinks the Church’s widespread sexual abuse crisis needs to be viewed within, I’m not even kidding, “the more general context of secularization” — affirmed that “monogamous marriage between a man and woman is an achievement of civilization.”

And then he added, “If not, why not contemplate also freely chosen polygamy and, of course, not to discriminate, polyandry?”  Why not? If two men can pledge their love in a legally recognized union, who’s to stop a woman from marrying a wedge of cheese, right? I mean, where does it end?
Father Lombardi isn’t the first person with a head full of faulty logic to trot out the “This slope! It’s just so darn slippery!” argument, of course. Last month, US Rep. Judy Biggert declared, when pressed about same-sex unions on a campaign stop, “You know, we don’t have polygamy and bigamy and all of these things in, in the federal government. It’s the states that take care of that.” She lost the election, by the way.
And why limit the comparing same-sex unions to polygamy? Why not any crazy-ass combination at all? (Read more.)
(Mary Elizabeth Williams is a staff writer for Salon.com … where this article was first posted … and the author of "Gimme Shelter: My Three Years Searching for the American Dream."  Follow her on Twitter: @embeedub. More Mary Elizabeth Williams.)
-cw
CityWatch
Vol 10 Issue 91
Pub: Nov 13, 2012