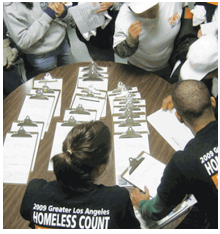 URBAN PERSPECTIVE - The homeless count for South Los Angeles is happening on January 31, 2013. Thousands of volunteers are needed to ensure an accurate count for South LA.
The Los Angeles Homeless Authority (LAHSA) administers the count every two years. The count consists of counting people on the streets, shelters, and other institutions that come in contact with homeless people. The information gathered is used to determine the distribution of funding and resources and gives Los Angeles a better understanding of it homeless and their needs.

With recent interest in South LA to build capacity of its homeless nonprofit sector and more resources based on data identifying the area with the second highest homeless concentration, the count will be an important justification for more financial and capital investment from government and private philanthropy.
South LA is very interesting when it comes to counting. Although there are prominent and established programs in the area, much of the homeless service delivery operates under the radar. There are religious groups, transition homes, good-will citizens, and other service Samaritans who help homeless people that don’t get recognition for it or want to remain discrete. These groups don’t show up on the inventory for counting; and consequently, the homeless they serve are not counted.
These unreported or unrecognized groups are extremely important this year to the count as they may include important demographic information about South LA’s homeless.
As a community tool, the 2013 homeless count may substantiate what South LA advocates have been saying the past two years, homelessness is on the rise.
The visibility of homelessness in the west and central areas of South LA is prevalent now than in past years. Van Ness Park on the corner of Slauson and Van Ness is home to more than 10 to 20 homeless every night. The homeless there are neighborhood locals who either lost their housing, employment, or family support; or suffer from mental illness or substance abuse. Most are 55 years of age or older. They find comfort in the park because it is clean and safe. Also, transportation and proximity to recycling centers and other resources make the park an attractive place to live.
South LA’s cultural center, Leimert Park, has been a major problem since 2007. Some residents and businesses believe that the homeless are an impediment to urban revitalization if solutions aren’t offered.
Homeless estimates for the Leimert Park area, including Rancho Cienega Park is near 200 people. Responsibly, the community has been advocating for more than five years for homeless resources including a dedicated homeless street outreach team and places for the homeless to go for shelter and services.
Along Florence, Western, Manchester, and Crenshaw Avenues and King Boulevard, homeless are living in abandoned buildings or their own cars, lining the sidewalks, sleeping at bus shelters or in church doorways, or posting up in alley ways.
According to LAHSA’s 2011 homeless count, there are approximately 51,430 homeless in Los Angeles County, of which 8,735 are from South LA. The 2013 homeless count will inform of changes in homeless numbers and the impacts of the economy, if any. Furthermore, it will illustrate what advocates have been saying for years – South LA isn’t getting its fair share.
South LA neighborhood councils, block clubs, residents, and businesses are urged to volunteer for the homeless count. Interested individuals and groups can get more information about the 2013 homeless count by visiting www.theycountwillyou.org.
-cw
(Janet Denise Kelly is a CityWatch featured contributor. She offers more than a decade of accomplishments in the housing and nonprofit sector. Janet brings valuable insight in the areas of community and economic development. Additionally, she brings knowledge regarding the leadership and management challenges faced by large and small nonprofits that are struggling or growing organizations. She blogs at jdkellyenterprises.org and can be reached at: janetdkelly@yahoo.com) –cw
CityWatch
Vol 10 Issue 91
Pub: Nov 13, 2012