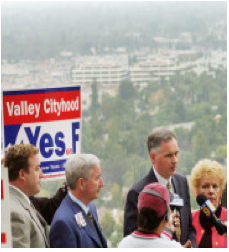 RETROSPECTIVE - ON the wall of my home office hangs a framed picture that I treasure as a symbol of the million or more stories I wrote or edited in my four decades as a newspaperman, a single front page dated May 26, 1996.
"What if the Valley were . . . THE CITY," reads the headline above an artist's map of the San Fernando Valley, the place I've called home for so long I can hardly remember all the other places I lived.

"America's safest, richest city," declares the headline beneath the picture. The story adds that the Valley would be America's sixth largest and most integrated big city, pushing the remaining portion of LA into third place behind Chicago.
It's the article that launched the San Fernando Valley secession movement, along with showing the Valley did not get - and still does not get - a "fair share" of city services while paying an inordinate share of city taxes.
In the late 1970s, the power elite of LA had made secession impossible. But the grass-roots yearning for independence and the Daily News' articulation of the issues forced the state Legislature - with bipartisan support from our own Assembly members Bob Hertzberg and Tom McClintock - to make secession at least theoretically possible.
Theoretically is the right word, since Valley cityhood never stood a chance because the law that was approved required a dual vote in support: the Valley and Los Angeles as a whole.
It was a brutal and unfair fight: A 10-1 financing advantage against secession and the rigid opposition of all those with power - the unions and special interests that feed off of City Hall and what passes for a civic elite. They all looked down their noses at the Valley, but they couldn't bear the thought of losing LA's middle-class cash cow.
Monday marks the 10th anniversary of the secession vote. Despite intense campaign against it, 50.7 percent of Valley voters supported cityhood. However, it lost citywide by a 2-1 margin.
As managing editor of the Daily News at the time, I believed the Valley had to stand up for itself and demand respect from City Hall. Secession was the best available tool to achieve that whether it succeeded or failed.
In recent years, as a blogger, columnist and citizen activist I have encountered hundreds of people in every part of the city who yearn to escape the clutches of the failed political machine that rules City Hall and ignores their values and needs.
My answer is always the same: It was a fixed game back then, and it still is today. If you want City Hall's respect, you are going to have to organize and seize power for yourselves. They will not give it to you.
Still, I wonder often about what might have happened - what if the Valley really was the city? What would be different?
I think we would all be better off.
The Valley would have faced a mountain of problems but in a radically different political climate. In a sign of the degree of civic engagement, more than 110 candidates ran for Valley mayor and 14 City Council positions, only two of them ever having held public office previously.
This would have been a part-time citizen government with districts a third the size of what they are now - not the nation's highest paid city officials. We now have professional politicians serving as LA council members and being paid about $180,000 a year with lucrative perks and pensions and 20 staffers coddling each of them.
We would be having fierce arguments out in public - not in back rooms where the narratives invented for public consumption that have little or nothing to do with what is really going on. Conflicts and passions would run deep because people would really have a say. There would be hope for resolution and progress in a more inclusive city.
Valley City would be able to fight for local, state and federal dollars on its own and in cooperation with neighboring cities that often are trampled by LA. And Valley City would be able to set policies that attracted new businesses and better balanced competing interests on development.
It wouldn't be paradise. There would have been no guarantee most people would feel they were better off.
But the Valley and its residents would not feel so powerless and alienated as they do today, as so many residents throughout the city feel. The answer to this discontent, I think, is the same today as it was back then: Breaking up the city is too hard to do - but changing the political environment is possible if we just have the will and the leadership.
(Ron Kaye is the former editor of the Los Angeles Daily News and founder of the Saving LA Project, SLAP. He now writes at his own blog:  RonKayeLA.com.  Ron can be reached at ron@ronkayela.com)
-cw
CityWatch
Vol 10 Issue 89
Pub: Nov 6, 2012