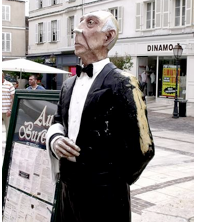 OTHER WORDS - Fire fighter, basketball player, lion tamer, teacher, nurse: Ask little kids what they want to be when they grow up, and you'll get all sorts of answers. But you'll never hear this one. You'll never hear youngsters say they want to devote their careers to serving rich people.

Today's youth might want to reconsider. They're facing an American economy where serving rich people increasingly seems to offer the best future with real opportunity. We're well on the way to becoming a full-fledged "servant economy," as the economist Jeff Faux puts it.
We've had "servant economies" in the world before. At times, people even rushed toward servant status. In the early industrial age, jobs in mines and factories would be dangerous and pay next to nothing. Domestic work for rich families could seem, by comparison, a relatively safe haven.
But that calculus changed as workers organized and won the right to bargain for a greater share of the wealth they were creating. Over the first half of the 20th century, America's super-rich lost their dominance, and fewer and fewer Americans worked as servants for them.
This state of affairs didn't last long. Since the late 1970s we've witnessed an assault on the building blocks of greater equality — strong unions, progressive taxes, regulatory limits on business behavior — that has hollowed out the American middle class.
Good manufacturing jobs have largely disappeared, outsourced away. Most Americans no longer make things. They provide services.
We could, of course, have a robust "service" economy, if we built that economy on providing quality services to all Americans. But providing these quality services, in everything from education to transportation, would take significant public investment — and significant tax revenue from America's rich.
A half-century ago, we did collect significant tax revenue from America's wealthy. No longer. Tax cuts have minimized that revenue and left public services chronically underfunded. That leaves young people today, Faux notes in his new book The Servant Economy, with a stark choice.
Young people can either become engineers and programmers and spend their careers in "pitiless competition with people all over the world" just as smart and trained but "willing to work for much less." Or they can join the servant economy and "service those few at the top who have successfully joined the global elite."
In this new "servant economy," we're not talking just nannies and chauffeurs. We're talking, as journalist Camilla Long notes, "pilots, publicists, art dealers, and bodyguards" — a "newer, brighter phalanx of personal helpers."
Want to see the world? In the new servant economy, you can become a "jewelry curator" and voyage to foreign lands to pick up gems for wealthy clients.
Want to face daily challenges? You can become a concierge and hire an elephant for a wealthy patron's wedding reception.
Or, if you lean traditional, you can always shell out $12,000 for a course that will certify you as a manservant in good standing with the Guild of Professional English Butlers.
A butler can annually pull in over $100,000. But serving the rich can be far more lucrative than that. Interior decorator Michael Smith pulled in an $800,000 fee for his work on a Wall Street CEO's office. John Blackburn, an architect in Washington, DC, specializes in designing horse barns for wealthy equestrians. His fee can run up to $300,000 per barn.
But we have a basic problem here. We have a limited pool of super-rich people who can afford to commission horse barns and hire elephants.
As of this past summer, calculates the Credit Suisse Research Institute, only 38,000 Americans had fortunes over $50 million. The entire world has only about 3 million people worth at least $5 million.
Even if those 3 million gave gainful "servant economy" employment to 100 people each, we would still have another 4 billion folks on the outside of the "servant economy" looking in.
The "servant economy" can only be a dead end. We need to change course.
(Sam Pizzigati edits Too Much, the weekly Institute for Policy Studies newsletter on excess and inequality. This column was provided to CityWatch by OtherWords.org a project of The Institute for Policy Studies.) -cw
CityWatch
Vol 10 Issue 88
Pub: Nov 2, 2012