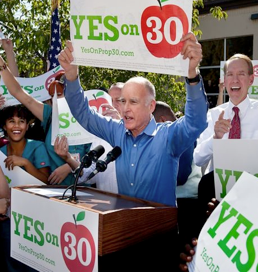 ELECTION 2012 - With the fall elections upon us, Californians are reeling under a weak recovery, enduring both historic levels of income inequality, and the most severe fiscal crisis in recent history. To address the crisis we must have some common sense remedies: raise taxes on the wealthy and build a movement for a fair and more equitable tax system.

Income inequality has exploded over the last two decades in both the nation and California. UC Berkeley economist Emmanuel Saez has documented that the share of national income received by the upper 1 percent more than doubled from 9 percent in 1979 to an astonishing 23 percent in 2007. The richest 1 percent raked in a staggering 60 percent of the national income gains over these three decades, while the bottom 90 percent received just 9 percent.

The wealthiest Californians are grabbing an ever-larger slice of the pie compared to the bottom 90 percent. The CBP report indicates that between 1987-2009 the top 1 percent of Californians received more than one-third of the income gains and the top 10 percent received three quarters.

At the bottom, working people in California face extreme hardship and cannot make ends meet. According to the Public Policy Institute of California, 16 percent of California families were in poverty in 2010, and 36 percent, the working poor, earned incomes of less than $44,000 annually. That’s the minimum amount required for a family of four to pay for basic needs such as shelter, food, health care, transportation, and childcare.

Despite the stunning growth of their incomes, the upper 1 percent of California‘s income earners pays less state personal income taxes than they did two decades ago; and since 1981, state revenue from corporate income taxes has declined by one-half.

Overall, the California state tax system is modestly regressive. Measured as a share of family income, when all state and local taxes are combined (including personal, property, sales and other taxes), low and middle income California taxpayers pay proportionately more taxes than the upper 1 percent.

Isn’t the need for more revenue from the wealthy obvious? The state budget deficit is now as much as $16 billion, and Proposition 30, or the ‘Schools and Public Safety Act,’ on the November ballot will raise $8.5 billion in new revenues in 2012-2013 by boosting the personal income taxes on the wealthy for the next seven years to pay for public education and public services.

The ballot measure also includes a quarter cent temporary sales tax hike that will affect all Californians. On balance, the top 1 percent of California taxpayers, whose incomes ballooned to $1.7 million in 2012, will pay nearly 80 percent of the new state tax. The typical California taxpayer will experience only an annual $24 aggregate sales tax increase over four years.

The Occupy movement has begun to reframe the public dialogue about our national priorities and has demanded that government address the growing rift between the rich and poor.

Polling indicates a majority of California voters supports Proposition 30, and overall, the public believes the wealthy should pay their fair share. The proposition is the most progressive tax increase in recent California history - but it is not a cure-all. It’s really just a first step towards a more equitable tax system. Proponents intend to propose new ballot propositions each election cycle to completely overhaul how the state raises revenue.

During the Great Depression in the 1930s, the nation's worst economic crisis, President Franklin D. Roosevelt declared, "our revenue laws have operated in many ways to the unfair advantage of the few, and they have done little to prevent an unjust concentration of wealth and economic power.”

Roosevelt's landslide re-election in 1936 indicated a value shift in American culture and popular support for public policy to address economic inequality and to regulate big business and large financial institutions. That’s the kind of shift in values we need today, and approval of Proposition 30 will indicate we’re making it.

(Martin J. Bennett teaches American history at Santa Rosa Junior College, serves as Co-Chair of the Living Wage Coalition of Sonoma County, and is a member of the California Federation of Teachers Local 1946. This piece was posted first at beyondchron.org)
-cw