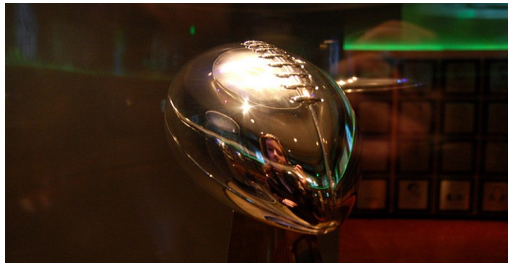 ZOCALO PUBLIC SQUARE - January 31, 2016: I can see it now. Super Bowl L. Yep, the big game is turning the big 5-oh. Farmers Field in the heart of Los Angeles is a madhouse. Brett Favre, who came out of retirement in 2012 and 2014, leads the Green Bay Packers out of the tunnel. Mayor Johnson is here, wearing his old Lakers jersey over his suit. Governor Shriver is here, without her ex-husband or any of his many kids. President is here sporting a cheesehead. Justin Timberlake, who turns 35 today, will sing at the half. If 11 football players from each side can avoid a concussion, there will be a second half.

Welcome to the first Super Bowl to be played in the greater LA. metro area since the Dallas Cowboys embarrassed the Buffalo Bills in the big game (doesn’t everybody?) played in Pasadena on January 31, 1993. I presume that this phrase “LA metro area” does not encompass the lovely seaport community of San Diego, which is still royally ticked off at that smug, smoggy, smelly, stupid city up north for hijacking the Chargers lock, stock and jockstraps in 2013 — particularly inasmuch as these very same Los Angeles Chargers will go up against Green Bay in today’s contest, attempting to add to San Diego’s record-tying total of zero NFL championships.


Yes, sir (and ma’am), pro football is back in LA For all those who bored the living hell out of us for years by insisting that the L.A. area neither wants nor needs the NFL, phooey on you (and the Charger you rode in on). Some of us DID want pro football all along. Some of us DO want pro football. Some of us are thrilled to have it back. Some of us don’t want our kids and grandkids to grow up in LA feeling like expats, rooting from afar for some dumb team in New Jersey or New England or New Orleans. Some of us would like to take these kids to a game once in a while, rather than bore them from here to eternity with stories of how we once went to a Rams game in our AMC Rambler in person and, boy, could that Merlin Olsen play!

How fitting that Super Bowl L is being played here, just as Super Bowl I was. Not a lot of us can honestly say we were there in person on January 15, 1967, the day Bart Starr, Ray Nitschke and the Packers enjoyed a pretty darned easy 35-10 victory over Fred (the Hammer) Williamson, Mike Garrett and the Kansas City Chiefs. I can’t, and though I later would attend around 25 of these “ultimate games,” I sure did hate to miss the only one at which the halftime entertainment was that multi-talented, world-famous, superstar of superstars, Al Hirt.

Football has changed in a big way since then. The players are larger, faster, richer. Quarterbacks now are better protected by the rules. Wide receivers now are boastful, unbearable clowns who act as if every catch they make was the greatest catch ever made. Offensive linemen now tip the scales at anywhere from 300 pounds to the approximate bulk of the entire state of Mississippi. Defensive backs cannot hit, touch, come near or breathe hard on a receiver at the risk of being called for interference. Coaches who once dressed like Vince Lombardi or Tom Landry now look as though they all get their clothes custom-tailored by Foot Locker.

I wasn’t sure the day would ever come when the nation’s most entertaining sport would return to the world’s entertainment capital and, indeed, it has not, for this is sheer fantasy football I am conjuring for you now. Farmers Field is nothing more than a sketch on a pad. No site for a Super Bowl has been chosen yet for 2016. No assurances have been made that Los Angeles will get a new team should a new stadium be built. San Diego still has its fine little squad with the lightning bolts on the helmets. For all we know, it would be Jacksonville’s team that moves here – quick quiz: name five Jaguars, and I don’t mean cars – or even Oakland’s, which used to be the most obnoxious, unpleasant, creepy people in the entire LA region before the Real Housewives of Beverly Hills.


What I don’t know is if a new stadium truly could be constructed without a penny more being taken from California taxpayers, God help us all. Or if the general public really would benefit the way Magic Johnson recently speculated it would, becoming, in effect, Jobs R Us. I guess the new stadium would need plenty of ushers, vendors, guards, parking lot attendants, scoreboard builders, time keepers, cheerleaders, mascots in funny costumes, offensive coordinators, whatever. I would be in favor of that, what with America’s unemployment closing in on what feels like 99.99999 percent?

They say (you know, “they,” we’ve all met them ) that we don’t need no stinking football here now, that we already have a beach, a zoo, a museum or two, a coast, a whole lot of shopping, a couple mountains nearby, a desert out there somewhere, a few dozen amusement parks, all that jazz. I guess we have so much entertainment to keep us occupied, those of us who follow pro football are supposed to happily conclude: “You’re right, I don’t want to go see an NFL game today. I can go to Sea World!”

I have no crystal football to tell me how Los Angeles will respond if a new stadium goes up and the NFL comes back. I personally believe it will revitalize that part of L.A. that is already well on its way to becoming a real “downtown” and not just some slum that sits in between Century City, Bel Air, Pasadena and Universal Studios. I have a vision of dozens of hotels and restaurants where there are now New York-style entertainment complexes mixed with Chicago-style architectural developments and a little of San Francisco’s artsy-fartsy cultural stuff for good measure. I see the 2032 Olympic Games coming soon to a stadium near you.

But let’s wait and see. Maybe it won’t get off the ground. Maybe this stadium thing will end up being all talk and no action, and the lack of a team in alluring L.A. will continue to be a means for the NFL to keep all other cities in line. Maybe the debt ceiling in the United States will leave this entire republic as broke as a Borders book store or the couple who once bought the Dodgers.

I sure hope this is not the case. Los Angeles does not need the NFL. Los Angeles might not get the NFL. But, dammit anyway, some of us out here DO want the NFL, so don’t keep saying we don’t.

(Mike Downey is a former columnist for the Los Angeles Times. This article was posted first at zocalopublicsquare.org) Photo courtesy of random letters. [link] -cw