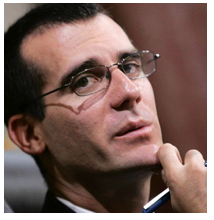 LA TRANSIT AND POLITICS - The word “politics” has Greek etymological origins that translate to “of, for, or relating to citizens”, which implies that politicians make moves that suggest they can relate to their citizens.  This also translates to Councilman and Mayoral candidate Eric Garcetti showing either misguided politics, or poor politics altogether, by denying fellow Councilman Bill Rosendahl the chairmanship of the Trade, Commerce and Tourism Committee.


For those yet unaware, Councilman Eric Garcetti (who’s also City Council President, with the authority to determine the makeup and chairs of City Council committees) is running for Mayor to succeed the termed-out Antonio Villaraigosa.  Others are rumored (if not a foregone conclusion) to be making a similar run for LA Mayor, including Jan Perry, Austin Beutner, Wendy Greuel, Zev Yaroslavsky, Lady Gaga, SpongeBob Squarepants, Jar-Jar Binks, and a whole lotta other individuals.

To put it mildly, the race is going to be tight.

So when it comes to politics (i.e., “relating to citizens”, remember?), it’s important to know wherein lies the mindset of one’s peeps before doing something that could horribly backfire.

Clearly, Councilman Garcetti doesn’t know that the Westside has Bill Rosendahl’s back—because he’s got theirs—when it comes to concerns about a balanced approach to LAX modernization and commercial/tourism development in Westchester and neighboring Westside communities.

No one can ever agree with their political leaders all the time, but it’s clear to Westsiders who elected Bill Rosendahl twice (and quite likely thrice after the next election cycle) that concerns about development and poor land use policy is on our minds.

I liked Cindy Miscikowski, but Bill Rosendahl was voted in as her replacement in part because Playa Vista overdevelopment and LAX extending its footprint into Westchester was something we wanted to fight.

It’s easy to dismiss us Westsiders as NIMBY’s, but it’s more accurate to note that Westsiders are at the forefront of LA’s efforts to promote the city’s economy, environment and quality of life.  It’s notable that then City Councilman Antonio Villaraigosa voted against certifying the politically-connected-but-omigosh-too-huge Playa Vista.

Playa Vista would likely not have been certified today, just as Las Lomas to the north was not certified, and Bundy Village was stopped cold in its tracks, because the Internet, Neighborhood Councils and a souring economy.  Our city leaders realize that overdevelopment has horrible economic, traffic and environmental consequences that motivate ordinary and otherwise apathetic citizens to come out and vote.

So when Janice Hahn left the City Council to join the ranks of Congress, Bill Rosendahl became the Acting Chair of the Trade, Commerce and Tourism Committee, why oh WHY would Council President and Mayor-Aspirant Garcetti choose to disrespect Rosendahl, elevate committee member Tom LaBonge to the chairmanship, and place himself (Garcetti) as Hahn’s replacement?

Westsiders see this committee as necessary to protect their interests, and no one but Bill Rosendahl has earned the right to be its chair.  This committee, for those that care about LAX, Westside traffic and a regional transportation system, deals with a lot of LAX-related issues, including land use issues at a time when LAX is undergoing modernization and might finally be connected to MetroRail.

Furthermore, LA World Airports is jonesing to smash north into the commercial region of Westchester despite plenty of evidence that such a job/economy-destroying move is entirely unnecessary, costly for LAX and removes resources needed to fix other parts of the City.

So when Westside Councilmember Rosendahl (whose district includes LAX) is denied the chairmanship of this committee, and is replaced and outnumbered by two Councilmen who do not represent Westside interests (and aren’t exactly known to be close to neighborhood councils and grassroots interests), I can’t ignore the alarm bells that inevitably go off when I foresee the Westside getting hosed again by special interests.

Maybe I’m overreacting, but me, I’m the suspicious type.

I’ve no clue as to what’s going on in Bill Rosendahl’s brain, but if I were the Westside Councilman who’s busted his tail for the past several years to modernize LAX, protect Westchester, get the Green Line into LAX and find a way to balance all this in a way that made economic sense, I’d be out of my head with rage.

Again—I’m the suspicious type—but was this done because Bill Rosendahl and fellow Westside Councilman Paul Koretz held the collective feet of Tim Leiwieke and AEG to the fire by demanding a financial and traffic mitigation plan for their Downtown Convention Center/football stadium that was accurate, realistic and fair?

If that’s the case, then it should be pointed out that Bill Rosendahl probably saved the proposal by AEG from being dropped by city voters (and their browbeaten City Councilmembers).

Other football stadium proposals over the decades have gone nowhere, and Angeleno taxpayers are sick of being pushed around by inside power players.  Ask the IBEW and LAUSD how they fared with the taxpayers recently, despite their expensive attempts to take a turn at the public trough through the initiative process.

Is it because Bill Rosendahl is a liberal?  Well, that would be a bit laughable in a city where the two major political orientations are liberal and very liberal.  But me, I’m one of those dinosaur conservatives who’ve noted that the chickens have come home to roost in a state where things have gotten so tilted out of control by business-destroying policies (dare I say socialist?) that even Democrats are being forced to adopt quasi-Republican policies.

And I don’t think that smashing through the commercial district of Westchester (which Rosendahl has opposed), and getting in the way of the team-building efforts to get LAX modernized and a Green Line connection to boot (which Rosendahl has spearheaded), is going to bring jobs and a revitalized economy to the City of the Angels.

And I don’t think that shackling the Westside from its duly-elected protector (Rosendahl), setting up an unnecessary runway expansion into Westchester, and destroying airport-adjacent job centers is going to make the Westside grassroots contingent too pleased.

And I don’t think that waging war on the Westside will get Eric Garcetti elected as the next Mayor of the City of Los Angeles.

(Ken Alpern is a former Boardmember of the Mar Vista Community Council (MVCC), previously co-chaired its Planning and Outreach Committees, and currently is Vice Chair of its MVCC Transportation/Infrastructure Committee. He is co-chair of the CD11 Transportation Advisory Committee and chairs the nonprofit Transit Coalition, and can be reached at Alpern@MarVista.org . The views expressed in this article are solely those of Mr. Alpern.) –cw