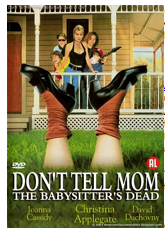 CALIFORNIA NANNY STATE - Everything in California turns into a Hollywood movie. This one is a sequel to the 1991 teen farce, “Don’t Tell Mom the Babysitter’s Dead.”


In this case, the babysitter is regulated to death.

AB 889 [link] is by Assemblyman Tom Ammiano, D-San Francisco. It would force you to follow complex state regulations every time you hired domestic help, including a babysitter. Absurdly, your babysitter would have to get a break every two hours. From what, writing on Facebook while your kids are asleep?

That would mean, if you and your spouse want to take in a dinner and movie, you’d have to hire two babysitters so one could spell the other very two hours.

Obviously, the bill isn’t intended to regulate only babysitters. But it would hit them hardest.

The bill passed the Assembly in June, backed by the usual Soviet Democrats. It’s currently in the Senate Appropriations Committee.

There’s also a good question whether “the wages, hours, and working conditions of domestic work employees” include impregnating the maid, the way ex-Gov. Arnold Schwarzenegger did with Mildred Patricia Baena. [link] No doubt the matter will have to be sorted out by the California Supreme Court.

“This is government stepping in and distorting the private sector,” Paulo Sibaja, director of legislation at the Capitol Resource Institute, told me. “This further extends government’s tentacles all over the home. It’s just intrusive altogether.”

It’s also another anti-family bill being pushed through the Legislature. I wrote yesterday about  AB 499, by Assemblywoman Toni Atkins, D-San Diego. It authorizes a government school to inject the dangerous Gardasil vaccine into children as young as 12 years old — without their parents’ consent.

Fines and Lawsuits-Back to AB 889, the Nanny State regulation of nannies.

Among its other provisions, it mandates, “A domestic work employee required to be on duty for 24 hours or more shall have a minimum of eight hours of uninterrupted sleep except in an emergency.”

So, you and your spouse take a day off to drive to the Wine Country for some needed relaxation with fermented grapes. You obviously don’t want to drive back. So you hire your faithful babysitter, a 67-year-old retired school teacher. She puts your young kids to bed early and goes to sleep herself. At 2 a.m., she wakes up because the kids are playing video games. It’s obviously not an emergency. The babysitter gives them milk and cookies. Everybody goes back to sleep and gets up at the regular time.

Because the babysitter’s didn’t get “a minimum of eight hours of uninterrupted sleep except in an emergency,” you have violated the law.

According to the bill’s wording:

“An employer shall pay $50 to the employee for each day the employer violates these provisions. This bill also provides the domestic work employee the option of enforcing a violation by bringing a civil action.  Filing an administrative or civil complaint may be done up to three years from the time of the violation.

“Additionally, a domestic work employee who prevails in a civil action shall be entitled to legal or equitable relief including liquidated (punitive) damages. Staff notes that providing for liquidated damage appears to be unique in Labor Code provisions relating to employees.”

(John Seiler blogs at calwatchdog.com where this column was first posted.) -cw