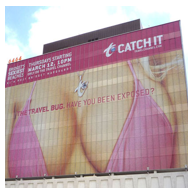 BILLBOARD WATCH - The owner of two Sunset Blvd. office buildings is asking the high court to review an appeals court opinion rejecting a claim that the city violated the owner’s constitutional rights by refusing to issue permits for 8-story high supergraphic signs on the faces of the buildings.

The case dates from 2007, when the property owner, Paramount Contractors Inc., sued to stop the city from forcing removal of the huge fabric signs adhered to the face of the buildings. According to court filings by the City Attorney’s office, the company had obtained permits to display “temporary” signs but had failed to remove them when the 120-day display period expired.

For its part, the company claimed that the city’s Community Redevelopment Agency (CRA) had offered to permanently permit the signs in exchange for a $1 million-plus payment. That offer came in a meeting with a CRA employee and City Councilman Eric Garcetti, according to court pleadings.

A federal district court judge ruled in the city’s favor in 2008, and the company appealed to the 9th Circuit Court of Appeals. That court ruled earlier this year that the company’s claims were moot because the city had approved an ordinance pushed by Garcetti to ban all new supergraphic signs in the Hollywood sign district area.

Paramount Contractors is the second plaintiff in the past three years to petition the Supreme Court in a legal dispute over the city’s enforcement of its sign laws. The court declined to review the first,  a case centered about the claim that the city’s ad-supported street furniture program violated a company’s right to put up similar advertising signs on private property.

City Attorney Carmen Trutanich has also filed a lawsuit in L.A. County Superior Court seeking damages of up to $2,500 a day from Paramount Contractors for the time unpermitted signs were displayed on the company’s buildings.

A company called Vanguard Outdoor put out marketing materials featuring Paramount Contractors’ buildings at 6565 and 6464 Sunset Blvd. Vanguard Outdoor also sued the city over unpermitted signs at different locations, and also lost an appeal of an adverse district court decision. However, the company has not filed a notice of petition to the U.S. Supreme Court in that case.

(Dennis Hathaway is the President of the Coalition to Ban Billboard Blight. He can be reached at: dennis@banbillboardblight.org) -cw