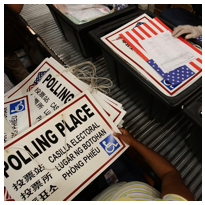 VOICES - The Los Angeles County Board of Supervisors will soon decide upon new district lines for themselves and, as a result of term limits about to take effect for four of the five supervisors, for their successors elected in the next decade.

Unlike the state legislature, which relinquished the authority to adopt its own district lines as a result of voter-enacted initiative, the Board of Supervisors continues to enjoy the right to draw its own districts.

This is the case despite the fact that a federal court 21 years ago held that the Los Angeles County Board -- only one of the current supervisors was on the Board at the time - engaged in intentional racial discrimination to limit Latino voters' influence in 1981, as well as in 1959, 1965, and 1971.

That is an unenviable record for any legislative body as it goes about once again redrawing district lines following the decennial census, a count that in 2010 once again showed significant growth in the Latino community, now accounting for 48 percent of the County population.

More telling with regard to the 1990 finding of intentional anti-Latino discrimination is that the federal court concluded that in 1981 the Board was primarily motivated by self-preservation but violated the federal Voting Rights Act by choosing to ensure reelection by limiting the rights of Latino voters.

This history suggests real peril in certain Supervisors' current course: arguing for preserving their current districts as much as possible after receiving multiple maps demonstrating that the Board can draw a second compact majority-Latino district.

In some ways, despite significant social and demographic change in LA County, it seems like 1981 all over again, with incumbent supervisors seeking to protect themselves by minimally changing district lines, knowing that doing so will restrict the ability of Latino voters to elect other candidates.

In the face of this uncomfortable similarity with 1981, the Los Angeles County redistricting debate has triggered one of this decade's first examples of what has become a decennial neoconservative ritual -- labeling the federal Voting Rights Act an outdated and needless legal relic.

Of course, like most such recycled and derivative pieces -- which appear with each redistricting cycle -- the Lehrer/Hicks piece omits critical information in attempting to portray the landmark Voting Rights Act (VRA) as a dead letter.

For example, arguing that the VRA was enacted in 1965 to address violations faced by African Americans in the South, they describe the law as "a 46-year-old statute that was written for a different era and for vastly different circumstances."

What the authors fail to mention is that the Congress has reviewed and extended critical portions of the VRA -- making changes and reviewing the law almost as though it were new legislation -- five times since its original 1965 enactment, in 1970, 1975, 1982, 1992, and 2006. That means that five Congresses and Presidents Nixon, Ford, Reagan, Bush, and Bush have all reviewed the matter and concluded that the VRA is still needed; a critical and inconvenient fact left out of the Lehrer/Hicks piece.

In addition, Lehrer and Hicks fail to mention that the 1965 Act enacted to protect African American voters in the South was expressly amended to cover Latinos as a protected class in the 1975 VRA extension. This is yet another historical fact that, if not omitted, would seriously undercut the Lehrer/Hicks thesis. The further problem is that these are just two examples of such critical omissions.

Yet, even more revealing than the errors of omission is the egregious inaccuracy at the end of the Lehrer/Hicks piece. Arguing that an unsuccessful VRA challenge to statewide redistricting ten years ago, Cano v. Davis, demonstrates the inapplicability of the VRA today, the authors seem unconcerned that, paralleling their proffered criticism of the VRA itself, they are applying a ten-year-old decision written for a different era and for vastly different circumstances.

But their false attribution of a ten-year-old LA Times opinion piece on the Cano case is what is so revelatory.

In what is plainly intended as a "gotcha" argument, they assert that Supervisor Gloria Molina -- who currently supports the creation of the second Latino supervisorial district to guard against a VRA suit -- wrote a 2001 Times op-ed critical of the VRA and of the Cano case.

On the surface, it is difficult to see how anyone politically knowledgeable could confuse the two. Molina has for two decades held one of the most prominent and influential elected local positions in the nation, much less the region.

And Romero was not just a state senator; she served in the body's leadership and was a prominent candidate for statewide office in last year's primary election. Yet, there it is. A "gotcha" moment that turns on an egregious conflation of two different elected officials.

Now, perhaps Lehrer and Hicks (as well as the Daily News editors who ran the piece) are just generally careless about fact-gathering and fact-checking. If so, they might certainly (and perhaps regularly) confuse elected officials of any race who share the same first name.

Or, just perhaps, no matter how much Lehrer and Hicks may wish for a colorblind Los Angeles where unconscious bias no longer afflicts people, their own error was influenced by the fact that Molina and Romero are two among a small (but encouragingly growing) cadre of prominent Latina elected officials in California.

If that is the case -- and of course, there is no way of knowing for sure, that being the nature of unconscious bias -- then Lehrer and Hicks inadvertently demonstrate precisely why the VRA is still needed and why, in its wisdom, the Congress in 1982 eschewed a requirement of intentional bias to prove a violation under the Act in favor of a test that relies on multiple indications of behavior that has the effect of restricting minority voting rights.

It is those very often-unintentional effects that require the second Latino district that the Board of Supervisors is on the verge of rejecting -- at great risk of successful litigation.
(Thomas A. Saenz is the President and General Counsel of MALDEF. This article was posted first at huffingtonpost.com)  -cw