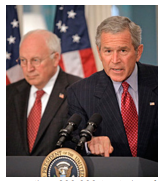 RETROSPECTIVE - The September 11, 2001, terror attacks by Al Qaeda were meant to harm the United States, and they did, but in ways that Osama bin Laden probably never imagined. President George W. Bush’s response to the attacks compromised America’s basic principles, undermined its economy, and weakened its security.

The attack on Afghanistan that followed the 9/11 attacks was understandable, but the subsequent invasion of Iraq was entirely unconnected to Al Qaeda – as much as Bush tried to establish a link. That war of choice quickly became very expensive – orders of magnitude beyond the $60 billion claimed at the beginning – as colossal incompetence met dishonest misrepresentation.

Indeed, when Linda Bilmes and I calculated America’s war costs three years ago, the conservative tally was $3-5 trillion. Since then, the costs have mounted further. With almost 50% of returning troops eligible to receive some level of disability payment, and more than 600,000 treated so far in veterans’ medical facilities, we now estimate that future disability payments and health-care costs will total $600-900 billion. But the social costs, reflected in veteran suicides (which have topped 18 per day in recent years) and family breakups, are incalculable.

Even if Bush could be forgiven for taking America, and much of the rest of the world, to war on false pretenses, and for misrepresenting the cost of the venture, there is no excuse for how he chose to finance it. His was the first war in history paid for entirely on credit. As America went into battle, with deficits already soaring from his 2001 tax cut, Bush decided to plunge ahead with yet another round of tax “relief” for the wealthy.  (The rest of Joseph Stiglitz’ 9/11 Retrospective here.)