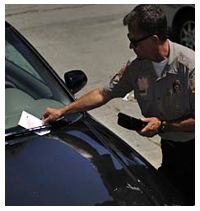 RETHINKING LA - LA’s City Attorney, Carmen Trutanich, is a solution in search of a problem and his heavy-handed response to LA’s “apron parking” drama demonstrates that it is “Nuch” that needs to be curbed, not the Angelenos who park their cars in their driveways between the street and the sidewalk.

For as long as there has been a shortage of parking, Angelenos in densely populated neighborhoods such as those around UCLA have parked in their driveways, between the curb and the sidewalk or between the sidewalk and the building. As the number of vehicles increased, some residents started parking on the sidewalks. Eventually the fine line between parking on the apron and blocking the sidewalk got blurred and now that the City Attorney has entered the fray, he has come down on the wrong side of the line.

This practice of blocking the sidewalk with a parked vehicle is prohibited in the California Vehicle Code in a section that clearly articulates the violation: CVC 22500 No person shall stop, park, or leave standing any vehicle whether attended or unattended...(f) On any portion of a sidewalk, or with the body of the vehicle extending over any portion of a sidewalk...

Unfortunately, the LADOT has had more important issues to address and their failure to enforce simple “blocked sidewalk” violations has resulted in a pedestrian hostile environment in some communities, one that is literally unbreachable to those with limited mobility. It has also resulted in a legal action against the City of LA that invokes the Americans with Disabilities Act (ADA) which holds municipal authorities responsible for maintaining ADA compliant infrastructure in the public right of way.

The City Attorney, on the receiving end of the ADA legal action, jumped in feet first and started giving legal advice and operational direction to the LADOT, resulting in a strange sequence of actions that raises a few questions and fails to effectively address the blocked sidewalks of Los Angeles.

1) Does the City Attorney give legal advice to the City’s many Departments or does he actually direct them?

The recent actions of the LADOT does not seem to reflect a General Manager acting on the advice of the City Attorney but a Department that gets its marching orders from the City Attorney. When did this shift in authority take place?

Not even the City Council “directs” the LADOT on operations, instead relying on recommendations and requests for reports, reviews, studies, and other “nudges” that typically consume energy and staffing but fail to direct the General Managers who answer to the Mayor.

In fact the City Council attempted to address the “apron parking” issue in 2007 but their calls for LADOT enforcement of blocked sidewalks were ignored.

2) Does the City Attorney look for the most difficult route to a solution or did he just miss the obvious?

The opportunity to enforce CVC 22500 (f) would directly address the concerns of the ADA advocates who are focused on blocked sidewalks but instead, the City Attorney went off on a legal goose chase that invokes the nebulous “apron parking ban” and then rests on shaky legal ground.

Current citations are written as violations of LA’s Municipal Code 80.53 which says: “No person shall stop, stand or park a vehicle within any parkway.” Why start a debate over the definition of “Parkway” when it’s not the issue. The issue is blocked sidewalks.

The City of LA defines “parkway” [LINK] as “that portion of a street other than a roadway or a sidewalk” and goes on to clarify that the term "parkway" [LINK] is defined as the area of the street between the back of curb and the sidewalk that is typically planted or landscaped.

3) If the LADOT’s recent enthusiasm for enforcing the City Attorney’s interpretation of LA’s “apron parking” ban is meant to demonstrate equal application of the law, why did the LADOT wait until the end of UCLA’s school year [LINK] to begin enforcement?

The LADOT’s selective enforcement of the City Attorney’s directive missed the issue of parking congestion and blocked sidewalks in Westwood. Instead it resulted in a July 25th citation for a couple who reside miles from UCLA in a neighborhood they have lived in for decades. 20 years ago they approached the City of LA’s Department of Transportation, receiving permission from “Robert Moran” to park parallel to their double-wide driveway, “as long as the vehicle wasn’t on the curb, sidewalk, or the planted parkway area.”

Then, without so much as a warning or a heads up, the mid-city residents were cited for parking parallel to the curbline, in front of their own driveway, in the same place they have parked their car for decades.

The irony to the LADOT’s misguided use of LAMC 80.53 is that is fails to address the vehicles that are pulled forward toward the building but fail to clear the sidewalk. The sidewalk remains blocked and the LADOT misses an opportunity to actually be effective.

4) If the City Council has a track record demonstrating past and present attempts to resolve the “apron parking” dilemma by clarifying LA’s Municipal Code, why doesn’t the City Attorney partner with the City Council in separating the issues?

As long ago as 1975, [link] LA’s City Council has attempted to resolve the issue with an ordinance that would specifically permit the parking of motor vehicles “between the street and the sidewalk, in those cases where the vehicles does not protrude either into the street or fully or partially block the sidewalk.” The motion died on the vine for lack of interest.

Several years ago, [link] LA’s City Council again took up the issue, this time in reaction to a campaign initiated by Michael Dukakis who was a visiting UCLA professor in the Department of Public Policy for the School of Public Affairs.

The pressure to clear the sidewalks by enforcing the “Apron Parking” ban was met with equal pressure to maximize parking inventory by maintaining the status quo. Again, any legislative or enforcement activity simply faded as people moved on.

Last month, [link] in response to complaints from the residents who were on the citation end of a flurry of LADOT parking enforcement activity, the City Council again took up the issue, this time advancing a “recommendation” that would “INSTRUCT and REQUEST, as appropriate, the Los Angeles Department of Transportation and the City Attorney to report back on:

b. potential creation of a program to deal with parking in driveways in a way that is
compliant with the Americans with Disabilities Act (ADA).

c. a program to allow apron parking that is ADA compliant.

d. meeting with plaintiffs and creating a program in cooperation with the plaintiffs.

Missing from this brouhaha is the simple strategy of sending the LADOT off to enforce the state prohibition against blocking a sidewalk and allowing the “apron” or “parkway” debate to fade into oblivion where it belongs.

5) If the City Attorney was serious about the pending ADA legal action that is the direct result of blocked or inaccessible sidewalks, why is he silent on the issue of LA’s broken sidewalks?

Why is the City Attorney addressing the City of LA’s ADA issues by instructing the LADOT to go after the residents while avoiding the larger issue of LA’s responsibility to maintain its sidewalks in good repair?

By the way, the City of Los Angeles defines “apron” [link]   as that portion of a driveway approach, exclusive of side slopes or driveway curb returns, extending from the gutter flow line to the property line.

Perhaps it’s time for the City Attorney to do the homework and to rely on the specific bans that actually exist, such as blocking the sidewalk, blocking a driveway without permission, and blocking the street.

The debate over street parking and the use of public space is a worthy topic, one that will never get addressed as long as the City Attorney and the LADOT act in concert to cloud the waters and avoid the real issue, which is the blocked sidewalks in LA that are in violation of ADA requirements.

It is important that the City Attorney focus on the ADA issue at hand and that he act to bring the full spectrum of sidewalk access into compliance by focusing on the sidewalks, [link] not the aprons. His current action is simply an engineered conflict that diverts the discussion from the issue, “ensuring that pedestrian rights of way are kept free of temporary or permanent obstructions.”

(Stephen Box is a grassroots advocate and writes for CityWatch. He can be reached at:             Stephen@thirdeyecreative.net .) –cw