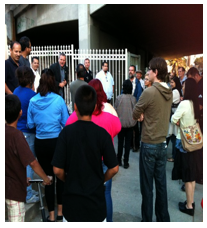 RETHINKING LA - Thursday evenings in East Hollywood are for walking and all summer long, residents from throughout the community have gathered at a different neighborhood each week to walk, to make new friends, to partner on public safety, and to share stories of the past and hopes for the future.

The East Hollywood Street Beat was born out of frustration. Local homeowners had responded to the recent crime wave in the community by building over-in-height fences to protect their families and their homes.

This last ditch effort to combat crime didn’t prompt the City Attorney to partner with the LAPD in the enforcement of Gang Injunctions or in Abatement Actions. Instead, it drew the wrath of LA’s Department of Building & Safety which went after 177 homeowners, citing them for code violations that generate revenue but fail to address public safety.

The City Attorney partnered with Building & Safety in levying fines, fees, penalties and variances that cost $350, $550, $1925, and $4800, all so that a homeowner can keep the fence they built to protect their home and family. This City Attorney action came with threats of “lien, garnishment, and other legal actions.”

It was against this backdrop of bureaucratic selective enforcement and misguided priorities that yet another attempted robbery took place. The family who called the police received a lecture from responding LAPD patrol officers on crime prevention measures that included securing person and property against criminal attack.

The demonstrated disconnect between the LAPD’s advice and the City Attorney’s actions sent a clear message to the residents of this low-income and high-crime community that public safety was a Do-It-Yourself project.

It was on that night, just as the LAPD patrol departed and the long warm summer nights arrived, that the East Hollywood Street Beat was born, a simple movement to encourage local residents to walk the streets, often and everywhere.

The following week, as the Street Beat gathered in the first of the 11 different East Hollywood neighborhoods, the LAPD arrived in a patrol car with the ominous advice, “This is a tough neighborhood. Be careful!”

The LAPD officers were invited join the Street Beat but they rejected the invitation, explaining, “We need our tactical gear and we're not at liberty to leave our vehicle.”

East Hollywood is a border town, one that rests between the LAPD’s West and Central Bureaus, resulting in oversight from three different LAPD divisions - Northeast, Rampart and Hollywood. A crime at the intersection of Santa Monica Boulevard & Normandie Avenue can involve all three divisions, creating a bureaucratic maze that is difficult to navigate.

It took some coaxing from the community, and some support from Chief Beck, Assistant Chief Paysinger, Deputy Chief Perez, and Commander Villegas, but it wasn’t long before the Street Beats had the full support and participation of the LAPD.

In a neighborhood that is filled with traffic that moves at blistering speeds, the opportunity to slow down life to a walking pace gave locals a unique opportunity to share their concerns with the LAPD. On one evening, the LAPD dropped from the walk twice, first as the Street Beat walked through a domestic violence scene and second when it walked through an illegal drug sale.

This was a clear demonstration of the underlying issue that prompted the over-in-height fences in the first place. If locals can’t walk their neighborhood without walking through criminal activity, they insulate their families, they isolate their children, and they do what’s best to protect their homes.

As the Street Beat headed north on a residential street a few weeks ago, it passed an apartment building that had been the subject of “man running with gun, gang activity, drug sales, and prostitution” reports, all in the day prior to the walk. While the LAPD expressed frustration that they were limited in their enforcement authority, the City Attorney was unable to offer Abatement Action support because of “budget cuts.”

It was the contrast of the City Attorney’s laissez-faire attitude to the transactions between criminals in a REAP property occupied by squatters against the City Attorney’s actions against homeowners who act to protect themselves by building fences that struck the Street Beat participants as an example of a City upside down in priorities.

Along the way, the East Hollywood Street Beat transitioned from a “take back the streets” public safety initiative into an “embrace the legacy” community pride initiative.

LANI and studioneleven, the folks behind the Virgil Village Traffic Calming project, joined the Street Beat to share the community’s vision for turning Virgil Village into a more walkable street with great public space and parklets that encourage people and supported the local economy.

The legacy of Route 66 was a reoccurring theme on the walks and different community leaders took turns in sharing their connection to “America’s Main Street.” From the old Jay's Burgers to the last library built by Carnegie, from the old Campus Theatre to the Hollywood Star Lanes where the Big Lebowski was shot, Route 66 was always full of surprises.

The Street Beat visited the Melrose Church (est 1905), Immaculate Heart of Mary (est 1912), Kairos and the Russian Orthodox Church, enjoying a bit of history, a bit of perspective, and great company from new friends who joined the walks.

To suggest that going for a walk is a virtuous activity is not new. Einstein said that going for a walk was key to problem solving. Native Americans contend that walking in the shoes of another is the key to understanding. Nietzsche claimed that all truly great thoughts are conceived by walking.

The East Hollywood Street Beat is joined by other great community walks.

The Big Parade is a two-day walk through Los Angeles that starts at Angel’s Flight and ends at the Hollywood Sign. Led by Dan Koeppel, also famous for his tours of LA’s hidden stairs, the Big Parade is equal parts community building, athletic endeavor, and history lesson.

The Great LA Walk is an annual event that starts at One Wilshire and follows Wilshire Avenue west for 16 miles, until it simply runs out of land. Led by “Mike and Maria” of Franklin Avenue, this urban safari is “part discovery, part gawking tour and part epic celebration of LA’s grand boulevard.

Each year 66 Productions leads a series of walks that cover the western 66 miles of Route 66 in walks that average 6 miles each. The Route 66 tours focus on the history of “The Mother Road” and they come right down Sunset to Santa Monica Boulevard where they turn west and walk right through East Hollywood where they may end up joining the Street Beat.

The East Hollywood Street Beat continues to walk on Thursday nights, this week in Kingsley Vista with friends from the LAPD’s Hollywood Division.

(Stephen Box is a grassroots advocate and writes for CityWatch. He can be reached at:            Stephen@thirdeyecreative.net .) –cw