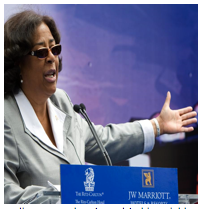 RETHINKING LA - LA City Councilwoman Jan Perry is a seasoned veteran of City Hall, having served as a deputy to Councilman Mike Woo and as Chief of Staff to Councilwoman Rita Walters, and she has a reputation for solving problems and getting things done. As she revs up the engine on her Mayoral campaign, her greatest obstacle is defining herself as a candidate with a citywide vision.

In many ways, Perry brings to life the axiom “A strength exaggerated becomes a weakness.”

As her mayoral campaign warms up, Perry recently stopped by the East Hollywood Neighborhood Council to talk about her resume, speaking quickly from notes that detailed her exploits downtown.

Missing from her presentation was any reference to the fact that she used to work in East Hollywood as a CD13 staffer and that she knew the issues. An audience member turned to his neighbors and said out loud “Who is this lady?”

On the one hand she is credited with a direct approach to communication that is open and forceful.

On the other hand, she is criticized because her direct approach to communication can be abrupt and impersonal. Two sides of the coin.

Perry cut her City Hall teeth as a planning and land use handler, one who demonstrated a knack for shepherding projects through the byzantine process of funding, development, and implementation. She gets high marks for “handling some very complicated cases” said Woo.

On the one hand she is credited with having strong relationships with the business interests responsible for much of downtown’s transformation that includes adaptive reuse, a commitment to the arts, and supporting quotidian retail that satisfies the residential needs.

On the other hand she is criticized for erring in favor of the developers and investors at the expense of a larger and longer term vision for downtown.

Downtown residents, business operators, and community advocates speak highly of Perry, pointing at her commitment to a “24/7” downtown, one that is active and alive around the clock.

Perry’s staff get high marks for access and responsiveness, demonstrating an enviable track record with constituent services. Says one downtown resident “I'm not particularly politically savvy, nor am I really that interested to be honest, but I would say from my experience I find her to be refreshing and progressive - one of the good ones. She "gets" it. Really action and results oriented, not just lip service.”

On the one hand downtowners are pleased that they can count on the Perry and the CD9 office for support with local events, community groups, specific land use issues, code enforcement, film location issues and other quality of life issues.

On the other hand, critics call this the sign of a broken city, claiming that it shouldn’t take City Council intervention to get the trash picked up.

Downtown’s Pershing Square was once dismissed by detractors as a “daycare for the homeless” facility and its 145 year history includes lots of ups and downs. If it wasn’t for the lucrative parking facility underneath, Pershing Square would probably have transitioned into a Forever 21 warehouse by now if not for the die-hard vision of the community and the support of Councilwoman Jan Perry.

On the one hand Perry is credited for embracing the belief that  “Art and Culture can save the world!” and that vision is evident in the current programming at Pershing Square which includes a world class concert series, movie nights, holiday ice skating, bike tours, and the activities one expects from a Great City.

On the other hand, Perry gets called out for solving the immediate problem but missing the larger crisis, a lack of leadership in community planning. [link]

Council President Pro Tempore Perry took a hard line on public health with her proposed moratorium on fast food restaurants [article] in poor neighborhoods, a move that Slate Magazine referred to as “Food Apartheid.”  Perry’s commitment to fighting obesity and heart disease drew accolades for bravery but mockery for its impact on the marketplace and free choice.

On the one hand Perry is one of the only Councilmembers to take a hard stand on public health and its relationship to food choices and access to healthy and fresh produce.

On the other hand, Perry must reconcile her handling of the former South Central Farm,  a 14 acre community garden that was bulldozed in a day, displacing the food source of 350 farmers, their families, and the thousands who benefited from the garden over its 15 year life.

Scott Hamilton Kennedy’s Academy nominated documentary “The Garden” tells the chilling story of the South Central Farm and Jan Perry’s role in balancing the interests of the property owner, the city, the developers, the community, and the farmers. In the film, a City Hall insider addresses the farmers and explains Perry’s failure to support the farmers, saying candidly, “You don’t matter because you’re not voters.”

Perry is no stranger to the City Hall tug-of-war that takes place between the many parties who work the system with a life-long commitment that transcends term limits and trumps philosophical differences with campaign contributions.

Perry’s track record with the ill-conceived Measure B movement demonstrated a skill for lining up the power elite and mowing over the public process as if it were the right thing to do. Once Measure R had been soundly defeated in referendum, Perry shifted slightly and has now taken a public role in holding the DWP accountable for rate hikes, budget excesses, and the implementation of an Office of Public Accountability.

On the one hand Perry is given credit for embracing environmental issues such as solar, water reclamation, and green building standards. This is complemented by her support for a Ratepayers Advocate.

On the other hand, if Perry were any good at wielding her bully pulpit to move LA forward on green issues and accountability, there would be a track record for success to show for it. No green roofs? No ratepayers advocate? No kudos!

Jan Perry is credited with taking a hard line stand against the machinations of one of LA’s toughest power-brokers, the IBEW’s Brian D’Arcy, earning her credit for fighting the good fight in support of open and transparent governance. On the one hand, this action was more than symbolic, it was a lonely battle with costly ramifications due to the IBEW’s war chest and ability to punish candidates who cross D’Arcy. Perry earned the respect of many.

On the other hand, as Perry led the charge for downtown’s Farmer’s Field, Rosendahl’s request that the Ad Hoc Committee on the Proposed Downtown Stadium and Event Center conduct its meetings according to Brown Act rules (public participation, notification, etc) prompted Perry to protest publicly in City Council chambers. Even fans were taken aback as she pointed at Councilman Rosendahl and feigned umbrage as she rejected his claim that the public had a right to witness the activities of the Farmer’s Field Ad Hoc Committee.

Ultimately, Jan Perry is a collection of strengths, some so extreme they have the capacity to bring her down as she moves to position herself from provincial ruler to citywide leader.

Her greatest obstacle is one of balance, can she find the sweet spot between pugnacious street fighter and charismatic visionary? Can she find the middle ground between facilitating the best interests of developers and protecting the positions of LA residents?

Most importantly, can Jan Perry go big, can she move beyond a “What’s good for downtown is good for LA!” meme and demonstrate that she has a vision for Los Angeles as a whole, from the harbor to the Westside, from the far reaches of the valley to the eastside of LA.

(Stephen Box is a grassroots advocate and writes for CityWatch. He can be reached at:           Stephen@thirdeyecreative.net .) –cw