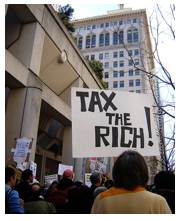 GUEST WORDS - Who gets to tax the rich first - the federal government or the California state government? Politicians and tax increase advocates on both the federal and state level say the rich must pay more. In the end, neither may pass a tax on high-end income taxpayers and there is no advocacy to raise taxes here. However, how successful the federal government tax-the-rich supporters are on this issue will clearly affect the fortunes of the state.

President Barack Obama says the United States must attack its deficit problem in a "balanced" way, which includes both cuts and revenue increases. He talks about taxing millionaires and billionaires but sets that bar rather low, often citing the figure of $250,000 in income as a target for tax increases.
California tax increase advocates think the rich start at a higher point, if not quite millionaire territory. Assembly Member Nancy Skinner's income tax increase proposal, AB 1130, would levy an additional 1% tax on taxable income of $500,000 and more.

The CFT thinks California should get some of the revenue those income taxpayers didn't pay to the federal government because of the Bush tax cuts. The union supports an initiative in 2012 since the Skinner bill is unlikely to advance.

Credible sources confirm that discussions surrounding the initiative are considering an income tax increase of greater than 1%, arguing because of the Bush tax cuts, rich California taxpayers could afford up to a 4% increase.

But, President Obama and some of his allies are counting on the Bush tax cuts to expire at the end of 2012. If that occurs the federal government would soak up the revenue, not California.
Proponents of the state initiative want to have a tax-the-rich measure on the November 2012 ballot. Even the rich might find sympathy from voters if they are staring at a double whammy of both federal and state income tax increases. (For now, we won't even go to the Steinberg bill, which could create a local income tax.)

The different governments face dissimilar challenges to pass an income tax increase. In California, an initiative qualified for the ballot must receive approval of a majority of the voters. A federal income tax rate increase must receive support in Congress and must dodge both filibusters and Tea Party supporters who have opposed taxes so far.

While the national route may seem formidable, there are elements of the Tea Party that are no fans of Wall Street and might be persuaded to join the tax-the-rich chorus if -- a big if -- additional spending cuts and reforms are deep and real. The Obama Administration is undercutting that possibility by labeling the S&P U.S. credit downgrade as a "Tea Party downgrade."

This analysis of racing to tax the rich doesn't consider the arguments that it would be unwise to do so -- but I can't help myself as I look at California. State Treasurer, Bill Lockyer, said state income taxes on the rich are high enough already. "The risk is they (the rich) may decide to live and work out of one of their other houses (if taxes are raised here). And then very quickly we lose a substantial source of income. So I am worried. I think we're very near the tax ceiling on the personal income tax side."


California's budget history the last few decades has shown that relying on the rich as a mainstay for taxes usually means a wild roller-coaster ride for the state budget. That top 1% of income taxpayers that the teachers' union wants to hit with a greater tax rate provides 50% of the income tax revenue to the state. When the economy hits a ditch, their income drops, and the taxes to the state plunge causing budget headaches. Future downturns would only be worse for the state budget if the state relied even more heavily on this category of taxpayers.

Of course, some raise-the-taxes advocates believe the rich can absorb tax increases on both the state and federal level. But, politically, if the Feds get there first, it may be tougher to sell to California voters who would have the final say on any ballot measure.

(Joel Fox is the President of the Small Business Action Committee and the editor of Fox & Hounds  [foxandhoundsdaily.com]] where this column was first posted.) –cw