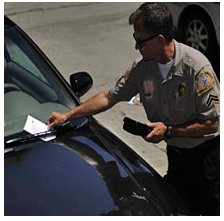 ALPERN AT LARGE - It's nice to know that the City of Los Angeles, with its long history of falling short on consistent policy and meeting deadlines, is dependable on at least one thing.  What a bummer, though, that that one thing is its tendency to sneak through important policies and actions in the middle of the summer when grassroots community leaders are away with their families.

And this summer has proven no exception, as can be illustrated by the sudden uptick of ticket-writing to law-abiding and taxpaying homeowners who were parking on the apron of their driveways (between the sidewalk and the street)  in the same fashion they'd done for years (even decades) without any problems to motorists, pedestrians or any emergency vehicles.  Not a complaint from anyone ... but suddenly there's a flurry of tickets and now the homeowners have little to no options as to where they can park their cars.

Pretty much everyone smells a cheap, tawdry way to increase revenue on the part of cash-starved City workers, but nailing honest homeowners who've behaved no differently than they have for years is just one more way to infuriate taxpayers for whom this City relies to make its ends meet.

It's gratifying to see City Transportation Committee Chair Bill Rosendahl take this issue into consideration, and it's hoped that this little "summer surprise" will be dealt with by a Council-led initiative to suspend its policy and enforcement of banning apron parking until such a time that the policy is reviewed and altered to take both the needs (and rights) of the homeowners as well as that of pedestrians and motorists who need unfettered access to our roads and sidewalks.

Seriously, though ... this was not a problem, and the timing during the middle of summer is as annoying as it is predictable.

Similarly, the summer timing is as annoying as it is predictable when it comes to the sudden and unexpected contract bidding war that is being done by bus bench companies who are far more focused on the needs of advertisers than the needs of bus riders, or of the needs of the community who wish to prevent urban blight from ugly bus benches and even uglier bus bench advertisements.  This issue is rapidly on its way to the Council, and it's being done while we're all on vacation and/or otherwise focused on our families and personal lives.

Do neighborhood councils, bus riders or transportation advocates have a role in this process, or in the design of these bus benches, or in any policy implemented to keep advertisements appropriate and not blighting?

Of course not, because that would mean that the needs of a given community to provide first-rate and beautiful bus benches and shelters for its transit riders would have to be taken seriously.  That would also mean addressing the MONEY issue (and isn't it all about the MONEY?) with respect to which council districts get the signs and which council districts get the revenue from the advertisements.

The last big street furniture contract with CBS/Decaux/Viacom was LA at its worst, with signs concentrated mainly on the Westside but the revenue shared equally by every District in the City.  When neighborhood councils (such as my own Mar Vista Community Council) asked for bus shelters instead of kiosks and signs, we were informed that ultimately this was a signage project, not a street furniture project.

As we now see again, with the short-term financial needs of the City eclipsing the long-term financial impacts of uglifying the City by sharply reducing the quality of life for residents and businesses with ugly bus benches and even uglier bus bench advertising.  With neighborhood council and transportation advocate input, we can turn the mad, hellbent rush of the City to pass some sort of bus bench contract into a revenue creator that also addresses the deplorable condition of our busrider amenities (which ensure that only poor, desperate and/or committed individuals will ever leave their cars to ride a bus or take public transit).

And for those of you who don't believe it makes a difference, take a look at cities with beautiful bus shelters that enhance the hospitable nature of a busrider-friendly transit system.  Even with signage, it does make a difference.

And speaking of making a difference, maybe the City can "cool its jets" and not ram through policies or contracts without the legally-mandated and morally-imperative transparency that comes with quality inclusion of grassroots leaders and neighborhood councils.

It may be a hot summer, but the City need not make things hotter by sneaking and ramming through policies that it knows will alienate and infuriate its residents and taxpayers--especially with an Internet that can do everything from creating an Arab Spring in the Middle East to linking and empowering neighborhood activists to keep abreast of even the most secretive and obnoxious power plays of City officials and electeds.

After all, how do you think I was able to remain up to date on these local City issues even though I'm on vacation (and from where I write this) in Coeur d'Alene, Idaho?

(Ken Alpern is a former Boardmember of the Mar Vista Community Council (MVCC), previously co-chaired its Planning and Outreach Committees, and currently is Vice Chair of its MVCC Transportation/Infrastructure Committee.  He is co-chair of the CD11 Transportation Advisory Committee and chairs the nonprofit Transit Coalition, and can be reached at [email protected] .    The views expressed in this article are solely those of Mr. Alpern.) –cw