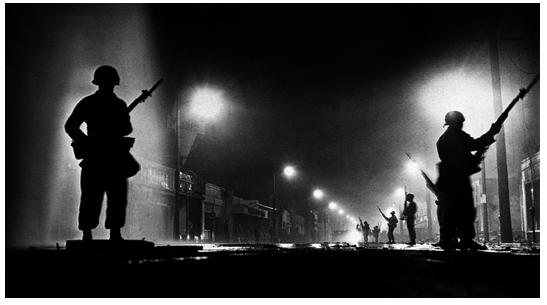 CAN ANGER TURN TO RIOTS AGAIN? - It’s hard to believe that it’s been 46 years since August 11, 1965, the day the Watts uprising began.

I’ll never forget the fear that I felt watching the chaos unfold. I was shocked but not surprised: you could feel the anger and frustration building up during that hot summer. The booming California economy was providing little opportunity for people of color.

Public policy was benefiting the already fortunate and was leaving behind those who were already disadvantaged. In California, as in the rest of the country, African American and Latino families were reaching a boiling point that could not be contained any longer.

Over the following two years there were a number of additional riots in Chicago, Newark, Detroit and elsewhere.

Today in Watts, and across California, people are feeling that familiar angry bubbling stirring up as the gap between rich and poor grows ever wider. During this time it is important that we recall the lessons from that turbulent period in our nation's past.

Two years after the riots broke out, President Lyndon Johnson established The Kerner Commission to try to understand what happened and what could be done to prevent further occurrences.

The resulting document, known as the Kerner Report, recommended that people from all walks of life have more equal access in four major areas: jobs, education, housing and services. Unfortunately, the inequality of 46 years ago is all too familiar today.

To be sure, there have been areas of progress. The Community Reinvestment Act of 1977 outlawed discriminatory banking practices and redlining. This helped give millions of minority families like mine the opportunity to fulfill the American Dream through homeownership.

I knew something was wrong a decade ago when my mailbox began to get filled on a daily basis with offers that seemed too good to be true. The pamphlets were from realtors, brokers and lenders that were selling predatory loans.

These subprime loans were designed to be more expensive products for high risk borrowers, but turned out to be a chance for loan sharks to make a buck by pushing them on my elderly and minority neighbors, whether they needed them or not.

Wall Street securitized these loans and packaged them as good investments until the market's inevitable collapse.

According to a recent report, Homewreckers, the loss to homeowners, the property tax base, and local governments amounts to at least $650 billion.

Many of us feel as frustrated today as we did in 1965. Yet, as was the case 46 years ago, there is an opportunity for elected officials and Wall Street to address the problems. Key among them is the growing number of mortgage holders who now owe more than their houses are worth. Today, 23% of homeowners are underwater, including as many as 35% of African American homeowners and 41% of Hispanic homeowners.

It is a problem we can solve if we have the will to do so. We can actually fix the foreclosure crisis in California by writing down all underwater mortgages (2.1 million in the state) to market value. This would pump an annual $19.9 billion into the state economy and create 295,000 new jobs annually for 30 years. It would save Californians an average of $790 a month on mortgage payments and would dramatically reverse the loss of wealth in minority communities.

I still believe in the American Dream. That’s why Bank CEOs and elected officials owe a solution to devastated black and Latino families in Watts and everywhere who believe we all deserve a fair chance to pursue our dreams.

(Lyneva Mottley grew up in Watts, and has lived there for over 50 years. A homeowner, she is retired from a career in factory work and home health care. She is the acting chair of the Watts chapter of the Alliance of Californians for Community Empowerment (ACCE). For more information about ACCE, visit www.calorganize.org.  This article was posted first at beyondchron.com) -cw