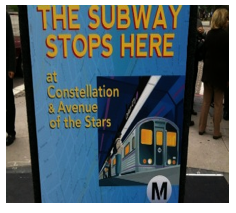 TRANSPO LA - Last week, just after a large deer decided to make itself a hood ornament on our car, I got to thinking about what a great country this is.

In spite of our political and social divisions and the still phlegmatic economic recovery, this special land is full of beauty and ingenuity and upbeat hardworking citizens willing to pitch in and build their community, raise a barn or tend to two strangers nearly killed in a run in with the local wildlife.

And then there is that pesky sky-is-falling handful of opponents of a Century City subway station at Constellation Blvd and Avenue of the Stars. What side of the bed do they get up on? But more on that in a minute.

About the accident, we were lucky and came away unscathed; while the car and deer, not so much. Totaled, our beloved carriage now rests in peace at Ron's Towing in Scottsbluff, Nebraska, while the accident propelled the buck in velvet we collided with skyward to the heavens.

Suddenly stuck without wheels in the beautiful northwestern corner of Nebraska, we found that the people of Scottsbluff could not have been warmer, more upbeat and helpful. Thanks to them, by the next morning, we were back on track heading west in an affordable rental car.

Do you think any of the Nebraskans we met would be complaining if a county agency announced plans to spend billions of dollars hiring local people to extend a much-needed rail line through their community? Not a chance.

By contrast, the vocal Beverly Hills opponents of a station at Constellation Blvd remain perpetually full of bile about the right station for the right location. Unable to look beyond their noses, these Pinocchios can't talk about Constellation and Metro without foaming at the mouth and revealing themselves to be the chronically grumpy and visionless Babbitts that they are.

Instead of joining with local civic leaders and ordinary citizens working for a better and more mobile LA, the leaders of the No on Constellation campaign appear hell-bent on sticking it to the regional transportation agency and the tens of thousands of Angelenos who will be better served by a station at the center of the center in Century City.

I will never forget the generosity and thoughtfulness of those I met in Scottsbluff and out on that country road just south of Crawford, Nebraska, where car and deer met their untimely deaths. Which is why I find it so hard to reconcile that Midwestern caring, selflessness and can-do American spirit with the damage being done to our community by a few dour Beverly Hills School Board and City Council members.

With their grumpy and mean-spirited proclamations about the havoc a subway tunnel dozens of feet underground will cause, these folks are out to stop the train from coming through no matter how good it is for LA. Like the luddites who stopped the subway from coming to Fairfax and beyond years ago, they whine and shout and do their best imitations of the boy who cried wolf.

It is a big, beautiful and optimistic country. What makes the members of the School Board, presumably people who this country has also been very good to, so shameless in their arguing against a station where it should be located?

If only the Beverly Hills School Board and Council Members could put aside their contempt for progress and disdain for the people of Los Angeles, what a better place LA could be. Then they too might join in the spirit and common mission that makes America great.

Still I am not bitter or discouraged and I hold out hope that things will change. And do I believe the No on Constellation camp can put aside its threats of a lawsuit and tiresome PR and lobbying campaign to derail the station where it belongs? You betcha!

(Joel Epstein is a communications and public affairs consultant focused on transportation, development and other urban issues and a CityWatch contributor.) –cw