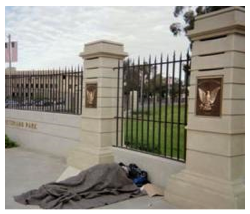 
According to her statement, Feinstein, a member of the Senate Appropriations Committee, included an amendment to the Fiscal Year (FY) 2012 Military Construction, Veterans Affairs (VA) and Related Agencies Appropriations bill. The bill would authorize the VA to renovate one building- Building 209.

In 2004, Santa Monica Councilman Bobby Shriver proposed that buildings 205, 208 and 209 on the WLAVA property be used for permanent housing but it was not until 2007 that the buildings were designated as such.

In 2008, the first hint of a project came when Ralph Tillman, Director Asset Management at the WLAVA announced renovations to Building 209 would cost $7,211,090.00 and would house approximately 80 veterans.

As a part of a five-year plan to end veteran homelessness Shinseki, along with President Obama, in November 2009, allocated $3.2 Billion for FY 2010 of which $20M was supposedly earmarked for the renovation of building 209William Daniels, Chief of Mental Health for the Greater Los Angeles Healthcare System (GLAHS) confirmed this (August 2010- Strawberry Gazette).

But on November 12, 2010, just months after that meeting, Feinstein issued a press release seeking “$35.5 Million for Long Term Therapeutic Homeless Housing- Building 209.” If renovation for the building could be completed for less than $10 Million and $20 Million has been committed for the project, what was the purpose for seeking an additional $15.5 million for the same project? Feinstein did not respond to a request for comments.

And now, a new wrinkle: Feinstein says, “This legislation must still be passed by the full Senate and the House of Representatives, and I am firmly committed to seeing this project through to completion.”

No one seems to know just what “one step closer” actually means or the details of the “project” she vows to see to completion.

With the economic situation our nation is currently facing there is no guarantee that this legislation will make it to either House before 2012.

Because the VA has not been forthcoming about the advancement of these plans, it is difficult to know what has, and has not, transpired, what dollar amounts are actually needed, or what phases the project is actually in. Many questions have still not been answered. While Waxman contends that the design phase for building 209 has been completed, no Veteran Service Organization has seen evidence of any progress either on paper or on the ground.

Some things are certain, though. Unless the VA takes an aggressive approach to achieving the “five-year plan” to end veteran homelessness as announced in 2009, thousands of veterans will still be sleeping on the streets of Los Angeles long after the 2015 promised goal.

Studies have shown that because soldiers deployed multiple times to Iraq and Afghanistan are at significantly increased risk for post traumatic stress disorder (PTSD) and brain injury, experts fear the incidence of homelessness among soldiers returning home will escalate faster than it did after previous wars.

When completed, Building 209, a 46,000 sq. ft. three-story building, purportedly will house 70- 90 veterans- leaving some 8000 veterans to remain homeless on the streets. What promises can veterans then expect to hear from their leaders?

(Katharine Russ is an investigative reporter. She is a regular contributor to CityWatch and to the North Valley Reporter. Katharine Russ can be reached at   Katharine.russ@charter.net ) –cw