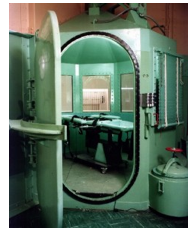 DEATH PENALTY POLITICS - If SB 490 becomes law, voters could have a chance to kill the death penalty. In the key section, the bill stipulates, “Provides that the state shall not carry out any execution following the enactment of this act unless the voters fail to approve this act.”

Those currently on death row would have their sentences commuted to life in prison without chance of parole. The last person executed in California was in 1986.

SB 490 is by state Sen. Loni Hancock, D-Oakland. On July 7, it passed in the Assembly Public Safety Committee by a 5-2 vote.  The bill now is in the Assembly Appropriations Committee. The bill was unanimously passed by the state Senate on June 2.

Hancock focused foremost on the costs of keeping inmates on death row, instead of putting them back into the general prison population.  “Since 1978, when voters approved the death penalty, only 13 people have been executed,” she said. “That’s 13 people over 33 years; 714 are still on death row at a cost of $184 million a year.  Capital punishment is an expensive failure and an example of the dysfunction of our prison system. California’s death row is the largest and the most expensive in the United States. It is not helping protect our people, but helping bankrupt us.”

Costs have risen largely because of the lengthy appeals process that keeps death row inmates in limbo, sometimes for decades. Recent court rulings have limited the means of execution over concerns of violating the Eighth Amendment’s ban on “cruel and unusual punishment.” One current holdup is the difficulty in getting the drug sodium thiopental, which courts have allowed to be used in executions.

It’s been a long time since inmates walked the green mile to sit in Old Sparky for 2,450 volts of electricity for 30 seconds.

Despite the new cost study, most backers of SB 490 previously opposed the death penalty on general principle. Moreover, if California began executing those on death row at the rate of Texas, an average of 23 per year the past decade, the cost per execution would drop quickly.

Some families of murder victims testified in favor of the bill.   “Today in California we’re laying off police officers, we’re closing crime labs, we’re eliminating victim services, and ending cold case investigations,” said Judy Kerr, whose brother was murdered. “We have a crisis of unsolved murders that are over 45 percent.  Today there are thousands of murder victim families who watch while we throw millions of dollars every year into a farce of a justice system that does nothing to address the needs of real families.”

“We believe it is the appropriate and carefully measured response to the most heinous crimes that society faces.  The death penalty deters future criminality if by no other means than by permanently incapacitating potential repeat offenders.” He agreed that the death penalty is costly. But he did not agree that we should abolish it just because it’s expensive. “We cannot put a price on justice,” he said.

A representative from Crime Victims United called the bill an insult to victims. “Those who have offenders serving on death row believe that they are provided justice for the atrocious crimes committed against them and their families,” she said.

Committee members differed in their responses.  Assemblyman Steve Knight, R-Palmdale, spoke out against the bill. He said the death penalty was a deterrent to crime and that amending this may lead to amending life imprisonment down the road.

Assemblyman Jerry Hill, D-El Camino Real, said he would support the bill because he was in favor of abolishing the death penalty though a vote of the people.

Should the bill pass, will Gov. Jerry Brown sign it?  The history of his position on the death penalty has been teeter-tottering over the years.  In the 1960s, when popular opinion and court decisions moved against the death penalty, he protested against it.

In 1977, he appointed the controversial Rose Bird to be the chief justice of the California Supreme Court. Despite a 1978 initiative in which voters approved bringing back the death penalty, her court halted all executions. In 1986, voters booted her from the court.

In his 2010 campaign for governor, Brown pledged he would not oppose the death penalty. The Sacramento Bee captured video of Gov. Jerry Brown’s interview in 2010 about the death penalty.  ”I said I would prefer a society that did not have to use the death penalty,” he said. “But my preference has been overruled, and not only by the Legislature but by initiative.”

Because the bill allows a vote of the people to decide the fate of the death penalty, he might sign SB 490. But Brown also obviously is aware of Rose Bird’s fate.

(Ali Meyer writes for CalWatchdog.com where this article was first posted.)  -cw