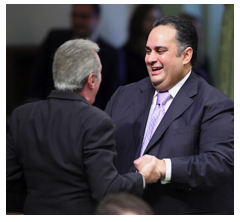 CALIF LEGISLATURE - A Fourth of July celebration in the Assembly was overshadowed on Tuesday by debate on another bill teaching about LGBT in California public schools. LGBT stands for lesbian, gay, bisexual and transgender. SB 48 would require California textbooks to include the historical contributions of LGBT individuals throughout history.


It sounds costly, and it will be. However, due to budget problems, California textbook updates have been put on hold until 2015-16.

Sponsored by Sen. Mark Leno, D-San Francisco, the bill reads, “Adds lesbian, gay, bisexual and transgender (LGBT) Americans, persons with disabilities and others to the list of groups of people whose role and contributions shall be accurately portrayed in instructional materials and included in social science instruction, and adds sexual orientation and religion to the list of characteristics that shall not be reflected adversely in adopted instructional materials.”

Leno said, “The historically inaccurate exclusion of LGBT Americans in social sciences instruction as well as the spreading of negative stereotypes in school activities sustains an environment of discrimination and bias in school throughout California. This is a primary obstacle to addressing California’s bullying epidemic that continues to plague a majority of LGBT youth.”

The bill was passed on a party-line vote by the Assembly with one Republican vote from Assemblyman Nathan Fletcher, R-San Diego.

The bill not only adds LGBT Americans, but as an added bonus to guarantee passage, people with disabilities were included in the bill’s language. These new categories come on top of an already long list groups that now must be included in history and social science instruction. The list includes, “women, black Americans, American Indians, Mexicans, Asians, Pacific Island people, and other ethnic groups.”

“We gain a greater appreciation for what it means to be an American,” John Pérez, D-Los Angeles, the first gay Assembly Speaker, said about adding the LGBT references to school curriculum.
Perez said it was “important to understand all of the subtitles and nuances in order to understand the person’s contribution.”

While opponents were often called “intolerant” by Assembly colleagues, most of the arguments in opposition centered around California’s declining quality of education.

Assemblyman Chris Norby, R-Fullerton, reminded Assembly colleagues that he is a former high school history and government teacher. He said the Assembly was “micromanaging” school instruction every time a bill like this was introduced.

“I don’t think this helps the teaching of history,” Norby said. “I think it’s a distraction.” He asked how teachers could ascribe sexual orientation to historic figures after the fact. “Am I supposed to ‘out’ James Buchanan after the fact? Do I identify Milton Friedman as a straight Economist?” Norby asked. “This doesn’t help the teaching of history.”

Assemblywoman Linda Halderman, R-Fresno, said she was not going to speak, but changed her mind when she kept hearing the only reason to oppose the bill was out of “intolerance.” Halderman said that some have referred to her as  a “Jewish doctor” and “that says we are different.” Halderman said that, instead of race or sexual orientation, people’s actions should be considered. The mandated classifications, she said, say “that you should not think first whether someone is honest, has integrity, does good work.”

Halderman objected to one particular class being singled out and instead said she was looking forward to a day when “I tell about who I am as a person.”

Said Assemblywoman Shannon Grove, R-Bakersfield, “Sexual lifestyle does not belong in our schools,” and it was “time to start tolerating Californians who don’t want their kids exposed to this.”
The bill does not specify what or how LGBT contributions will be included in textbooks, or how it will be taught in classrooms.

Backers of the bill insist it’s necessary and is part of a number of bills which make it is safer in schools for gay and lesbian students.

The bill’s analysis identified a similar previous bill, SB 1437 (Kuehl) from 2006, which prohibited the instruction or the adoption of any instructional materials that reflect adversely on persons because of their sexual orientation. SB 1437 was vetoed by then-Gov. Arnold Schwarzenegger.

In his veto message, Schwarzenegger said, “No teacher or textbook in our schools should ever intentionally demeanor disparage any group in our society, including discrimination based on sexual orientation.

“I am vetoing Senate Bill 1437 because this bill attempts to offer vague protection when current law already provides clear protection against discrimination in our schools based on sexual orientation.”
Gov. Jerry Brown has 12 days to sign or veto the new bill, SB 48.