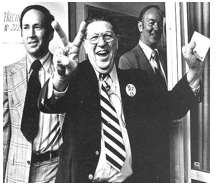 VIEWPOINT - A demagogue is a leader who obtains power by means of impassioned appeals to the emotions and prejudices of the populace. And a demographer is someone who studies the characteristics of human populations, such as size, growth, density, distribution, and vital statistics.

Thus, to coin a phrase, a  "demagogue-grapher” is someone who studies human population with his emotions and a political agenda.

Such must be the case of USC Professor of Demography Dowell Myers, interviewed by columnist and Proposition 13 [link] hater Steve Lopez in the May 31 issue of the Los Angeles Times, “Debunking the Myth of Prop. 13”. [link]

According to Myers, the decline in the number of families and children at the bottom of the population pyramid means that, in the future, there will be a surplus of family housing and the price will drop out of the bottom of single family residential housing.  Thus Myers asserts that Prop. 13 is “toast” because, according to him, it only works in a constantly rising real estate market.

Myers may be a competent demographer, but he is out of his league when he starts claiming that Prop. 13 is “toast” in a falling real estate market. To the contrary, Prop. 13 has “saved” California’s property tax base for public services and schools from ruination and saved politicians from political instability and being thrown out of office.  How so you say?

Under Prop. 13, the current value of a building goes up and down as the properties are sold, not as the market goes up or down. Without Prop. 13, as the value goes up, the reassessments would drive up the costs of taxes.

For example, without Prop. 13, the state gets used to the new amount of higher taxes and pays 10 new teachers’ salaries with the money. When the market goes down, the building value goes down and the owner gets another reassessment. Tax receipts decrease and the government no longer has the tax money to pay for 10 teachers. It can only pay for five teachers’ salaries. An artificial “shortage” of five teachers is created.

On the other hand, with Prop. 13 in effect, the current value of a building goes up by 2 percent annually in rising markets as long as the ownership does not change. The state pays for three teachers’ salaries with the money. The amount gradually increases, but is fairly constant.

When the market goes down, the building value goes down and the owner gets another reassessment. The taxes decrease and the government no longer has the tax money to pay for three teachers. It can only pay for two teachers. A “shortage” of one teacher is created. This may be much more easily handled than a five-teacher “shortage.”

The difference is this: In the first case, without Prop. 13, the state government spent the higher amount and expected it. When the market downturn came around, there was a huge deficit.

But in the second case, with Prop. 13 in effect, the government does not experience a severe shortage. This second way is the way to more stable government funding — that is, not getting rid of
Prop 13 or raising taxes through the roof by a split commercial-residential property tax roll.


By and large, the California newspaper media and academia are so biased against Prop 13 that they have failed to understand this simple concept.

Under Proposition 98, [link] 40 percent of the state budget must go to K-14 public schools. The problem was that, during the Real Estate Bubble, the public schools hired too many temporary teachers and ancillary personnel instead of socking the money away for when the inevitable bust in the Real Estate Bubble occurred. Now the schools are claiming they suffer deep budget cuts they cannot absorb.

The reality is that public schools must adjust back to 2001 budget levels.  If anything, Prop. 98 should be reformed, not Prop. 13.

(Wayne Lusvardi writes for CalWatchdog.com where this viewpoint was first posted.) -cw