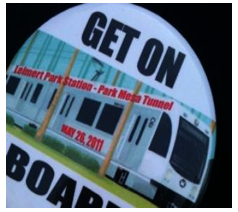 EXPO LINE DEBATE - Characterizing the motion by County Supervisor Mark Ridley-Thomas to underground the one-mile portion of the Crenshaw-LAX Line in Park Mesa Heights and return the Leimert Park Village station to the light rail project that failed at the May 26th Metro board meeting, as “pork barrel spending” is astonishing to say the least.

Undergrounding the train at Crenshaw/57th Street, right next to View Park Prep School, an intersection that the California Public Utilities Commission staff recommended for grade separation is “pork barrel spending?”

Returning the Leimert Park Village station to the rail project, an international cultural destination that Metro staff states would generate the third-most riders of any station along the line, behind only the LAX station and the Expo Line-Crenshaw Line junction station, is “pork barrel spending?”

Give us a break!

Far from “pork barrel spending,” the Ridley-Thomas motion sought to correct Metro staff’s shortsighted and illogical recommendations to bypass a major international destination and build street-level trains across busy Crenshaw Blvd. intersections for the next 100 years, in the process killing the last African-American business corridor in Southern California and our plans for economic revitalization.

Perhaps the public shouldn’t be surprised that Metro staff has proposed such a ridiculous thing.  This is after all an agency that built a train line that doesn’t go to the airport and recently cut bus service in the name of improving bus service.

But there is a bigger problem with characterizing Ridley-Thomas’ motion as “pork barrel spending” and it isn’t limited to Robert Leabow’s commentary, (link) it also could be heard in the statements of some board members at the May 26th Metro meeting.  That problem is a convenient ignorance of history.

Too many politicians and decision makers want to have a debate about the Ridley-Thomas motion while conveniently ignoring the long history of transportation decisions that have disproportionately harmed communities of color, all of which were done under the stated “greater good” for the region and with the promise of new commercial development that never materialized.

Books have been written about the East LA interchange, the 110 freeway and the 105 freeway.

While black and brown communities were unsuccessfully fighting the demolition of their homes, businesses and communities, the same politicians voting to send the bulldozers into South LA and East LA were sparing affluent communities like South Pasadena and Beverly Hills.

We intentionally mention those two communities because today Metro offers both of them not community-killing freeway overpasses or street-level trains, but rather tunnels: a 710 freeway tunnel UNDER South Pasadena and Subway to the Sea UNDER Beverly Hills!  Both projects cost multiples more than the original plans.  Even with the Mark Ridley-Thomas motion, the Crenshaw-LAX Line project is a fraction of the cost of them.

More recently on the Downtown LA-to-Culver City Expo Line Phase 1 project, while all residential communities along the line were fighting against street-level crossings, only Culver City was spared, while Crenshaw, Western, Vermont, Dorsey High School and Foshay Learning Center were placed on the chopping block in the name of “regional progress.”

The Ridley-Thomas motion petitioned the Metro board to reverse the long-trend of public sector dis-investment in South Los Angeles so that this important 100-year rail project would not bypass the Leimert Park Village community or be built and operate in a destructive manner that pushes the Crenshaw community backward instead of forward.

Maybe we shouldn’t be surprised by the result.  The politicians, led by Mayoral candidate Zev Yaroslavsky, were only doing what they’ve always done.

We did not win on May 26th, but we will be back, we are going to win the struggle, and because of our efforts our region and community will get a rail line built wisely … and justly.

(Winnifred Jackson it the President of Hyde Park Organizational Partnership for Empowerment, and Linda Ricks is the Chair of the Crenshaw-Slauson CRA Community Advisory Council.  Both ladies are residents of Hyde Park.) -cw