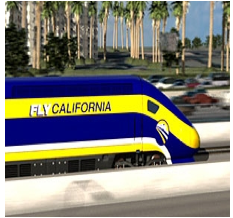 CALIF HIGH SPEED RAIL ISSUE HEATS UP - (Ed Note: High Speed Rail has moved to the front burner in California discussion this week. Some see it as a needed infusion in economic recovery and jobs. Others see it as an outrageous boondoggle. Here Lance Williams discusses the LAO report. Joel Fox [link] and Robert Cruickshank [link] offer their perspectives.)

California’s $43 billion high speed rail project is so fraught with problems that the Legislature should gear back on spending and turn the effort over to Caltrans, the Legislative Analyst’s Office says in a report released today.

The Legislature faces “challenging choices” about whether even to proceed with the ambitious project, the nonpartisan state office said in its report.

Proceeding in the absence of a major overhaul of the project’s governance, route structure and finances would represent “a huge leap of faith given the threats to the success of the project,” the report also says.

In 2008 California voters authorized selling $9 billion in bonds to help fund the project, which would link Northern and Southern California with passenger trains capable of traveling 100 mph. The state’s nine-member High-Speed Rail Authority has secured about $3.6 billion in federal aid for the project, and hopes to break ground soon on a $5.5 billion initial segment, linking Fresno and Bakersfield. Gov. Jerry Brown has proposed spending $192 million on the project in the coming fiscal year.

But in a downbeat assessment, the report urges lawmakers to spend no more than $7 million on the project next year, saying, “The Legislature lacks the good information it needs to make critical multi-billion dollar decisions about the project that it will soon face.”

According to the report, issues that “threaten successful development of high speed rail” in California include: financial constraints, a high-risk plan and “lack of accountability.”
The project’s “optimistic” 2009 business plan counts on federal, state and private funding that may not materialize, the report says.

“The business plan includes unrealistic assumptions about the receipt of federal funds to build the project, no discussion of the challenges of additional general fund debt-service costs (and) a lack of identified sources for the other funding,” the report says.

It’s particularly unrealistic to assume that the federal government will fork over an additional $16 billion for the project, the report says. Given “the current focus in Washington on reducing federal spending,” Congress may not authorize any more spending on the project, the report says.
In part to comply with federal funding deadlines, the rail authority has decided to push forward with construction of the Fresno-Bakersfield segment.

The report calls this a “risky decision” and a “big gamble,” saying major subsidies would be needed to operate the line until the rest of the system is up and running. It’s not even clear that the segment can be built in time to qualify for the federal funds; the plan has already attracted “significant local opposition” from agribusiness interests worried that the new tracks will disrupt farming.

The appointed high-speed rail board is so autonomous that the state can’t be sure that it is sufficiently considering the risks to the state’s finances if necessary federal funding to complete the project doesn’t materialize, the report says. It’s also not clear that the board has the expertise to supervise the “mega project,” it says.

The report urges lawmakers to slash funding to the project while its future is re-evaluated.
The state needs to negotiate more reasonable deadlines for obtaining federal aid for the project, the report says. If that’s not possible, the Legislature may want to pull the plug entirely, the report suggests.

Meanwhile, the Legislature should direct the rail board to reconsider which segments of the system should be built first, with an emphasis on segments that have a better chance of penciling out financially in the event the entire project isn’t completed.

Finally, lawmakers should turn management of the project over to the state Department of

Transportation, which has experience in running giant construction efforts. Taking the project away from the appointed rail board will ensure that “the state’s overall interests, including state fiscal concerns, are fully taken into account as the project is developed,” the report says.

(Lance Williams blogs at CaliforniaWatch.org where this report was first posted.) -cw