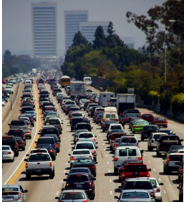 MOVING LA - While it’s easy to use phrases like “thinking outside the box” or “moving outside one’s comfort zone” to figure out how to plan our zoning and transportation planning, we have to be careful not to demean or denigrate those skeptical about various new ideas being floated around for a 21st Century City and County of Los Angeles.  Especially when the skeptics might be right.

I’m particularly influenced by my colleagues on the CD11 Transportation Advisory Committee and the Mar Vista Community Council, who are collectively smarter than I could ever hope to be on matters of urban planning, zoning policies, energy policy and mass transit.  Similarly, the more that the Expo Construction Authority, Caltrans, Metro and the LADOT allow volunteers to provide input, the more likely those entities’ learning curves will rise as well:

1) For example, when I floated the idea of having more Westside support for the optional Manchester/Aviation station for the Crenshaw/LAX light rail line project (link), a station which would be elevated above Manchester Blvd. and adjacent to the 405 freeway, a common response among those living north of Westchester has been, “How does this affect OUR  neighborhoods?”

Yes, the Westchester/Playa Del Rey Neighborhood Council has voted in favor of the station, but with the advent of the upcoming Expo Line, this freeway-adjacent station allows commuters from the South Bay and Southeast L.A. County to get off the 405 freeway at Manchester and jump on the train for a quicker shot at accessing the Expo Line than having to trudge those last few miles up the freeway.  This benefits the whole Westside and even LA County, not just Westchester.

Furthermore, Westside and Valley residents who want to access LAX now have the option of getting off the freeway at Manchester and being dropped off at the Manchester/Aviation station if those last few miles to LAX are just too clogged with traffic.  But it's still an alternative and it's foolish to presume everyone will use that option.

With the proposed and Measure R-funded South Bay Green Line Extension (link) to Redondo Beach (and Torrance if extra funding can be achieved), there will be that many more South Bay residents who can access LAX and the Westside without having to jump on the 405 freeway at all.  Again, however, it's still just an alternative that some, but not all, will use.

2) Of course, this regionally-minded thinking requires the acknowledgement that for very long commutes, a Metrolink-style of car/rail hybrid commuting needs to be given greater respect and accommodation, which means we need MORE parking, not less.  Unfortunately, this flies in the face of those who promote paradigms akin to “the automobile is evil” approach that tends to hurt, not help, the cause of establishing alternatives to the car commute.

There is no Metrolink in the South Bay and Westside, unfortunately, despite the attempts of myself and others to utilize the Harbor Subdivision Right of Way to link LAX to Union Station and the rest of the Southern California Metrolink/Amtrak network.  This means that—like it or not—light rail projects such as the Expo and Crenshaw/LAX MetroRail lines have to be viewed as quasi-Metrolink in nature with respect to how they interact with adjacent freeways.

It is not hard to conclude that freeway-adjacent Expo Line stations such as Venice/Robertson and Sepulveda/Expo will be first-rate transit hubs that connect buses, trains and freeways to each other (and ditto for the aforementioned optional Manchester/Aviation station for the Crenshaw/LAX Line), and that means parking.

Lots of parking.  Parking to encourage more car commuters to get off the freeways and streets to access Downtown, the beach, LAX and anywhere in between.  It would absolutely crazy not to have first-rate bus/rail and bicycle accommodations for commuters who live close to the light rail lines, but let’s not presume that car commuters will be unwilling to use this line…and we can rest assured they won’t drive 5, 10 or even 20 miles to use MetroRail lines without parking.

Hence we need to stop having MetroRail station parking be free so that we can pay for more parking structures, and we need to encourage developers to build more parking, not free them up from parking requirements altogether—which L.A.’s Planning Department is trying to do with their current Modified Parking Requirement District Ordinance.

Note to LA Planning and to LA’s political elite—the population of LA isn’t going up as much as anticipated, and we do not need to let developers off the hook.  Flexibility in parking requirements for certain areas is just fine, but developers need to be held accountable for variance requests and mitigate either with parking and/or paying for our mass transit projects.

3) Now that the Expo Line is on its way to opening up to Culver City in 2012 and to Santa Monica in 2015-16, let’s have more community input for station design and mitigations than we’ve seen so far.

The Expo Line design/planning appears to be run in a rather top-down approach, and the land use/design meetings I’ve seen with the Metro-led Crenshaw/LAX line project looks more open than what I’ve seen with respect to how the Expo Authority has included the neighbors in the design/mitigation process.

This top-down approach may be more of a function of how Los Angeles’ Mid-City political leadership (who now dominate the Expo Authority Board) tends to be run, or it could be a response to the attacks that the Expo Authority has had to endure from all sides.  Yet more adjacent sidewalk repair, open space and greening along the Expo Line are all overdue.

And while I’m not too thrilled about the one-size-fits-all station design, I’m hoping that better station covers can be considered to be provided to shelter from the sun, occasional rain and elements.  The CD11 Transportation Advisory Committee just overwhelmingly voted in favor of exploring solar panels on Expo Line station roofs for both shelter and to help pay for lighting and other station amenities, and it’s hoped that both the Expo Authority and Metro can be open to that idea as well.

As with all important issues, the need to remain open-minded and be flexible is as strong for transportation and urban planning as any…but this especially applies to the transportation experts at Metro and other governmental agencies who, while more educated than the rest of us, still have to be aware that their conclusions are still based on the assumptions of inherently-biased and inherently-imperfect human beings.

By vetting this with more volunteer/grassroots individuals and other entities, our future cannot help but benefit from the greater cumulative brain power provided by the greater community.

(Ken Alpern is a former Boardmember of the Mar Vista Community Council (MVCC), previously co-chaired its Planning and Outreach Committees, and currently co-chairs its MVCC Transportation/Infrastructure Committee.  He is co-chair of the CD11 Transportation Advisory Committee and chairs the nonprofit Transit Coalition, and can be reached at Alpern@MarVista.org.    The views expressed in this article are solely those of Mr. Alpern.) -cw