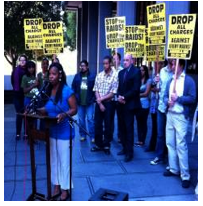 DA DROPS CHARGES AND MAKES DEAL - A plea agreement has been reached between Jeremy Marks’ attorneys, Mark Ravis and Karen Travis, and the District Attorney’s office to drop all charges but one … “resisting arrest” …  and  that charge will  be reduced to a misdemeanor  and wiped from his record after he completes three years of probation.

You will recall, Marks is the Verdugo Hills special ed student who was jailed for months on questionable charges and conflicting school police reports. (Get the full back story here)

DA Public Relations Officer, Sandi Gibbons, announced  that  “On April 26 Jeremy Marks pleaded no contest to Count 1, PC 69 (resisting an executive officer), as a felony. He received one year in county jail and given credit for the 339 days served so no more jail time. He also was placed on three years formal (supervised) probation with ‘gang conditions’.”

Ravis and Travis took Marks’ case last December at the behest of Celes King, Vice Chairman- Congress of Racial Equality of California (CORE-CA), and cited, “This case is vitally important because it illustrates the willingness, near eagerness it seems, of rogue police officers to criminalize youthful behavior and send kids to state prison, make career criminals out of them and to ruin their lives and the lives of their families.

“The community is standing by to see if the District Attorney and other government officials are really going to continue to support these cops and continue with the nonsensical charges against Marks or do the right thing and dismiss the case and discipline the Officers.”

Back in February, Ravis accused the DA of overcharging the case and illegally seizing privileged lawyer/client documents in a raid conducted on the Marks’ home in January.

Ravis said at the time, “The DA did nothing to support those charges even though the charging document alleges otherwise.  This is, of course, why we expect to win.”

No eye witnesses were interviewed by the DA, no evidence that Marks committed the crime was ever presented and the case hinged solely on fabricated “gang affiliations” charges that would ultimately prejudice the jury and pollute Marks’ character.

The case should have gone to trial but Mark’s attorney negotiated a “plea deal” that would be equally detrimental to Marks and sold it to Marks as a “sweet deal.”

Marks’ mother Rochelle Pittman said that in January, attorney Ravis had asked her for $20,000 and told her that he hadn’t intended to take the case pro bono.

On April 29, the ANSWERLA (Act Now To Stop War AND End Racism) touted Marks’ innocence and slammed the DA and the Judge for assaulting Marks’ basic rights.

According to ANSWERLA, “D.A. Steve Cooley wanted Jeremy to accept a plea deal of three years in jail. Inside the courtroom, the D.A. and judge put up one legal roadblock after another. It was a lopsided legal battle where important evidence in the D.A.’s possession was not shared with the defense team. The prosecution presented lie after lie about the existence of an additional video recording of the incident that would have strengthened Jeremy’s case.”

“The cops and the D.A. took their aggressive campaign to Jeremy’s family home. In January, the police executed a Gestapo-style raid, drawing guns on Jeremy’s family and neighbors and illegally seizing attorney-client privileged documents.

“In the face of so much foul play, there is no telling what direction the case would have taken in a courtroom. The authorities wanted to lock him up and throw away the key.”

Then why the plea deal? Why not a trial to prove Marks’ innocence? Why not discipline of the officer who contradicted her own words under oath?

Following ANSWERLA’s shining some daylight on the case, and in a in a complete “about face,” attorney’s Travis and Ravis offered this:  “There are facts about the evidence and Jeremy's background which were problematic to his case. In view of that evidence, trial would have been a gamble for Jeremy and he could have ended up with more than 6 years prison time.

“Both Jeremy and his parents were fully informed about all of the pros and cons and it was THEIR DECISION to take the deal. Jeremy's best interest was and should be the only factor at play here.”

Problematic? Is there any case before a Judge or Jury that is not problematic?

Child advocate and civil rights attorney, L. Wallace Pate, followed Marks case closely and was not pleased with the defense given to Marks. “I spoke to two of my colleagues,” she told me, “who felt as I did that the case should have gone to trial immediately and it did not.  The DA’s plan was to weave a seamless web of deception inferring that Marks was a gang member and a “shot caller”.

“Their plan was to pollute a jury to make sure the jury panel bought their lie and gave him the maximum time and sentence.

“I had in depth conversation with the family, talked to the kids who were at the bus stop and was totally convinced the case was bogus.

‘Cases, such as Jeremy’s, require a competent attorney who would insist upon gang experts qualified to testify as to the issue of Marks relation with a gang. This did not occur in this case. Marks has never been involved in any gang related crime, ever. Those attorneys failed Marks.”

The DA’s Gibbons recounted the “gang conditions” placed on Mark’s probation.  They are: “1. Do not associate with persons who are known gang members, associates or affiliates and stay away from places where such persons congregate unless you are participating in an authorized anti-gang program.

2. Do not possess any gang paraphernalia, nor exhibit any indicia of gang affiliation, nor dress or wear any clothing associated with any gang, nor flash or use gang hand signs in any way.

3. Obey any gang injunction that applies to you. Search and seizure conditions were also imposed, and the defendant was ordered to "stay away from officers involved in this case."

Marks’ mother said that , “Jeremy took a Plea Deal recommended by the Supervising DA over the Prosecuting DA. We were told by Mark Ravis and Karen Travis that the reason they wanted to make a deal was because the Case was receiving too much media attention and they basically wanted it to go away. So Mark Ravis described it as Great News.”

Pittman said that her son had repeatedly requested copies, in writing, of the case files from attorneys Travis and Ravis but never received them. In January both wanted nothing to do with any “plea deals.” But Pittman knew that it was her son’s decision since he was now 19 years old.

“This takes a lot of pressure off of him because he knows that they would never give him a fair trial after everything that they've already done to us. The only thing that is certain is the fact that my son can be anywhere, anytime and they will try to violate him to throw him in jail,” she told me.

Pittman said that police are already watching Marks. “On Friday 04/29/11 at 8:43pm a police car was sitting outside our home with their lights out, my son was at home asleep in his bed. When they saw me they turned the headlights on and drove away. It scared the hell out of me because I was shocked to see it happening so soon, the Hunt for Jeremy Marks!”

Dr. Ernie Smith, Professor of Clinical Linguistics- Charles R. Drew University of Medicine and Science, chimed in on the Marks case emphasizing the words “Special Needs” and noting that if a child has difficulty understanding basic lower school curriculum, it stands to reason that he/she  could not understand a complex legal system. The law says the child has to understand English proficiently.
That is the scale afforded under the CA Constitution Article I Section 14. 3.

“Every year,” Dr. Smith said,  “reports appear in the media that African American students, especially the males, have the lowest reading and achievement scores, the highest dropout rates and highest rates of illiteracy in California.  Research studies and official investigations conducted have revealed consistently that there is a high correlation between reading failure and juvenile delinquency.

“I maintain that, in the California criminal justice system, these data on lowest reading and achievement scores, the highest dropout rates and highest rates of illiteracy as well as the disproportionate number of African American males assigned to Special Education classes are often ignored by the attorneys representing them.

Because these data are blatantly ignored by their attorneys, to the damage, detriment and hurt of Special Needs African American males, there is a correlation between the reading failure of Special Needs African American males and the incompetent legal representation they are afforded that is a predictor of unjust criminal convictions and wrongful penal incarcerations.”

With the overly broad “gang conditions” placed on Marks’ probation, coupled with the ability some officers and the DA have demonstrated over the past year and a half to “manufacture” a case against any child, is there any question that Marks could EASILY land in prison anyway?

Can Marks safely attend school, go to a store or an event without fear of violating his probation?

If this experience is any indication, it would appear that Jeremy Marks’ challenging journey through the justice system has likely just begun.

(Katharine Russ is an investigative reporter. She is a regular contributor to CityWatch and to the North Valley Reporter. Katharine Russ can be reached at Katharine.russ@charter.net ) -cw