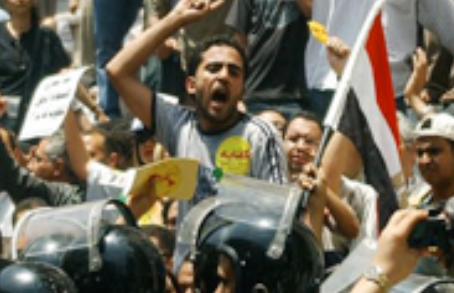 When tomorrow's historians assess the origins of the Arab Spring Revolution, a number of plausible causes will present themselves. Oppressive regimes, brave and unemployed populations digital communications and WikiLeaks -- all are factors in uprisings that have spread across the Middle East and North Africa. Yet like almost every revolution in history, from the French Revolution to the fall of the Soviet Empire, the recent turmoil was catalyzed by skyrocketing food prices. And in a worrying portent of climate change's capacity to bring chaos, it is a flurry of extreme weather events which has caused this record surge in the price of food staples.

While few predicted the Arab Revolution, there was plenty of warning. The last time world food prices spiked, in 2008, violent riots broke out across the developing world, including in Egypt. Then, in January, the UN Food and Agriculture Organization's Food Price Index reached the highest levels on record, up 20% on last year. An FAO economist quietly voiced his concern that civic unrest was likely; the rest is, or will soon become, history.

Even more than corruption and repression, hunger drives people to revolt. It was hunger that literally and tragically lit the torch paper in Tunisia when a young salesman named Mohamed Bouazizi set himself alight after officials confiscated his supply of fruit and vegetables. The World Bank estimates that the average person living in a poor developing world city spends around 66% of his income on food. In years like 2008 and 2011, when the global supply of food will fail again to meet global demand, the effect on this typical citizen is magnified. High food prices reduce peoples' ability to meet even basic needs.

Food has been central to the uprisings, stoking resentments related to other problems such as unemployment and authoritarianism. "Bring us sugar" was the chant in Algeria as demonstrators looted flour warehouses. Government responses to the protests are an indication of food's critical role. Tunisia's deposed president Ben Ali tried and failed to appease the crowds with a promise to reduce food prices. In Yemen the government offered protestors a cap on food prices while the Algerian Interior Minister attempted to "turn the page" on food riots with cuts on sugar and cooking oil duties. In a similar move, the Iraqi government has delayed a planned increase in import tariffs.

Alongside growing demand from emerging giants such as China and India, a lack of supply is to blame for the price rises as unusually extreme weather has devastated harvests in key export nations. The pattern is remarkable. Last summer Russia experienced its worst droughts in half a century, prompting a ban on wheat exports from the world's second largest exporter. Then we saw floods in Canada and Pakistan disrupt the planting season. Finally, in January, Cyclone Yasi wreaked havoc on Australia, another vital exporter of wheat and sugar cane. The net result was a significant leap to 245 points in the FAO's Cereal Price Index -- and revolution in the squares of Cairo, Tunis and Tripoli.

It would be premature to blame this spurt of extreme weather events on climate change. Yet we can say that in the future climate change will cause an increased rate of precisely the type of disruptive weather that causes food shortages. The most recent findings from the International Panel on Climate Change forecast more regular droughts and floods, including in strategically crucial export nations like Australia and in African countries which already struggle to feed themselves.

The relationship between climate change and food prices is further complicated by the emergence of biofuels as a source of 'clean' energy. First generation biofuels like corn and sugar cane offer lower carbon intensities than fossil fuels, but they also divert crops away from food production. Experts dispute the exact effect, but many observe a direct food versus fuel conflict. The International Food Policy Research Institute attributed 30% of the increase in food prices between 2006 and 2007 to biofuels. The Bush administration, which strongly backed bioenergy, had previously suggested the figure was 3%. Higher oil prices add to the vicious circle: they simultaneously drive up food prices and make biofuels more economically viable. So if we want to address climate change to avoid food price hikes and the accompanying geopolitical upheaval, we need to think very carefully about our use of biofuels.

Food shortages can spark conflicts anywhere. But the unsettling reality is that some of the nations most vulnerable to the global food market are also among the most strategically critical in security terms. Many Middle Eastern and African countries are high net importers of food, which means they are at the mercy of price volatility generated by events on the other side of the world. Egypt, for example, is the world's biggest importer of wheat. A poor harvest in Australia, where people spend 19% of their income on food, can bring chaos in Egypt, where that figure is closer to 50%.

Climate change presents a double whammy for nations like Egypt. Their food deficits will increase as climate disruption hits domestic crop yields. Yet when they turn to the international markets to make up the shortfall they will encounter more price spikes as climate-related weather events strike exporting nations.

We do not yet know if the recent uprisings will leave us in a better world. They have ousted notable despots in some countries and opened the way for civil war in others. One thing is clear, though. The revolutions serve as a warning of how extreme weather can, via volatile food prices, drive geopolitical chaos. The human impact of climate change is suddenly tangible.

(Tommy Stadlen is a London-based strategy consultant who specializes in sustainability. He is an op-ed contributor to media outlets across the world on climate change and sustainable business. This article was posted first at HuffingtonPost.com)   -cw