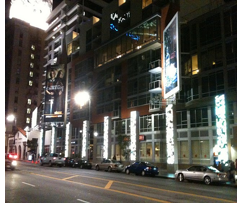 The debate over the definition of Art is as timeless as Art itself. This spells opportunity for LA’s City Hall, a creative institution filled with wild imaginations and machinations that never fail to seize opportunities to short-cut the process and side-step the public.

Consider the CRA, the good folks responsible for bringing Hollywood & Vine to life with the LED pillars on the 1600 Vine Project that are now positioned as an Art installation, a convenient work-around on the city’s sign ordinance and a mechanism for establishing signage with revenue potential on a CRA development. Crafty!

Consider the Wilshire Grand Hotel, a large redevelopment project that promises architectural lighting features and an electronic skin that will display colored, changing images. In any other town this would be referred to as a billboard but Councilman Ed Reyes settled the issue by declaring, “It is art. And I believe it adds more culture.” Bold!

The Wilshire Grand Hotel debate over the nature of advertising and the difference between a billboard and a building disguised as a billboard involved architects, artists, planners, developers, and LA’s City Council.

Reyes further clouded the issue by allowing that an LED wrapped building is permissible because "It will be artistic in nature.”

“Artistic in Nature” has long been the domain of Barry Sanders, President of the Recreation and Parks Commission and proponent of a crafty proposal to position a common advertising package in public parks as an Art installation, one that would simply use imagery of Yogi the Bear on buildings, trash and words such as “play” and “picnic” that encourage responsible park use. Ingenious!

Sanders demonstrates a knack for creativity as he positions signs as murals, advertising fees as donations, and illegal signage as protected “government speak” that warrants the support of the City Attorney, not warnings of legal limitations.

From the CRA to the City Council to the Recreation and Parks Commission, the debate over the definition of Art demonstrates a desperate pursuit of revenue that has the City of LA challenging the same laws, codes, and rules that it is responsible for enforcing.

Through it all, the definition of Art remains unresolved. It has be said that true Art stirs an emotional response from the audience and the fact that the City of LA is able to continue this charade without stirring outrage from the public demonstrates that these schemes fail to qualify as Art.

At the same time, watching Councilmembers and Commissioners perform their lines with a straight face as they claim a commitment to avoiding visual blight is such a compelling delivery of fiction that perhaps it is their performance that is Art.

If only it were believable.

(Stephen Box is a grassroots advocate and writes for CityWatch. He can be reached at: Stephen@thirdeyecreative.net.This email address is being protected from spam bots, you need Javascript enabled to view it) -cw