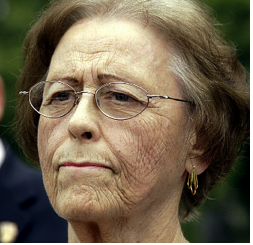 Since Republican officials like Mike Schroeder, who made public that harmless little email of yours (the one with President Obama's face on a chimpanzee), won't apologize to you, please permit me to step in and issue you a heartfelt apology in their place.

I am sorry that you were called a racist for sending an email comparing our first black president to a chimp.

Some people are just too dim to appreciate wit that dry.

And I am particularly apologetic that my cohorts in the media have portrayed you as some kind of unreconstructed Orange County cracker, out of touch at age 74, blathering about the president's birth certificate. The consensus has been that you should resign for the good of the party. That was my first reaction, too, I must confess. But now I know I was wrong.

The more I think about it, I see your email as a sign of progress. Before you came along, people used to think that older Republican activist types didn't believe in evolution. But you, with your glorious email, exploded that stereotype by putting a picture of a person and an ape together. Thank you, then, for your endorsement of Darwin, and of science. It's commendable. (Plus, I must say I'm impressed with your ability to send email).

I'd also like to express regrets about the ageism in the coverage of your controversy. Some people want to use this story to say that Republicans are just an old white people's party, and that you represent an organization that is out of touch with California.

But I know better.

You are California! And this is still an old white people's state, thank God.

You and I know this, but a lot of people think that California, being a democracy and all, should be governed by the decisions of the rising generation of Californians in their 20s and 30s, a very diverse lot.

But because of our governing system and its inflexible process of ballot measures, you and people your age - wiser than us younger folk - made all the big decisions on taxes and spending and other its years, even decades ago.

California, in a very real sense, is still governed by our Marilyn Davenports.
Which means that people like me don't really have to engage or even bother voting. Thank you for saving us the trouble.

If we ever wanted to make our own decisions about taxing and spending for ourselves, we'd have to do the hard work of redesigning our system. I for one find it easier to live with the decisions you've made.

As you've shown throughout this episode, your judgment is impeccable.

Yours until death, or until beyond death (depending on when the constitutional convention comes),

(Joe Mathews is Journalist and Irvine senior fellow at the New America Foundation, Fellow at the Center for Social Cohesion at Arizona State University and co-author of California Crackup: How Reform Broke the Golden State and How We Can Fix It (UC Press, 2010) This article was posted first at FoxandHoundsDaily.com). –cw