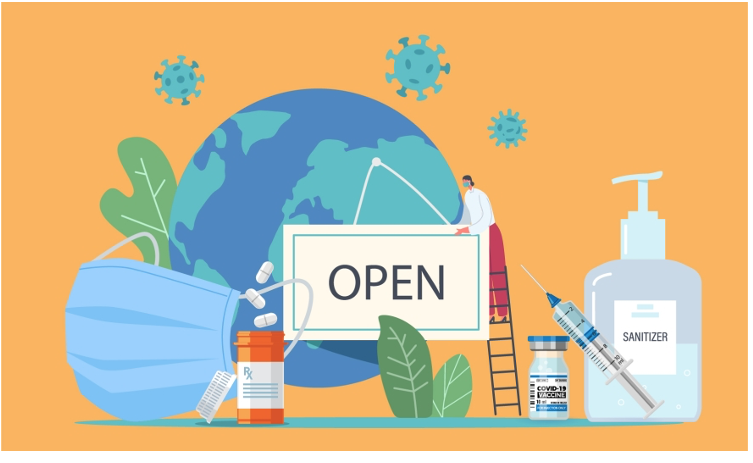 GELFAND’S WORLD - It's been a long two years and it seems like this month has been a replay of last January.

Suddenly the case numbers went up, people were dying, and hospital administrators started worrying aloud. This may seem like a strange time to start discussing how soon we can call off the pandemic and go back to our normal lives, but may I suggest that this is exactly the right time to start talking about it.

Let's start by conceding that the original wishful thinking -- that there would be a few thousand cases and then the whole thing would quietly disappear -- did not happen and is not going to happen. Similarly, we had a right to expect that the entire U.S. population would be 99% vaccinated by now, and it didn't happen either. By now we've realized that it's not going to happen.

So what's left and how can we plan for it?

Can we set an official date -- perhaps one year to this day in the future -- when we will treat the pandemic as officially over, whatever the case count happens to be? Would the American population accept January 17, 2023 as the official end of government control?

Here is my defining principle for the pandemic being officially over: If at some point there is a vaccine that is 95% effective in preventing the onset of the disease and 98% effective in preventing death due to Covid-19, and if I get inoculated with it, then I'm done. I'm willing to go to shopping malls, restaurants, baseball games, and grand opera without worrying about the Covid and probably without even wearing a mask.

So far, we're being a bit speculative about that promised vaccine, but it's not that farfetched an idea (see below). The critical point is that such a vaccine would allow every adult to make a personal decision as to whether or not to accept a demonstrated biological preventative that has been shown to work by traditional scientific methods. Those adults who choose to refuse will be free to do so, just as they are today.

The rule ought to be that the unvaccinated will not be able to infect anybody who has been vaccinated. If we get to that point, we ought to declare ourselves free of the restrictions we have been accepting.

Let's also consider an alternative version of this line of speculation. Suppose it turns out to be true that the Omicron variant (or some other variant) runs through the whole population and that those who have had three shots and have probably been subjected to Omicron challenge are effectively safe from getting sick or dying from the Covid. I would treat that as another version of being done with the pandemic. Again, those who choose to avoid the vaccine are at risk from death or long-term disability from the disease, but that would be their freely chosen behavior.

By the way, the latter approach has one additional requirement before we can decide that it is satisfied. That would be that the naturally occuring virus has made its rounds through the whole population. Omicron or whatever variant comes after it would be, in essence, the naturally occuring booster that confers final immunity. Note that we don't actually know whether Omicron is going to be this kind of wonder drug, in spite of what the anti-vaccine crazies want to tell us. But we ought to know soon enough.

We will find out that we have gotten to the right point when Covid-19 deaths are essentially down to zero in the vaccinated population. Perhaps we will get to the point where no more than one in ten-thousand vaccinated Americans are dying of Covid-19 in a given year

The difference between governmental and private regulation

What I am saying here only applies to what government does. There should be no law or statute that prevents the L.A. Opera or the Dodgers from demanding proof of vaccination. What I am talking about here is the legal limits on what government can and cannot force them to do. But this little part of the discussion leads to another point which is not so minor.

Many of us have dutifully gotten our 3 doses because we have a natural fear of the disease. The word "intubation" has become the modern version of the bogeyman. We may wish to continue to carry out our social interactions only among people who are likewise fully vaccinated and boosted.

It may be that some establishments will cater to that group of people by requiring proof of vaccination. There ought to be an icon at the entrance to such establishments (and on their websites) informing the public of their requirements. American establishments and their customers can voluntarily adopt a system like the one the Europeans have been using as a matter of law.

Declaring the pandemic restrictions over

But if we can get to the point in our vaccine technology where all but a tiny handful of the vaccinated are protected against sickness and death, then most of us, I would hazard a guess, would be ready to call it quits on the government mandates. We would figure that we have done all we can do and are ready to go back to the days when we can go out.to the ballgame without masking up like we are going into the surgical ward.

How difficult is the task, and how long will it take?

I don't think it's going to require a magic wand. The hard part was showing that putting a small amount of messenger RNA (that's the mRNA that they are always talking about on the late news) into your arm muscle can confer immunity. Remember, it's just a way that we teach the immune system to arm itself against this particular piece of protein. The technology for wrapping mRNA in a little bit of lipid and tailoring it to get into your cells has been around for a while and has proven itself to be effective.

The only part left is to upgrade the old vaccine to one that goes after all the more recent variants from Delta to Omicron to whatever else comes around next. Technically, there is probably no reason to avoid adding some anti-influenza components to the whole mash and injecting it all together.

By the way, it's common practice to mix vaccine components that go after multiple strains of a particular illness. For example, there are a couple of pneumonia vaccines that go after 13 and 23 strains, respectively. That's right, there are a lot of different strains of pneumonia germs and instead of coming back for 13 different shots, it works to give you all of them in the same, small, nearly painless dose. Research work is being done on multivalent influenza vaccines even as we speak using the same mRNA technology that has been used so successfully in the Covid-19 vaccine. At the same time, numerous labs are attempting to develop multivalent Covid-19 vaccines and have been testing them in non-humans.

At the appropriate moment, effective vaccines against all the Covid-19 variants will be tested in humans, much as was done for the original variant back in 2020.

There is one final alternative that is possible though increasingly unlikely. That's for the remaining people in this country to get wise and get vaccinated. What we are seeing now is that about a million doses of the Covid-19 vaccine are being given each day. This number probably represents a combination of those getting the booster shot and a few of the unvaccinated who have decided to get the shot. Perhaps its the death toll on the nightly news that is convincing them, or maybe it's just that lots of time has gone by since we started vaccinating, and the newly vaccinated are not falling over dead in the drugstore parking lots, in spite of claims to the contrary by the crazies.

Official estimates for the County of Los Angeles show that in the 65 year and older population, 89% have been fully vaccinated and 98% have had at least one shot. If you look at the numbers for the entire population in the county, we are now up to 68% fully vaccinated. That's just under 7 million of us.

Leaving them to their fate

It may seem harsh to accept the fact that the unvaccinated are choosing to tempt fate and that some of them will die a particularly unpleasant death as a result. The alternative would be to adopt a more rigorous legal requirement to be vaccinated -- something that would meet strong resistance. The only other alternative I can see is if science finds some third way to either treat or prevent the disease without stirring up the anti-vaccine people. In the meanwhile, perhaps a year from now, the rest of us will be enjoying our immunity and going about our lives without fear.

January 17, 2022 is the 25th anniversary of the murder of Lawrence Austin, killed by gunfire in the lobby of the Silent Movie Theater on Fairfax.

(Bob Gelfand writes on science, culture, and politics. He can be reached at amrep535@sbcglobal.net)