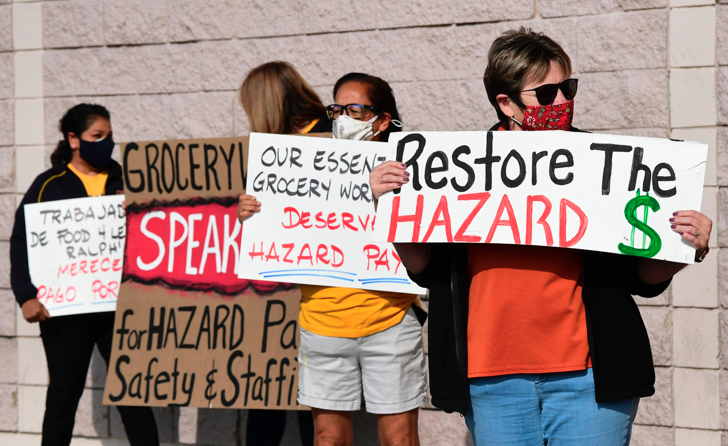 That’s one revelation coming from a survey of 10,287 workers who described working conditions at Kroger stores in 20 counties across Washington state, Wyoming, Colorado and much of Southern California. The Economic Roundtable, a Los Angeles-based nonprofit organization, conducted the research. The survey was a critical foundation of a report that documents employment and corporate investment practices. Titled Hungry at the Table and released January 11, the report also examines Kroger’s labor practices, economic workings and community impact. The work was commissioned by the United Food and Commercial Workers union. (Disclosure: UFCW is a financial supporter of Capital & Main.)

The title comes from a poem by Joyce Harjo that declares, “The world begins at a kitchen table. No matter what, we must eat to live.”

“This is a store that has vast supplies of food. And they’ve got workers surrounded by food all day long and don’t have decent access to food.”

That poem was chosen by Dan Flaming, president of the Economic Roundtable and co-author of the report with Peter Dreier, Patrick Burns and Aaron Danielson. The idea resonated with research that shows over three-quarters of Kroger workers are without reliable access to a sufficient quantity of affordable, nutritious food, according to U.S. Department of Agriculture standards.

“This is a store that has vast supplies of food,” says Flaming. “And they’ve got workers surrounded by food all day long and don’t have decent access to food.” Workers get fired if they eat a single grape, or if they take food out of the dumpster, Flaming says. “It’s just egregious that a grocery store is staffed by workers who can’t eat decently.”

Workers in the Kroger chain are forced to make unsupportable choices, Flaming says. “It’s people choosing between paying rent, buying food and keeping the car running so they can get to the job.”

Stores in the Kroger empire include such familiar names as Ralphs, Food 4 Less and King Soopers. 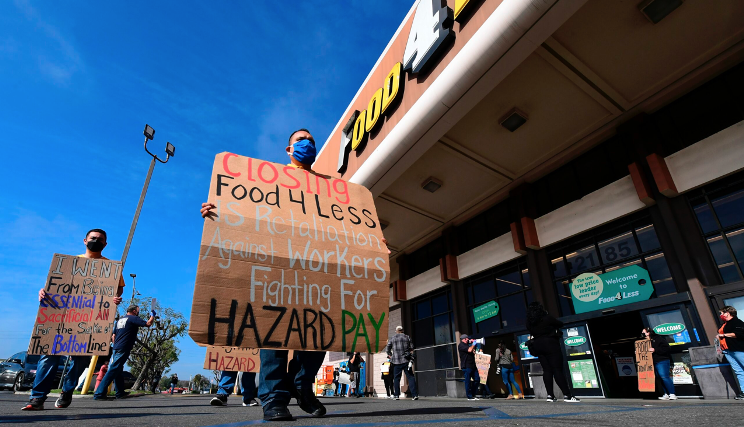 Capital & Main queried Kroger about pay and scheduling practices. In a statement a company spokesperson defended its wage scales.

“At The Kroger Family of Companies, we care deeply about our associates and show it through many actions like the continued investment of hundreds of millions annually to increase wages and rewards and provide affordable health care benefits as well as our commitment to offering an opportunity culture where our associates can thrive and advance.

“Since 2017, we’ve invested significantly to increase our national average hourly rate of pay from $13.66 to $16.68, reflecting an increase of $3 per hour or simply stated as a 22% increase.

“As America’s grocer, we have balanced significant wage investments for our associates while keeping food affordable for the communities we serve.”

Jeanne Olsen has worked at the Ralphs in La Cañada, north of Los Angeles, for four years. She works in the deli, where she samples cheeses — the brand she promotes supports the practice so she is equipped to answer questions for customers and make recommendations. “Sampling a cheese and eating a cheese are two different things. You can taste the cheese so you’ll be able to tell a customer [what it’s like],” she says. “It’s very hard to do when you are starving — literally my son and I lived on ramen for a year.”

Olsen says she makes $14.25 an hour; her monthly rent is $1,550. She walks the three-plus miles to and from work because she can’t afford a car, and collects recyclables that yield $150 or so a month.

The Economic Roundtable study uncovers many such stories. Its research found the bottom pay rate at Kroger stores ranges between $11.10 to $14.30 an hour.

The report points out that across the grocery industry, 29% of the workforce lives below or near the poverty line.

If that’s the industry standard, why pick on Kroger?

As the country’s largest grocery chain, Kroger has had a role in setting that standard, explains Flaming. “Most of their expansion has come through buying up smaller grocery chains that in many cases had decent employee practices and high levels of customer service.” Meanwhile, Walmart, which also sells groceries, has created a template for wage and employment practices in the grocery industry for Kroger and others to follow.

The Economic Roundtable study reports that across the grocery industry, 29% of the workforce lives below or near the poverty line.

There are risks in trying to replicate the Walmart model, Flaming says — as when policy and work structure shortcuts stretch employees thin.

Ask Sofia, an employee at an L.A.-area Ralphs (she asked that only her first name be used). Her work schedule: Arrive at 5 a.m., sweep the store, clean the bathrooms. “After that you put down the mats at all the registers, you collect all the go-backs, you put away the perishables, and you have to wash the windows on the glass doors. You have like an hour to do this.” Sometimes she has to round up the shopping carts in the parking lot. And if a customer shows up at 8 a.m., she must drop everything to staff the check stand.

Ralphs should pay for one more employee, she says. “The 5 a.m. shifts should be shared by two people for what they want done. No — it’s on that one person.”

Her income is variable. Sofia earns $15.30 an hour. She’s been working a 40-hour week because of co-workers out with COVID, but for the subsequent week her hours have been halved.

The unpredictability is difficult financially, but even at a full-time schedule her rate is not a living wage.

Kroger “is the 17th largest company in the country in terms of revenue and the fourth largest in terms of employees, some 465,000,” says Peter Dreier, a coauthor of the Economic Roundtable analysis and a professor of politics at Occidental College in Los Angeles.

CEO Rodney McMullen got a pay bump of 6% in 2020 to $22.4 million — the proportion of his income to those of his employees is 909-to-1, the study points out. That level of executive pay is enabled by stock buybacks, in which the company buys back its own stock, and then with fewer shares each share gains value. Board members and top executives receive part of their compensation in stocks, Dreier explains.

In Hungry at the Table, Dreier profiles Kroger’s board of directors (including former Secretary of Transportation Elaine Chao, spouse of Sen. Mitch McConnell). The summary reveals an eye-popping litany of income and interlocking corporate interests, and even discloses the square footage of some directors’ palatial residences.

In 2020 as the pandemic gained ground, various employers provided “hazard pay” or bonuses to front-line workers interacting with the public, and local jurisdictions followed suit to enact ordinances establishing what was popularly called a “hero pay” standard. Prior to the passage of the ordinances, Kroger boosted hourly rates in March 2022 but revoked the increases in mid-May. Then, after the “hero pay” laws were enacted, the company began closing down stories rather than paying the new rate — an hourly boost of $2.00, $4.00 in some cities, depending on local wage rules.

Three busy Los Angeles stores were closed — Kroger claimed they were “underperforming,” but also cited the Los Angeles ordinance as a reason.

“Kroger has made a lot of money during the pandemic,” Dreier says.

Meanwhile, “They politically fought attempts by cities like L.A. and Pasadena to try to adopt hero pay through government ordinances. And they lobby, they spent money on campaign contributions.”

Flaming says the company’s practices should give investors pause. “This is a company acting in a way that dilutes the value of its assets, running its brand into the ground.”

There are risks trying to replicate the Walmart model, Flaming says. Kroger has expanded by buying up local grocery stores that thrived based on customer service. The company enjoyed a lot of growth purchasing local grocery chains, but as neighborhood markets change to a low-staff, low-service model, they lose the things that keep customers coming back, Flaming explains.

Corporate responsibility and standards are one metric investors look at.

“To survive the test of public respectability they need to do better. They need to raise wage levels and give workers more hours, they need to be a more equitable employer,” he says.

Some change might come both through local city legislation and through union action, Flaming adds.

“We’ve had employees tell us they’ve been spit on, they’ve been sworn at. Companies have made billions of dollars in profits in the past 21 months with the pandemic, and that needs to be shared with the workers,” Kevin Schneider, a representative of UFCW Local 7, said before the strike vote.

The strike is set to begin January 12.

In Portland, Oregon, a strike of 7,000 Kroger workers lasted one day just before Christmas. They won a $15 an hour starting wage and raises for other worker categories, plus a system for regular pay bumps.

(Bobbi Murray has reported on politics, economics, police reform and health-care issues for Los Angeles magazine, L.A. Weekly and The Nation. This article was featured in Capital & Main.)