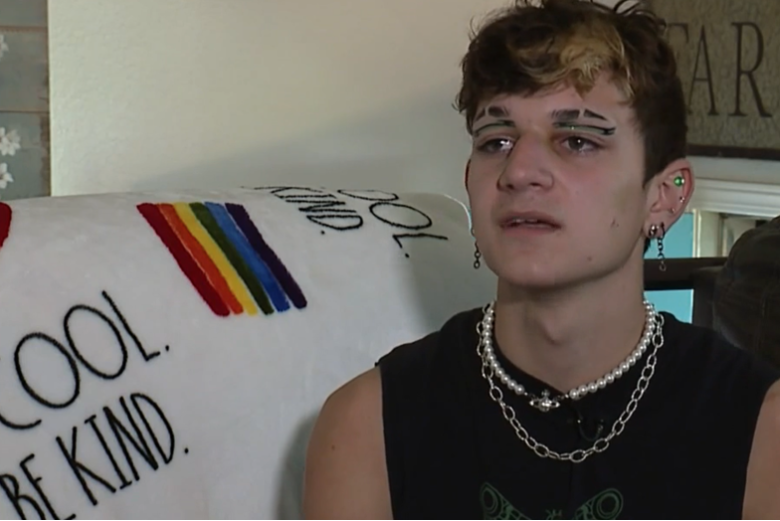 LGBTQ NATION - Over a hundred students held a walk out at a high school in Missouri in support of a gay student who has faced constant bullying and violence this year at school.

Parents and students who talked to the Kansas City Star said that administrators and staff at Lee’s Summit High School in Kansas City haven’t done much to help Danny Lillis, a gay senior who has been the target of bullies for his sexual orientation.

Related: Students stage massive walk-out after a trans girl was blocked from the locker room

“The school dropped the ball,” said Melanie Davies, the mother of a friend of Lillis. “They have given them a hard time for Danny being gay, for him wearing makeup to school, for him expressing himself.”

Lillis said that another group of students regularly shout slurs and hateful remarks at him. He has had other students throw food at him. He said that they target him because they have a problem with his sexuality and how he doesn’t present as stereotypically masculine, wearing make up and earrings.

He said he has reported the harassment multiple times to administrators, even crying sometimes and telling them “I don’t feel safe” at school.

“And nothing changed,” Lillis said.

The violence ramped up last week, when the same students bullied Lillis again. Davies’s daughter couldn’t stand it anymore and yelled at one of the boys who bullied her friend.

Davies said that her daughter, Lillis, and a third friend turned around to find other bullies behind them. The bullies shoved Davies’s daughter. She shoved the bully back, and the bully “punched her right in the face.”

“No teachers were around,” Davies said. “Students broke it up.”

She added that the school didn’t even inform her about the fight, which caused her daughter to throw up twice before she had to be taken to the emergency room that night for a broken nose and other injuries.

Even worse, the school decided to punish all the students with a five-day suspension, including Lillis and Davies’s daughter.

So students who were frustrated by the school’s alleged anti-LGBTQ stance organized a walkout yesterday.

“We decided to do the walk out today to basically show movement towards our school and administration for the lack of action toward these repeated and multiple events that have been happening to me and my friends,” Lillis told KSHB.

“I’m terrified to step another foot in that school. To walk into a building where someone had just punched my friend and broke her nose due to this whole situation.”

Students held signs that said “Be kind” and “Stop bullies” and waved Pride flags outside the school as cars drove by.

The school’s alleged actions also led to a Change.org petition entitled “LGBTQ+ safety at Lee’s Summit High School,” which currently has 2800 signatures. It says that the administration knew about the bullying and did nothing to stop it.

The petition calls on the school to remove the suspension from Lillis’s and Davies’s daughter’s records, investigate the anti-gay bullying, apologize “for inflecting fear in all LSHS LGBTQ+ students,” and enforce their “zero tolerance” policy on bullying.

“We support our students’ right to express their voice peacefully and are communicating with students about the best ways we can support them,” the school district said in a statement. The district “is committed to supporting and working together with students to address their concerns with fairness, dignity, and respect.”

(Alex Bollinger has been working in LGBTQ media for over a decade and has a Masters degree from the Paris School of Economics. He lives in Paris with his partner. Follow @alexpbollinger on Twitter.)