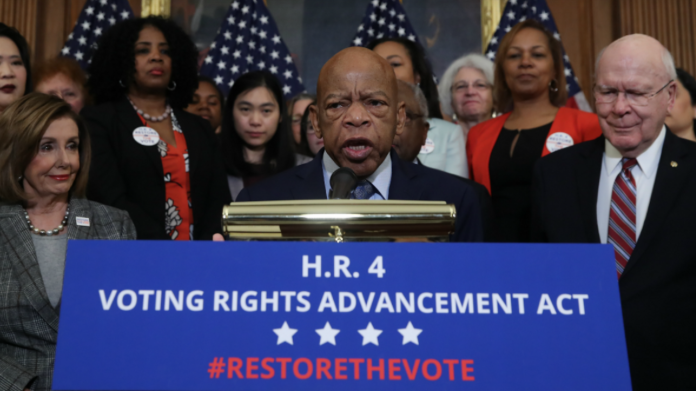 In August, the House passed its version of this critical bill to shield American voters from racial discrimination at the ballot box. The goal of the legislation is to restore the Voting Rights Act of 1965 to its full protective glory. Right now, that landmark law's effectiveness has been undermined by two Supreme Court decisions.

The Senate now must do what the House already has—pass the bill. And once it clears Congress, President Biden should sign it immediately.

In 2013, the Court gutted the law's most powerful provision. Under Section 5, jurisdictions with a history of racial discrimination in voting had to get federal approval, or preclearance, before implementing changes to their voting policies. In Shelby County v. Holder, a majority of the Court said that the criteria for determining which jurisdictions engaged in discriminatory voting practices was outdated and didn't reflect the racial progress the country had made. Immediately afterward, jurisdictions once covered under preclearance started to aggressively implement new restrictive voting policies.

Then this summer, the Court also made it harder to challenge discriminatory voting laws under Section 2 of the Voting Rights Act. The majority did this by setting aside decades of precedent. Rather than examining the way that centuries of discrimination interact with a particular voting policy to produce discrimination at the ballot box (as courts have done for decades), the Supreme Court instead created new "guideposts" to determine if discrimination was serious enough for judges to get involved. These guideposts are skewed in a way that makes it much harder for courts to root out voting discrimination, chalking up real burdens to "mere inconveniences."

Despite these disastrous rulings, the Court in both instances said Congress could update and clarify Section 5 and Section 2 to root out race discrimination in voting. That's exactly what the John Lewis Voting Rights Act does, and it couldn't come at a more pivotal time.

This week, we updated our list of states that have enacted voting restrictions over the last year. At least 19 states have passed 33 laws in 2021 that make it harder to vote. Before Shelby, some of these states—Georgia and Texas, for example—had to clear their changes with the Justice Department or a federal judge before putting them into practice. These laws are on top of laws enacted since the Shelby decision that create layers upon layers of voting restrictions, many of which probably wouldn't have survived preclearance. These barriers once again add up to what President Lyndon Johnson described as "ingenious discrimination" when he called on Congress to pass the Voting Rights Act of 1965.

The John Lewis Voting Rights Act is crafted to put an end to this nonsense. First, the new preclearance formula only targets jurisdictions with a current, persistent, and pervasive history of racial discrimination in voting proven by repeated violations of federal law. Second, by strengthening Section 2, the bill restores the ability of voters to challenge racially discriminatory voting practices in jurisdictions not covered by the new preclearance formula.

When the Shelby ruling came down, the late great Justice Ruth Bader Ginsburg famously wrote in dissent: "Throwing out preclearance when it has worked and is continuing to work to stop discriminatory changes is like throwing away your umbrella in a rainstorm because you are not getting wet." With the John Lewis Voting Rights Act, Congress has written legislation that gives the courts an improved tool to help protect voters of color from the deluge of voter suppression laws that are now commonplace across the country.

The Senate now must do what the House already has—pass the bill. And once it clears Congress, President Biden should sign it immediately. Otherwise, our election rules will once again make a mockery of our democracy's most sacred promise: one person, one vote.

(Michael Waldman is President of the Brennan Center for Justice at NYU School of Law, a nonpartisan law and policy institute that focuses on improving the systems of democracy and justice, and a contributor to CommonDreams.org.)