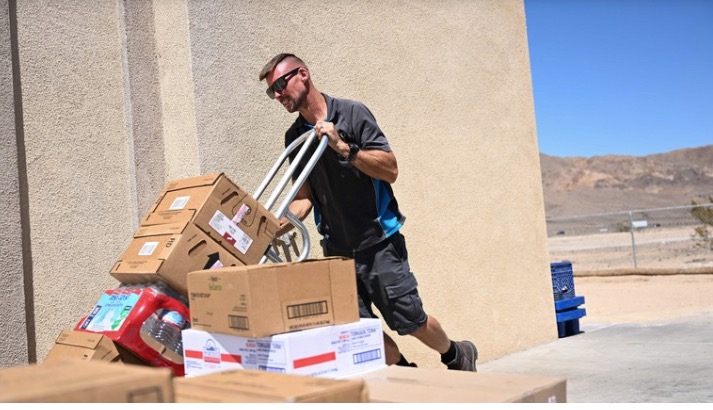 It's been a hell of a hot summer, exploding the top off thermometers with deadly, triple-digit readings across the country, including in far northern regions that've almost never seen such extremes. As we're learning, week after week of debilitating heat intensifies wildfires, causes electric grids to fail, kills millions of wild animals (including fish), burns up crops and concentrates toxic air.

But there's another impact that draws little notice: Heat kills workers. Indeed, those searing days of 95-100-110 degrees kill and injure more U.S. workers each year than all the floods, hurricanes and tornadoes combined. Those toiling outdoors — including farmworkers, roofers and carpenters, airport ground crews, landscapers, road and street repairers, letter carriers and trash collectors — are in the direct line of fire for this invisible, insidious killer. But indoors is no better if there's no AC, for sprawling warehouse and manufacturing plants made of metal and stone become ovens.

Then, welcome to climate change: 20 of the last 21 years gave us the hottest temperatures on record. Unsurprisingly, the yearly number of worker heat deaths in that period doubled. Also, researchers have determined that extreme workplace heat is causing about 170,000 people a year to suffer injuries on the job.

The impact of heat is poorly understood, even by workers. Sudden heatstroke is not the only worry, for rising body temperatures can quickly fuzz the mind, weaken muscles and numb concentration. So, workers fall; their hands get caught in machinery; they touch the wrong wire; they get hit by a front-end loader.

Sitting in climate-controlled executive suites, distant legislative chambers and comfortable editorial offices, America's power elites literally don't feel the intensity of this heat, so the richest country in the history of the world continues to subject millions of its people to senseless suffering and death, not even talking about this embarrassment, much less stopping it.

America's corporate acolytes and right-wing moralists preach that an uncomplaining, nose-to-the-grindstone work ethic is what gives dignity to laboring stiffs.

Of course, that's "dignity" as defined and controlled by corporate elites, not by workers, and the reward for it frequently includes on-the-job injuries... and death. Not that CEOs and well-heeled investors intentionally sicken, maim and kill thousands of laborers every year — but they certainly do put them in positions for such unhappy results. For example, they require that farmworkers spend hours picking crops on 105-degree California days, or that construction crews toil in the muggy, dog days of Florida summers tarring the roofs of condos. Low-paid, powerless workers die, but no one in the corporate hierarchy did the deed: heat was the killer.

But wait, not only are aloof bosses back at air-cooled headquarters the ones who knowingly subject subordinates to that deadly heat, but they're also the ones who hire squads of lobbyists and lawyers to kill regulations that could prevent these deaths. After all, solutions are not exactly high tech or even expensive: Require ample water at the work sites; ensure paid rest breaks in cool spaces; train on-site managers and employees to detect and react to signs of heat stress; require good ventilation and proper clothing; establish emergency response procedures; foster a safety-first environment; and impose serious punishments for violators.

Such sensible steps have repeatedly been proposed as official workplace policy for at least the last 50 years — but intense industry opposition has killed the adoption of any such standards of prevention. Instead, the U.S. "protects" workers with a "voluntary awareness campaign" that essentially consists of posters urging employees to beware of heat, saying to them, "Goodbye and good luck."

But at last, a real proposal has been put on the table by more than 110 grassroots groups. See it — and join it — by contacting Public Citizen: Citizen.org.

(Jim Hightower is a national radio commentator, writer, public speaker, and author of the books "Swim Against The Current: Even A Dead Fish Can Go With The Flow"(2008) and "There's Nothing in the Middle of the Road But Yellow Stripes and Dead Armadillos: A Work of Political Subversion" (1998). Hightower has spent three decades battling the Powers That Be on behalf of the Powers That Ought To Be - consumers, working families, environmentalists, small businesses, and just-plain-folks. This article was featured in CommonDreams.org.)