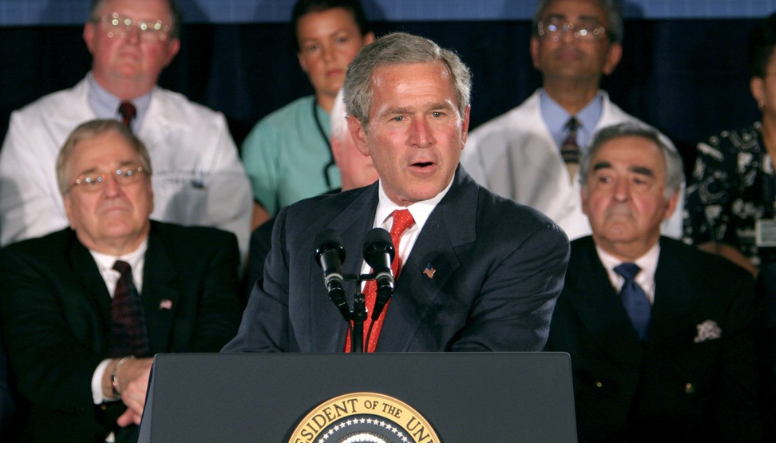 HEALTH INSURANCE - In 2003, George W Bush set up the destruction and privatization of Medicare.

The end of "real Medicare" is getting closer every day, and Congress and Medicare's administrators are doing nothing.

Last Friday the Centers for Medicare Services (CMS) announced a 14.5% increase in Medicare Part B premiums, raising the monthly payments by the lowest-income Medicare recipients from $148.50 a month to $170.10 a month next year.

Congress must stop these for-profit parasites who are steadily draining "real" Medicare of funds and resources while producing billions in profits and often outright stolen funds for the insurance industry.

If you're trying to live on the bottom rung of Social Security (about $365/month), that's consequential. People with Medigap policies are also seeing their policy price rises announced this month.

Two months ago I wrote about the Medicare Advantage Scam and how it can screw consumers. This price hike, though, raises the larger issue of what's happening to Medicare itself and whether the entire system may be out of business in a few years, in part because our government is being robbed blind by all these so-called "Advantage" plans.

It all began with George W. Bush, who'd spent most of his life openly and proudly campaigning to privatize Medicare and Social Security.

In 2003 Congress and the Bush administration rolled out a privatization option, allowing private for-profit insurance companies to sell policies branded as "Medicare Advantage" to gullible seniors who think they're buying the actual Medicare Parts A and B. As a result, today companies eager to rip off seniors are flooding the market, particularly with TV advertising.

As I note in considerable detail in The Hidden History of American Healthcare: Why Sickness Bankrupts You and Makes Others Insanely Rich, Medicare Advantage is hurting traditional Medicare, because that system is paying the insurance companies, in most cases, far more than it would be paying to simply cover the costs of its regular Medicare recipients.

Medicare Advantage is also one of the most effective ways that insurance companies can kill a real "Medicare for All" system, since so many people who think they're on Medicare are actually on these privatized plans instead.

Nearly from its beginning, Medicare allowed private companies to offer plans that essentially compete with it, but they were an obscure corner of the market and didn't really take off until the Bush administration and Congress rolled out the Medicare Modernization Act of 2003.

This was the GOP's (and a few corporate-owned Democrats') big chance to finally privatize Medicare, albeit one customer at a time.

That law legalized a brand known as "Medicare Advantage" under the Medicare Part C provision and a year later it phased in what are known as risk-adjusted large-batch payments to insurance companies offering Advantage plans.

Medicare Advantage plans are not government-provided Medicare. They're private health insurance most often offered by the big for-profit insurance companies (although some nonprofits participate, particularly the larger HMOs), and the rules they must live by are considerably looser than those for Medicare.

Even more consequential, they don't get reimbursed directly on a person-by-person, procedure-by-procedure basis. Instead, every year, Advantage providers submit a bill to the federal government based on the aggregate risk score of all their customers and, practically speaking, are paid in a massive lump sum for all of their customers.

The higher their risk score, the larger the payment. Profit-seeking insurance companies, being the predators that they are, have found a number of ways to raise their risk scores without raising their expenses.

For example, many Medicare Advantage plans promote an "annual home visit" by a nurse or physician's assistant as a "benefit" of the plan. What the companies are doing, though, is trying to upcode (raise their payments from Medicare) customers to make them seem sicker than they are.

"Heart failure," for example, can be a severe and expensive condition to treat . . . or a barely perceptible tic on an EKG that represents little or no threat to a person for years or even decades. Depression is similarly variable; if it lasts less than two weeks, there's no reimbursement; if it lasts longer than two weeks, it's called a "major depressive episode" and rapidly jacks up a risk score — and thus the payments to the insurance company, even if it provides no services.

The home health visits are so profitable that an entire industry has sprung up of companies that send nurses out on behalf of the smaller insurance companies.

In summer 2014, the Center for Public Integrity (CPI) published an in-depth investigative report titled Why Medicare Advantage Costs Taxpayers Billions More Than It Should.

They found, among other things, that one of the most common scams companies were running involved that very scoring of their customers as being sicker than they actually were, so that their reimbursements were way above the cost of caring for those people.

Here are a few quotes and summaries (in my words) from the report:

Companies are almost never nailed for these overcharges, and when they are, they usually pay back pennies on the dollar.

For example, when the Office of Inspector General, Health and Human Services (which oversees Medicare), audited six out of the hundreds of plans on the market in 2007, they found that just those six companies "had been overpaid by an estimated $650 million" for that one year. As the Center for Public Integrity states, "CMS settled five of the six audits for a total repayment of just over $1.3 million."

The Centers for Medicare and Medicaid Services also, in 2012, decided to audit only 30 plans a year going forward. As CPI noted, "At that rate, it would take CMS more than 15 years to review the hundreds of Medicare Advantage contracts now in force." And that's 15 years to audit just one year's activity!

"The recent HHS Payment Accuracy Report exposes that taxpayers have overpaid Medicare Advantage plans more than $30 billion dollars over the last three years," Brown wrote, wanting to know if the government was going to try to recover any of that essentially stolen money.

Meanwhile, during the four years of the Trump administration, CMS went out of their way to illegally promote Medicare Advantage plans.

A February 2020 report in the New York Times stated, "Under President Trump, some critics contend, the Centers for Medicare and Medicaid Services, which administers Medicare, has become a cheerleader for Advantage plans at the expense of original Medicare."

The National Bureau of Economic Research (NBER) compared Medicare Advantage with traditional Medicare and found the Advantage programs to be mind-bogglingly profitable: "MA insurer revenues are 30 percent higher than their healthcare spending. Healthcare spending for enrollees in MA is 25 percent lower than for enrollees in [traditional Medicare] in the same county and [with the same] risk score."

In other words, they are paid more and deliver less, keeping the balance as their profit. And it is hundreds of billions of dollars.

Today the industry is so entrenched and massively profitable it can buy off members of Congress with the loose change it finds in the couch.

Meanwhile, changes CMS made to the Medicare website during the Trump administration now direct people who want to sign up for Medicare, instead, to a page to sign up for private Medicare Advantage plans.

If they can move more than half of Americans off traditional Medicare and onto these corporate plans, it'll provide the political cover to kill off Medicare altogether—and they're nearly there right now.

While much of the media focus on Medicare's price increase has been around a single Alzheimer's drug, the simple reality is that without the Medicare Advantage scam the Medicare system would be in great shape right now.

Congress must stop these for-profit parasites who are steadily draining "real" Medicare of funds and resources while producing billions in profits and often outright stolen funds for the insurance industry.

(This article was first published on the Hartmann Report and also featured in Common Dreams.  Thom Hartmann is a talk-show host and the author of "The Hidden History of Monopolies: How Big Business Destroyed the American Dream" (2020); "The Hidden History of the Supreme Court and the Betrayal of America" (2019); and more than 25 other books in print. )