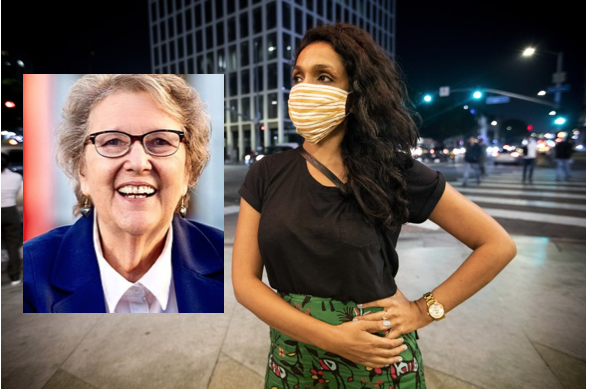 DEEGAN ON LA—Facing a fate worse than a recall—redistricting—beleaguered Councilmember Nithya Raman (CD4) unexpectedly called an audible and brought onto the field a bonafide heavy hitter, someone capable of delivering a home run, to represent her at the soon-to-wrap-up redistricting hearings.

Jackie Goldberg, coming in off the bench for the final inning, is a well-known and politically experienced Progressive. Her brain now has to become Raman’s gun in an increasingly contentious, all knives out, conversation about what to do with Raman’s current CD4 district.

At risk is lots of Raman’s territory being absorbed into other council districts, leaving Raman with a mostly brand-new playing field. Raman, herself, pegs it at a 75% loss of territory. That deficit would be balanced by an equivalent gain in neighborhoods where she would be a newcomer to them.

Her supporters growl that they are being disenfranchised. In their rabidity, they conveniently set aside the election campaign by Raman who ran as “Nithya for the City” not “Nithya for CD4”, or Nithya for “them”. “She ran a campaign as if she was running for mayor,”  said Sherman Oaks Homeowners Association President Richard Close in a recent New York Times examination of Raman.

It should not matter what Raman’s district looks like as long as she has a voice on city matters overall. Her supporters may not know that, in one of many redistricting examples, long-tenured council member Ruth Galanter was famously redistricted lock, stock and barrel from the westside to the valley.

The metric to measure Goldberg by will be the final percentage loss of the current CD4 that Raman will suffer. Can Goldberg triage the 75% projected loss and reduce it by compromising, like King Solomon and the disputed baby, to 50% by giving the commission half of what they want and Raman half of what she wants?

The dramatic “Hail Mary” play of replacing incumbent commissioner Alexandra Suh, in the job since January, with veteran, multi-dimensional politico Jackie Goldberg comes not a moment too soon, as the commission’s clock clicks down to the conclusion of hearings and it gets ready to submit a final redistricting map to the City Council. Public hearings on map submissions are now over, with the commission scheduled to adopt a final map on Thursday, October 21.

While tardy, it’s probably one of the best and smartest personnel choices Raman has made on a staff that has had an outsized churn rate in her first several months in office. She was elected last November and has continually “reorganized” her staff. A Google search of “Raman staff” shows multiple iterations of staff configurations over just a few months.

This time, though, she came up with a solid winner. Goldberg, currently a school board member (as she was in the late 1980’s), has herself been a city council member (representing CD13), and has served as a state legislator in the California State Assembly.

Raman will not be recalled—-the organizers dropped that effort—-but she will almost certainly be somewhat redistricted. It’s now up to Jackie Goldberg to hope that her arrival is not too late in the game to make the best deal possible for Raman with the commissioners.