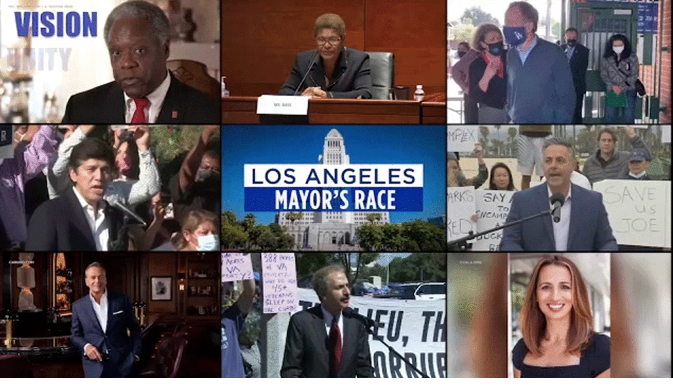 EASTSIDER - What pledge, you say? One that costs nothing and will significantly improve the viability of the entire Neighborhood Council system, that’s what.

A Background of Failure

Eric Garcetti was Mayor from 2013-2022, and provably was uninterested in having anyone or any institution holding his feet to the fire and fact checking policies. So during this term, his press comments were nice mealymouth nothings about how wonderful the Neighborhood Council system was, even as he appointed General Managers and Board of Neighborhood Council Commissioners who simply backed the various General Managers as they co-opted the whole system.

I have a modest proposal. Pin every candidate for Mayor down on where they really stand on DONE and BONC. Ask them to promise that if elected Mayor they will replace the current DONE General Manager with an appointee who will actually support the NC System, instead of systematically suppressing them.

Think about it. Both the General Manager and the BONC Commissioners are appointed by and serve at the pleasure of -- the Mayor!

It’s simple. Everywhere they campaign, ask candidates if they will take the pledge to replace these people. Yes or No. Costs them nothing, but it could actually result in Neighborhood Councils running kosher elections, getting support instead of suppression from DONE and staff, and appointing a BONC who would act as referee between Neighborhood Councils and DONE, instead of telling them what they can and cannot say, as if they lose their Constitutional Free Speech rights if they are successful in becoming an advisory member of a NC Board.

Let’s be honest. The Neighborhood Council system was designed to have robust Neighborhood Councils all over LA so that they could debate issues and advise the elected officials over issues important to their stakeholders. To do that, you need open public in person meetings.

The COVID-19 virus changed all that. In the case of the City Council, what the heck. They always vote 15-0 on items that they have worked out in secret anyhow.  But the Neighborhood Councils were designed to represent all the stakeholders in Los Angeles. Homeowners, renters, homeless (yes homeless), in fact everyone with an interest in the current 98 Neighborhood Councils, whomever they may be.

You can’t really have a back and forth over Zoom or with other electronic remote video solutions. It’s great for folks who want to hide things and suppress real comment, like elected officials and the various City Departments, since they control the communication medium.

However, I don’t really care how the Council and Departments meet -- it doesn’t seem to make much difference. But to actually hear from all the stakeholders in a Neighborhood Council, which is the entire reason they exist, is a very different deal.

If you think about it, the NC system was designed to be the open, rowdy real democracy that is inherently suppressed by governmental agencies and the politicians who work behind the scenes to subvert them.

I wrote a CityWatch article about all this back in May:

“They had DONE shut the Councils down for a few months, while they waited for guidance from the mothership. So now that the virus threat is basically over, how long are we going to have to wait to do what Neighborhood Councils desperately need – have meetings that are public and in the flesh?

“Face it, unless you are the ones in charge, Zoom meetings suck. All the life is vacuumed out of the dynamics of people meeting people, interacting, having a back and forth with the Boards, and getting a lot of the communities involved.

“If you’re DONE or BONC, on the other hand, Zoom is cool. No getting pinned down on policies or issues, total control, never get back to anyone, sanitize the minutes, and create the mother of all top-down bureaucracies right in front of the governed (aka the stakeholders).

“Not to mention avoiding the impact of 50-100 stakeholders showing up and jamming a NC meeting over some incomprehensible BS the Council and/or BONC is shoving down the throats of the governed.

“Zoom also amplifies the power of the petty bureaucrat (or elected official, for that matter). Don’t like some pesky stakeholder? Don’t recognize them. Love your supporters? Let them drone on and on. Ah, the sweet elixir of control!

“If all of the staff at DONE started the transition to restarting in person meetings for the 99 Neighborhood Councils right now, it would probably take them months, not weeks, to get back to ‘allowing’ each Council to meet in person -- you know, what the Charter envisioned. It’s the only way that LA City stakeholders can even try to hold the elected officials’ (including DONE, by the way) feet to the fire. Want to guess on the odds?”

Let’s face it. Burrowing bureaucrat that she is, GM Raquel Beltran has used the pandemic to turn the NC system on its head and transform it into an authoritarian top down institution. And she has created a BONC which serves as her tool to do as she wants.

Anyhow, why should a potential Mayor refuse to bring in new blood as General Manager of DONE, or appoint new BONC Commissioners? Hell, they get to appoint every single Board and Commission until someone gets around to changing the LA City Charter.

If they won’t commit, look out for an Eric Garcetti lite in practice. If any will take the pledge, get behind those who are willing to step into the future.

So back to my modest proposal. Pin every candidate for Mayor down on where they really stand on DONE and BONC. Ask them to promise that if elected Mayor they will replace the current DONE General Manager with an appointee who will actually support the NC System, instead of systematically suppressing them

(Tony Butka is an Eastside community activist, who has served on a neighborhood council, has a background in government and is a contributor to CityWatch.) Image: ABC7. Edited for CityWatch by Linda Abrams.