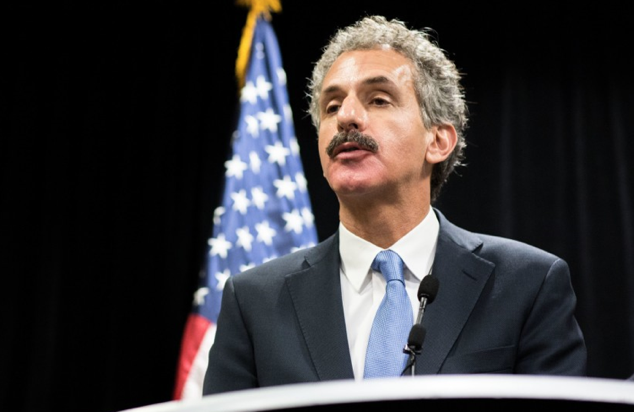 Letters received from the state bar and sources confirmed by journalist Justin Kloczko show that Los Angeles City Attorney Mike Feuer is under investigation by the state bar for his role in the DWP billing scandal.

Consumer Watchdog received a redacted copy of a May 11, 2021 letter on state bar letterhead addressed to the author of the original complaint (name whited out) that reflects a case numbered 190-0-13014 pending against Michael Nelson Feuer. Other letters received by and conversations with Kloczko confirm the investigation.

The now-former chief deputy, Jim Clark, is also under state bar investigation as is Paul Kiesel, an outside attorney hired by the City Attorney.

Feuer’s office refused to confirm or deny whether or not there was a bar investigation.

“The public has a right to know if the City Attorney, who is also running for Mayor, is under state bar investigation for unethical conduct,” said Jamie Court, president of Consumer Watchdog.  “The City Council should demand that Feuer make the status of the bar investigation public. The City Attorney works for the council and the public and we have a right to know.”

The May 11th letter predated the public release of the Special Master’s report in the DWP case. That report dissects the anatomy of the unethical and collusive conduct by the attorneys in the case.

The Special Master, Ed Robbins, was appointed by the judge presiding over the billing scandal case to summarize that misconduct and the report delivers a huge punch, claiming that the attorneys involved violated their ethical duties as attorneys.

The 595-page Special Master’s report couldn’t determine Feuer’s responsibility because notes kept by the chief deputy on Feuer’s briefing on the issue were destroyed.  Feuer famously claimed “I do not recall” over sixty times when deposed on the matter.

The DWP scandal has resulted in an FBI raid on the City Attorney’s Office and DWP, resignations of top City attorneys and DWP officials and a $2.5 million sanction by the judge.

Attorneys hired by the City Attorney’s Office engaged in a sham lawsuit and settlement against their own client, DWP, in a fraud on the court -- what is called a  “reverse auction.”  A legitimate class action against the City over billing fraud was replaced with a phony case so that the City could hide problems with DWP and settle the case on the cheap.  In essence, the City controlled both sides of the case, without disclosing this to the Court, and settled on its own terms with a huge payday for the crooked lawyers who were colluding with the city attorneys.

The state bar, which passed multiple times on investigations of disgraced LA trial lawyer Tom Girardi, has an added obligation to do a thorough investigation, said Court. Only the state bar can get answers about what Feuer knew and didn’t know, he said, because an investigation into failures in Feuer’s ethical duties associated with his license is one area where he cannot claim “I don’t recall” and get away with it.

“Feuer owes the bar and public candid answers if he wants to continue as a public official,” said Court.

Consumer Watchdog said that questions the state bar needs to ask and have Feuer answer include:

1) Why did his chief deputy Jim Clark change his deposition testimony via errata to claim he didn’t remember briefing Feuer on the issue when he testified previously that he had? (The Special Master’s report notes: “The evidence supports a finding that the City directed and assisted in the City suing itself with a sham lawsuit. Evidence of collusion includes: Mr. Clark’s truthful February 2019 PMQ deposition testimony he changed to untruthful statements through an errata sheet after other LACA attorneys and Outside Counsel convinced him to do so.”)

2) Did Feuer discuss Clark’s testimony with him and ask him to change his testimony?

3) What steps did Feuer take to oversee the outside counsels in the DWP case?

4) When did Feuer learn of the fraud on the court and what steps did he take when he learned about it?

5) Why did Feuer commission a sham investigation and report at taxpayer expense that dismissed and misrepresented many of the ethical issues raised by the Special Counsel’s report?

According to the Special Master's report: "The Special Master’s ability to reach a firm conclusion about the extent of Mr.Feuer’s knowledge or participation in Jones v. City was hampered by the lack of evidence, which arguably was a direct result of the fact that Mr. Clark was tasked by Mr. Feuer with overseeing the ratepayer class actions, which included the Jones v. City case. Mr. Clark who was the principal person who would apprise Mr. Feuer of activities in the ratepayer cases testified that he destroyed and/or kept no notes of his briefings of Mr. Feuer about 'significant' matters and did not recall if he spoke about the Jones settlement with Mr. Feuer. At his deposition, Mr. Feuer confirmed the lack of a paper trail on his discussions with Mr. Clark and testified that he had little or no recollection regarding the details of his knowledge of the Jones cases."

(Consumer Watchdog's President and Chairman of the Board, Jamie Court,  is an award-winning and nationally recognized consumer advocate.  Capitol Weekly, naming Jamie to its  "Top 100" list of unelected movers and shakers in California politics, wrote, "Court has made a career of battling all comers in the interest of the public, and his take-no-prisoners approach has earned him plenty of enemies."  Consumer Watchdog.org)