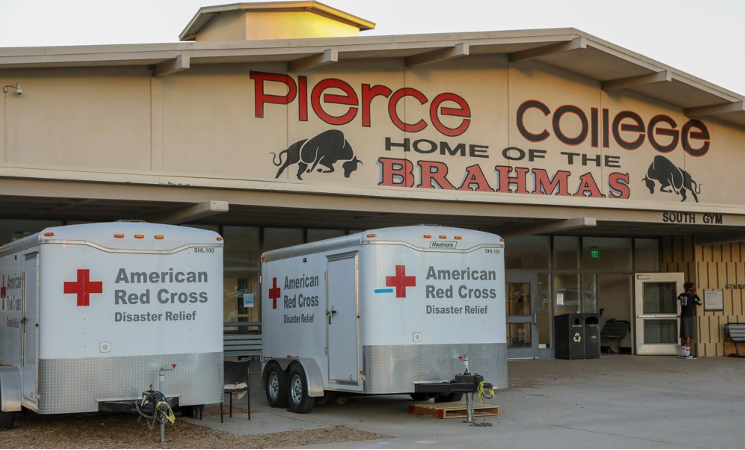 NEIGHBORHOOD POLITICS - As I think about what a Community of Interest is, I think about how we behave as community in times of troubles.

Right now, we are in the middle of a pandemic. Various groups of different ethnicities have been a source of help or information for their communities. Religious leaders have been there for comfort, food, and for vaccine information and assistance in outreach to members of their community on where to get vaccinated.

For my community of West Hills, I think about two other disasters. The most recent – the Woolsey Fire. The fire started at the Santa Susana Field Laboratory due west of West Hills.

Residents of West Hills just two miles west of me were asked to evacuate. Residents of Chatsworth, Lake Manor, and Woodland Hills, along with residents of Bell Canyon, Calabasas, and further south had to leave their homes.

Many people relocated to our hotels in Warner Center. The American Red Cross designated Los Angeles Pierce College (photo above) as an evacuation center for the Woolsey and the Hill fires which were going on at the same time. This is an article regarding that time from the Sundial – a California State University/Northridge publication.

Pierce College was not only a shelter for humans but also for large domestic animals like horses.

Another disaster we seem to forget: the 1994 Northridge Earthquake 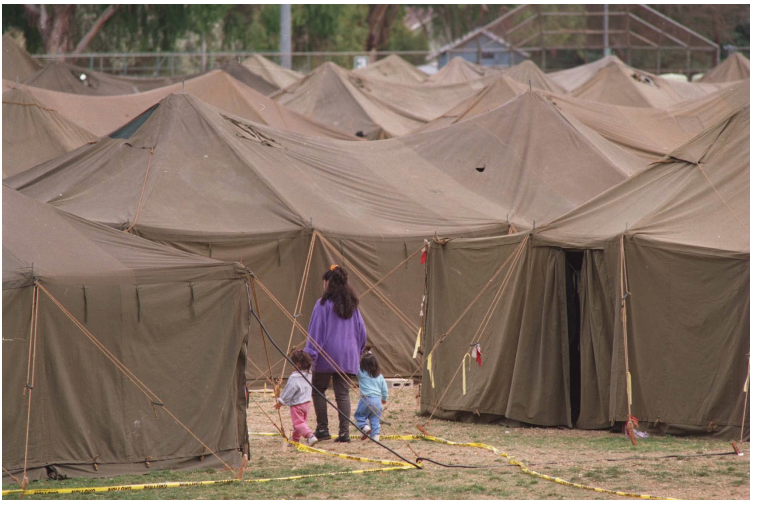 “A woman leads two children through a maze of tents set up by the National Guard for displaced quake victims at Lanark Park. The Northridge quake hit at 4:31 the morning of Jan. 17, 1994. (Photo by Michael Owen Baker, Los Angeles Daily News/SCNG)”

On the morning of the 1994 earthquake, my home was structurally damaged. My family and I would leave that afternoon for about eight months. We moved to the west – to Thousand Oaks in a hotel, until we were able to rent a home closer to home.

Some people were less fortunate. The photo above shows a woman at Lanark Park in Canoga Park with her children in a tent city set up by the National Guard.

I am also aware, that local residents also moved that day to Shadow Ranch Park in West Hills. I am not sure what services they got there.

On Monday, September 27, 2021, the Los Angeles City Council Redistricting Commission met for more than six hours with only about two 10-minute breaks. I was on this ZOOM call on my computer. On Sunday, we were sent a packet with three sets of new maps to consider for public comment. Those were maps I, J, and K.

But on Monday at 4:00 p.m. when we began attending the meeting with these maps in hand, we were told that there was only one map to comment on that had been prepared that Sunday by the Redistricting Director, Staff, and their Redistricting Partners – “Map K Corrected.”

That map was presented to the community and the Commissioners via ZOOM by Redistricting Director Fred Cardenas. After that presentation, the meeting was opened up for about 75 minutes of Public Comment of one minute per person. Then discussion began to change Map K Corrected. Towards the end of the meeting, Commissioner Alexandra Suh referenced a second map that she thought that the Commission should consider at their next meeting, on Thursday, September 30, 2021, at 5:00 p.m. The map that Commissioner Suh referenced was created and submitted by a member of the public – she referenced Map 54277.

Later that evening, it was agreed upon by the Commissioners that Map 54277 would be worked on by Redistricting Partners, and it would be ready on Thursday as map L. From these two maps – “Map K Corrected” is now updated and named Draft Map K 2. On Thursday, from Draft Map K 2 and Draft Map L – the Redistricting Commission will be creating one Final Draft map based on public testimony. The Commissioners will then hold four meetings in October to address the Final Draft Map.

Members of the Redistricting Commission go out of their way to consider Federal laws related to discrimination and therefore, they consider the interests of minority groups in drawing these maps. A great deal of attention is paid to the communities based on Hispanic, Asian, and Black majority communities as well as to Koreatown, Thai Town, areas that are Filipino, as well as to communities that are Orthodox Jewish communities.

Other areas the get special consideration are historic areas like Hollywood and areas that are considered economic drivers like Universal Studios and similar industry areas in the eastern San Fernando Valley to Hollywood, as well as economic engines including Exposition Park, USC, as well as economic assets downtown. 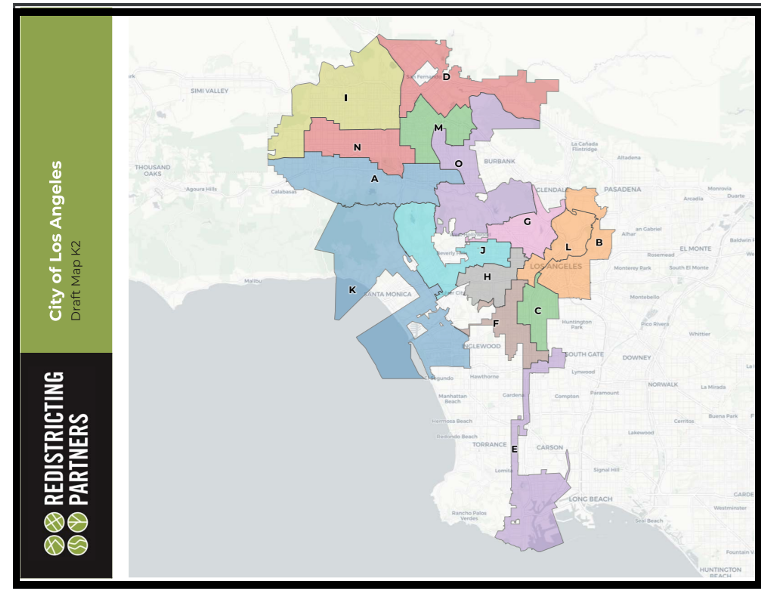 This is the current Draft Plan K2 map for the City of Los Angeles. In this map, you can see that the San Fernando Valley maps begin with a west to east southern boundary map called A that extends from Woodland Hills to an unidentified area south of Valley Glen (see map A in the packet).

A second district is drawn parallel to this district to the north. This appears to be drawn as a predominantly Hispanic and other mixed ethnicity district. That district appears as N in the map packet above. It begins with Canoga Park on the west, and it continues east into Van Nuys from what I can tell by their map. There are no clear streets identified on these maps. 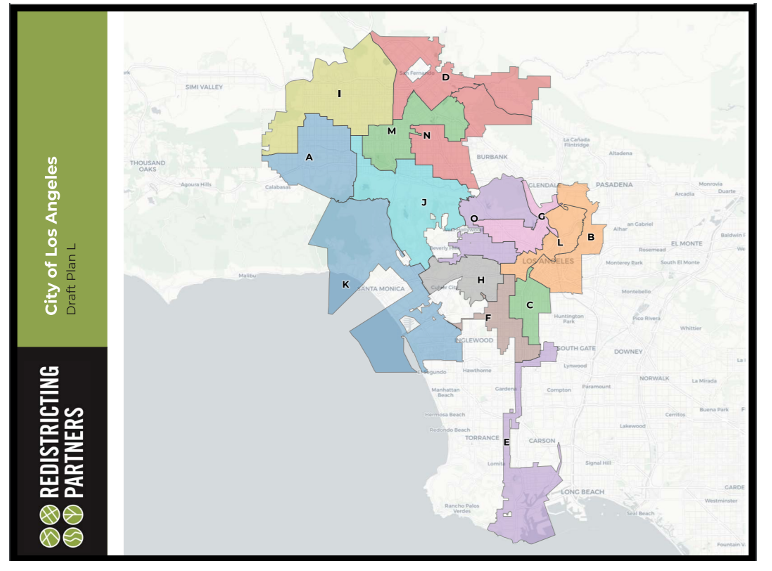 Draft Plan L is created from map 54277 and updated by Redistricting Partners. In this map, the southwest corner begins to the west with Woodland Hills. It is shown as Map A in blue. In this configuration, Map A contains Woodland Hills, Warner Center, Canoga Park, Winnetka, and what is unclear is – parts of Tarzana and parts of Reseda?

Draw your own maps

Residents or community members are given access to redistricting software on this link.

On Sunday September 26, I printed the maps submitted by their place on this website called “Shared Maps.”

My most current map submission 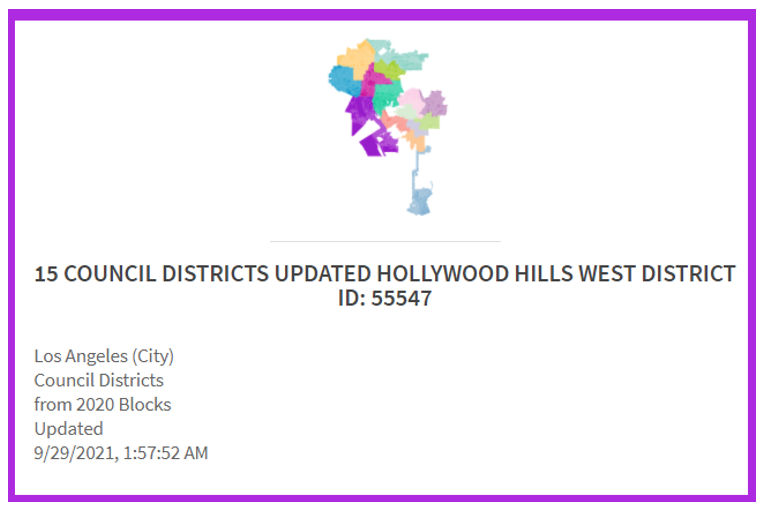 The link to this map is here.

This is the Map 55477 that I drew showing the Neighborhood Council boundaries.

This is my map 55477 by Race which is one of the tabs on the Redistricting software. It enables the commissioners to see – not only the Neighborhood Council boundaries, but also which districts I have created may have a minority population over 50%.

On this map the legend is as follows: 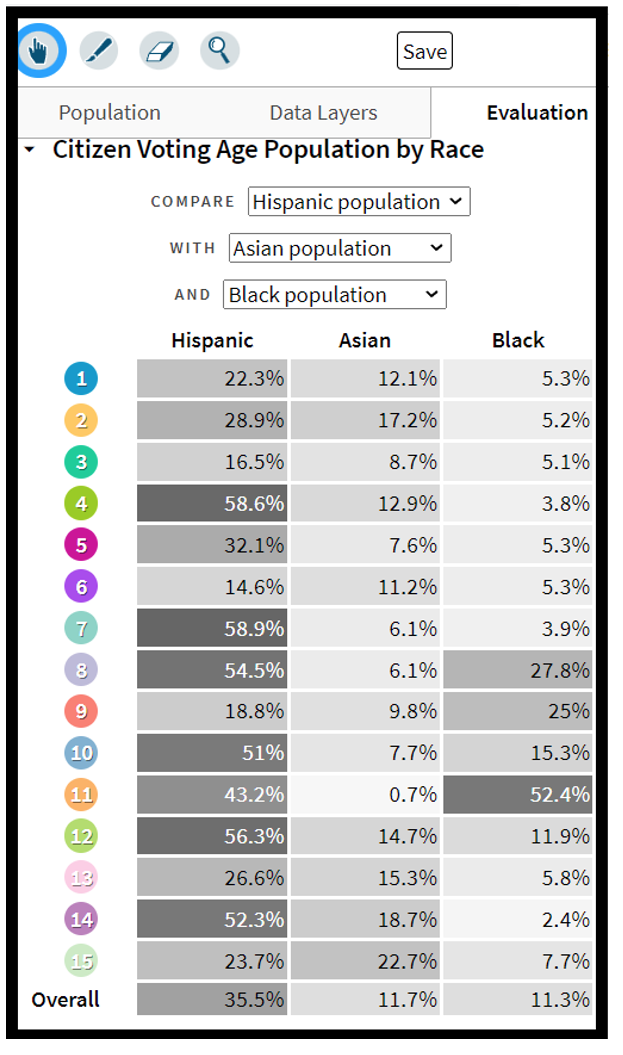 This legend above indicates that the map that I drew shows the districts as numbered above (not Council District numbers) have a greater than 50 % population that is Hispanic:

Map #s 4, 7, 8, 10, 12, and 14. Map 11 shows a Black population of 52.4%. Hypothetically, that would mean that we would have six predominantly Hispanic districts in the City of Los Angeles per my map with one predominantly Black district.

In conclusion, as our LA City Council Redistricting Commission, and later, as the Los Angeles City Council considers maps for adoption, please consider these factors such as necessary resources for our “Communities of Interest.”

(Chris Rowe a 43-year resident of West Hills, CA, is a Public Health and Environmental Health Advocate. She was employed at Northridge Hospital, Tarzana Medical Center, and West Hills Hospital while in pursuit of her college degrees. She has a B.S. in Health Education from CSUN. Chris is a former member of the West Hills Neighborhood Council and served on committees of the Woodland Hills Warner Center Neighborhood Council. She writes a blog on the USC / Annenberg School of Health Journalism site. She has written for the Daily News, OURLA.ORG, RonKayeLA.org, and for CityWatch.) Photo Credit: Max Sullivan.  Edited for CityWatch by Linda Abrams.