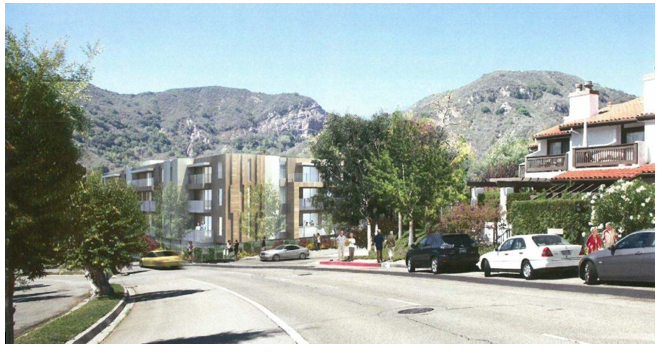 NEIGHBORHOOD POLITICS--Emails obtained by Circling the News reveal that City officials know the proposed elder care facility in the Highlands was too large per City code. The proposed 64,646 sq. ft. building should be no larger than 52,274 sq.ft.

To determine the building size, the allowable Floor Area Ratio of 1.5 is multiplied by the lot size minus setback areas (43,098 sq. ft. – 8,249 sq.ft. = 34,849 sq. ft.). The proposed building is 12,370 sq.ft. or 23 percent larger than the City ordinance allows. (Graphic above: The proposed Highlands eldercare building is too large by code. Rendering: Urbanize LA)

Opponents of the project had argued the building was too large. A West Los Angeles Area Planning Commission meeting was scheduled for the evening of April 18, this year, to hear an appeal.

“There’s an eldercare project in the Pacific Palisades area where that’s [sic] going to appeal tonight [April 18]. One of the things the applicant, Kevin McDonell [attorney for the developer Shram] mentioned was that he was told by the either the counter of case management that in determining the floor area allowed, the lot area could be considers as the buildable area. The property is zoned C1. . .I was looking through the Code and the definition section and could [sic] find anything for such (The definition section did not state the C1 zone in which lot area could be considered as buildable area). If there is a section in the Code that states this, and if so, could you point me to it?”

Huynh replied 40 minutes later “12.03 definition for buildable area allows only the C2, C4 and C5 zones to consider lot area as buildable area. C1 zone is not included. I checked our case management file and looked through the meeting minutes of their pre-development meeting. It states that they understood that buildable area for C1 Zone is lot minus setbacks.”

Chu then sent an email to the developer’s lawyer alerting him of the findings, and also to Oscar Medellin, a Deputy City Attorney in the Land Use Division of the City Attorney’s office:

“The applicant’s rep stated that if DBS requires to build at a lower floor area, they would. The rep said he runs into this situation all the time. They will proceed with the appeal case and address the issue when it comes up.”

Medellin responded, “I think the issue over floor area will prevent the APC from being able to make the required findings for both the CDP [Coastal Development Permit] and Site Plan Review. I think they need to see the version of the project that is allowed under the code before making these findings.”

Medellin’s reply was sent to McDonnell, but not to the Pacific Palisades Residents Association or any others who had registered a protest.

At the meeting that night, the developers sidestepped the size argument and said that they had pre-plan meetings with the City and that the approval of the 64,000 sq.ft. was the maximum the building could be.

Neither Chu nor Medellin spoke about the Code violation at the meeting. The APC Commissioners did not address the size violation but approved the project.

CTN asked, “If the Eldercare project had followed code, the building size would have been educed from 64,646 sq. ft. to 52,274 sq. ft. If Chu had made that public that evening, would it have changed your recommendation?”

A November 18 email from APC to CTN stated, “Your email will be shared with the West L.A. Planning Commission.”

On November 7, CTN sent an email to developer Rony Shram: “I would like to do an update on the Eldercare facility. Other than a grading approval in April, has anything else been approved by the City?

“Additionally, I was told the proposed building (64,646 sq. ft) size, is 23 percent more than allowed by code.  That to figure the building size, you take the lot area minus the setback area (buildable area-not lot size), which means the building should be no more than 52,274 sq. ft. Is this correct?”

Shram has not responded.

CTN sent an email to LA City Planning and Chief External Affairs Officer Yeghig L. Keshishian about the proposed building size, and he responded on November 21.

“The project’s permitted buildable area was discussed during the deliberations of the project at the West LA Area Planning Commission meeting,” he said. “Among others, it was raised by one of the appellants.

“The applicant did not however seek a deviation from the zoning code to allow a larger building than what would be allowed by-right,” Keshishian said. “The applicant will need to demonstrate compliance with the zoning regulations at the time they apply for a building permit.”

The Pacific Palisades Community Council Land Use Committee was also not informed of the variance in code. According to the PPCC’s website: “It is PPCC’s policy to review those projects only where variances or other code waivers are requested by the applicant, or when there is substantial community interest in a particular project.”

The PPCC never discussed a waiver.

(Sue Pascoe is a journalist and writes for Pacific Palidsades’ Circling the News.)