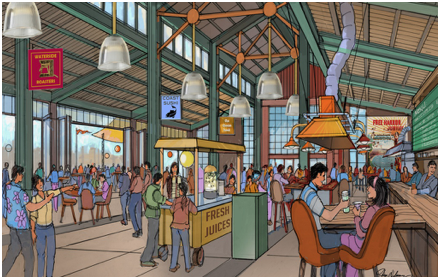 NEIGHBORHOOD POLITICS--When I first moved to Pedro in 1973, there was a lying crook in the White House, massive demonstrations in the streets of America and an unpopular war in a distant land. The wisdom of pursuing that war and its most infamous alibi that “we had to destroy the village to save the town” was as arrogant and stupid then as it is now. Not much has changed except the players in this rather dark Shakespearean drama and the village this time is our own. Back to square one, it seems. The past is our future.

Then, as now, San Pedro’s and Los Angeles’ civic leaders were hell bent on building a reimagined San Pedro. Beacon Street was one of our most notorious districts –– known by sailors from around the world as being one of the roughest ports on the coast.

Did they actually call it the “Barbary Coast”?

It was colorful and full of characters and a ton of bars and brothels to boot that totaled 73 by one count before Beacon Street was destroyed.

A few of the old names and buildings were saved. Years later, a new generation of community leaders would mourn the loss of old Beacon Street’s history and offer a newer perspective on the role of architectural history. The term “adaptive reuse” has become the buzzword du jour. The recent example of this is Pappy’s Seafood restaurant that took 301 West Sixth Street back to the bricks of its origins, making what was old new again.

Part of the patio in my 1917 California bungalow home has some of the original bricks from Ol’ Beacon Street. My century-old dwelling is now part of the Historic Preservation Zone in the blocks just south and west of old Beacon Street.

Preservation is not what can be said for the Starbucks that was allowed to build on the corner of 9th and Gaffey streets after the demolition of the aging Doggy Diner and TC’s Bar. We now have a brand new cookie-cutter Fort Apache-looking prefab drive-thru on one of the most iconic corners of our Great Street. Progress at last!

Now, the same is about to happen with our 61-year-old Ports O’ Call Village and restaurant.

Unbeknownst to the public, while we were awaiting progress on the popularly supported Waterfront Promenade, the LA Waterfront Alliance development team and the Port of Los Angeles were huddled behind closed doors and “negotiated” the lease for the Ports O’ Call property. During those negotiations, the port guaranteed that the property would be scraped-clean before turning over the property.

This seems almost inconceivable seeing as how both Wayne Ratkovich and the Johnson brothers of Jerico (the developers) have somewhat long histories in adaptive reuse and have done some reputable projects like the Wiltern building on Wilshire Boulevard, and the John T. Gaffey and Brown Bros. buildings in San Pedro. Why then would they allow for the destruction of some of the more interesting and historic structures along our waterfront just to create a version of — and I’ve heard them say this — San Francisco’s Fisherman’s Wharf?

We are getting caught up in Mayor Eric Garcetti’s exuberance. In a released statement, the mayor touted the city’s soaring economy, saying:

We are powering Los Angeles’ economy to new heights every year, because we know that lasting prosperity means investing boldly in jobs, opportunity, and growth… The expansion of our travel and tourism sector, and the success of our port, tell the story of a city whose moment has arrived — and we will continue pushing forward as we expand our role on the world stage, and prepare to welcome the Olympic and Paralympic Games in 2028.

This as the rumors swirl that his sights are set on running for the Oval Office.

Yes, the Los Angeles economy in parts is expanding, evidenced by the housing crisis, pushing the growing population of homeless people on our streets and the influx of migrants from Echo Park and (the town formerly known as) Venice to the last affordable part of Los Angeles by the water — San Pedro. All this boom-time economy will gentrify many of our neighbors out of their homes and jobs and we will end up losing both our history and culture in the process.

Most of the time we get none of the above and until the “new” plans and designs for Ports O’ Call Village are revealed — maybe as soon as the Jan. 25 Harbor Commission board meeting. We don’t know what exactly we are getting. This newspaper has filed a Public Records Act request demanding the port release these plans that have been privately circulated but not presented in a public forum as of this date.

What we do know at this point is that 20-some small merchants have been evicted and driven out of business and that Ports O’ Call restaurant and the commercial boat operators are under threat of the same action. This is not what I, and many others, remember of the promises made to the community. Stupidly we didn’t get it in writing.

As of Jan. 23, the Central San Pedro Neighborhood Council passed the following resolution:

The Central San Pedro Neighborhood Council calls for the immediate halt of all Ports O’ Call tenant evictions due to the Port of Los Angeles failing to adequately disclose subsequent amendments to the 2009 approved Environmental Impact Report regarding Ports O’ Call redevelopment and keep the CeSPNC and the public informed. The POLA has also not revealed in advance how these amendments will fundamentally change the previous plans and commitments made publicly that will substantially alter the waterfront development.

Therefore, the Central San Pedro Neighborhood Council further resolves to call for transparency regarding Ports O ’Call redevelopment, [that] a public hearing on renegotiations of the lease with LA Waterfront Alliance and their new plans be held including but not limited to the preservation of historic buildings, and a guarantee for the opportunity to retain existing tenants through the negotiations of new leases that would include Ports O’ Call Restaurant, commercial boats, and others.

And if the Port of Los Angeles fails to follow the Central San Pedro Neighborhood Council’s recommendations the council demands decisions regarding the Ports O’ Call lease to be transferred to the Board of Referred Powers, at Los Angeles City Council for review and approval.

To date, this is the strongest community response to the destruction of Ports O’ Call Village and has the growing support of many in this community who both fear and desire redevelopment on the waterfront, but are increasingly posing the questions, “At what cost and to whose benefit?”

Clearly, we cannot allow for the failed policy of destroying the village to save the town to be executed once again in such a way that demolishes both our history and culture just because some folks want to “rebrand” this town into something less than what it already is — authentic!

Editor’s note: Just before press time we received the 2016 Ports O’ Call plot plans which did not include elevations.

(James Preston Allen is the founding publisher and executive editor of RLnews in which this piece was originally published. He has been involved in community affairs for more than 40 years in the Los Angeles Harbor Area.) Prepped for CityWatch by Linda Abrams.